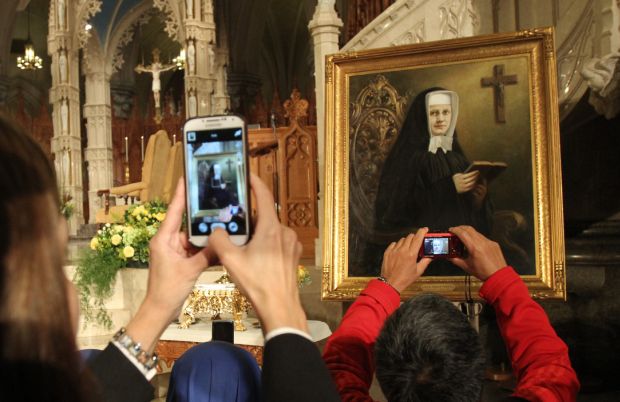 People take photos of a portrait of Blessed Miriam Teresa Demjanovich following her beatification Mass at the Cathedral Basilica of the Sacred Heart in Newark, N.J., Oct. 4. (CNS photo/Gregory A. Shemitz)

NEWARK, N.J. (CNS) — More than 2,200 people packed the Cathedral Basilica of the Sacred Heart in Newark Oct. 4 to celebrate the first beatification liturgy in the United States.

Sister Miriam Teresa Demjanovich, a Sister of Charity of St. Elizabeth from Bayonne, was given the title “blessed” in a joyful ceremony conducted in three languages — English, Latin and Slovak.

Blessed Miriam Teresa died in 1927 at age 26. Pope Francis paved the way for her beatification in December 2013 when he accepted that, through her intercession, Michael Mencer, a young New Jersey boy, was cured in 1963 of blindness caused by macular degeneration.

Cardinal Angelo Amato, prefect of the Congregation for Saints’ Causes, was the principal celebrant of the liturgy. He was joined by Archbishop John J. Myers of Newark; Archbishop Carlo Maria Vigano, apostolic nuncio to the United States; Bishop Arthur J. Serratelli of Paterson; Bishop Kurt Burnette of Byzantine Catholic Eparchy of Passaic; Cardinal Theodore E. McCarrick, retired archbishop of Washington; and six other bishops and more than 100 priest concelebrants.

The 20-minute processional included Mencer, now 58, and his family, members of Blessed Miriam Teresa’s family and hundreds of Sisters of Charity.

Blessed Miriam Teresa was born in Bayonne in 1901 to Slovakian immigrant parents. She was baptized and confirmed in the Byzantine Catholic rite. The young woman graduated with honors from high school and college, cared for her ailing parents until their deaths, and taught Latin and English in a high school run by the Sisters of Charity.

Although she hoped to join a contemplative order, Blessed Miriam Teresa was rejected because her poor eyesight made it impossible for her to sew vestments the nuns made to support themselves. She entered the Sisters of Charity in 1925.

At her Benedictine confessor’s request, Blessed Miriam Teresa anonymously wrote a series of articles on religious life, which he presented as talks to her fellow novices. Her health declined dramatically and she was allowed to make her final vows early, in anticipation of death. 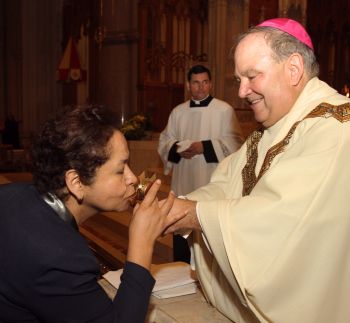 A woman venerates a relic of Blessed Miriam Teresa Demjanovich contained in a reliquary held by Coadjutor Archbishop Bernard A. Hebda of Newark, N.J., following the the Sister of Charity’s beatification Mass at the Cathedral Basilica of the Sacred Heart in Newark Oct. 4. (CNS photo/Gregory A. Shemitz)

After the young sister’s death May 8, 1927, her writings were published as a book, “Greater Perfection.” Father Benedict Bradley, the confessor, wrote: “I thought that one day she would be ranked among the saints of God and I felt it was incumbent upon me to utilize whatever might contribute to an appreciation of her merits after her death.”

Confidantes said Blessed Miriam Teresa described having a vision of Mary during college and an encounter with St. Therese of Lisieux while in the novitiate.

In 1945, the bishop of Paterson opened an examination into Blessed Miriam Teresa’s life and virtues; the Sisters of Charity established a prayer league in her honor; and, in 1954, the Paterson Diocese opened her cause.

In 1963, a sister in her community gave young Michael Mencer a small round prayer card with a strand of Blessed Miriam Teresa’s hair to bring home to his mother. The boy was rapidly losing his vision to juvenile macular degeneration and could no longer see what was in front of him.

At the beginning of Mass, Cardinal Amato read a letter from Pope Francis declaring the Sister of Charity “blessed” by virtue of her “ardent adoration of the Most Holy Trinity” and “strenuous witness (that) is evidence of her evangelical love.”

The congregation burst into applause as a gold-framed oil portrait of the young sister was unveiled in the sanctuary and people in procession placed items on a table in front of it. Mencer carried a relic of Blessed Miriam Teresa and other members of her family, congregation and promoters of her cause brought flowers.

Deacon Stephen Russo intoned the Gospel in Slovak and English. In his homily, Bishop Serratelli said Blessed Miriam Teresa did the will of God with all her might. “Filled with the knowledge of sacred Scripture, she anticipated Vatican II’s emphasis on the word of God as the source of authentic spirituality for all,” he said.

“In our secularized age that often shuns solitude and silence, God is giving us, from among those who leave the world for Christ, a new blessed who was, in the words spoken at her death, a living ‘monstrance that silently showed forth our Lord to all who passed by,'” the bishop said.

Sister Barbara Connell, a Sister of Charity and one of Blessed Miriam Teresa’s promoters, told Catholic News Service the event was exhilarating. “I have difficulty wiping the smile off my face. You work so hard for something, it becomes part of your life and today it is a reality: She is declared blessed.”

Sister Connell said she hopes the beatification will help spread Blessed Miriam Teresa’s message that all people are called to holiness, wherever they are in their state in life. “If we do God’s will as we believe he wants us to do it that day, that is a recipe for holiness and that was Miriam Teresa’s recipe,” she said.

Archbishop Myers said the beatification was in the United States, because “in recent years, there has been an effort by the Vatican to bring these important liturgies to the actual countries where the saints are from.”