Amid insurgency, Iraqi priest is guardian angel of ancient manuscripts 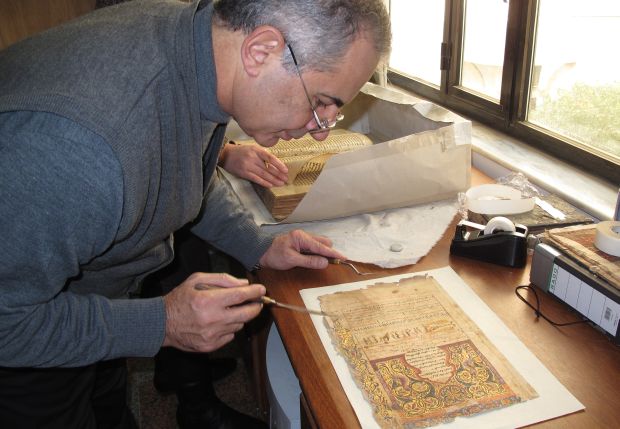 Though operating on a much smaller scale, Dominican Father Najeeb Michaeel and the ancient manuscript collections in his care still face a very real threat.

Islamic State militants have been sweeping across the northern Iraq region in their bid to establish an Islamic state. Their campaign has become increasingly brutal in recent months as they continue to lay siege to unprotected towns and villages, murder hostages, threaten residents, confiscate property and, by many reports, desecrate or ransack religious places of worship.

The Dominicans’ collection of medieval manuscripts and valuable documents that already survived centuries of conflict and potential neglect were now under threat once again.

Early Aug. 6, the Feast of the Transfiguration, the residents of Qaraqosh woke up to the news that the Kurdish regional forces, known as peshmerga and who had been repelling militant incursions, had packed up and left the city in the dead of night.

“The people woke up and realized they had no protection” and they started scrambling to evacuate the city, said Benedictine Father Columba Stewart, director of the Hill Museum and Manuscript Library at St. John’s Benedictine Abbey in Collegeville, Minnesota, who has been helping Father Michaeel with his preservation work since 2009.

People had to flee on foot as the limited number of vehicles were being used to shuttle children, the ill and the elderly out of the city, he told Catholic News Service Oct. 21 from Collegeville.

Father Stewart said Father Michaeel was able to save “really important patriarchal manuscripts” from the Chaldean Patriarchate in Baghdad that recently had lent their collection to him for digitizing.

The wave of townspeople, including Father Michaeel, walked 40 miles in scorching August heat to Irbil, capital of the Kurdish region of Iraq, carrying whatever they could, said Father Stewart, who remains in almost daily contact with the Iraqi priest.

Just hours before militants invaded, they were able to truck the manuscripts, leaving behind the laboratory and digitizing equipment that had been provided by funding through the Hill Museum and Manuscript Library.

Now, in addition to preserving the manuscripts, the priest and his community provide the lion’s share of care of the refugees’ suddenly fragile lives because so many lack any shelter and support, Father Stewart said.

Father Michaeel started collecting and preserving the nation’s cultural and religious heritage as recorded on the manuscripts in the 1980s.

He persuades manuscript owners, monasteries and churches to let him borrow their works to be cleaned and digitized; he then returns the restored originals and gives digitized copies to the owner and specialized archives.

The priest also built a collection of some 750 manuscripts from the Dominican community.

Father Stewart said the early European Dominicans in Iraq “were the first cultural anthropologists” in the area. “They described what they were seeing and left very interesting records,” he said, documenting “their work and the communities they ministered to.”

The Dominicans have been in Iraq for so long, “there’s a lot of depth” and history in the collection, Father Stewart said.

Luckily, Father Michaeel already had digitized the collections in the Mar Behnam Syriac Catholic Monastery, which is now behind the front lines of the militants and rumored to have been destroyed or burned down, Father Stewart said.

Father Michaeel and his staff of six to eight local Iraqis use a simple, inexpensive technique of photographing manuscript pages with a high-end 35mm camera and flash strobe lights for illumination. The digital images are stored on a hard drive, which is then sent to Collegeville.

Staff at the Hill Museum and Manuscript Library then makes multiple backups, organizes the data, catalogues it and puts it online for scholars, Father Stewart said.

All training, funding and equipment for Father Michaeel’s work come through the donations, grants and foundation money pulled together by Father Stewart.

Father Stewart said Father Michaeel and his restoration team have made digital copies of 5,000 manuscripts with the library’s support. “It’s amazing what they’re doing on their own,” he said.

They will be getting new equipment as they settle in Irbil, he said, with now a second exodus under their belt. They were uprooted from Mosul in 2008, when the entire Dominican community left, many for Qaraqosh, in the wake of mounting kidnappings and threats against religious.

Father Stewart said as the Iraqi people, especially Christians, continue to be pushed out of their homes and their country and settle elsewhere, their history and heritage gradually will be lost.

“These are communities that no longer exist” as the people have scattered and their traditions fade away, he said.

When communities disappear, their heritage goes with them, he added, so these manuscripts and documents will most likely end up being the only memories that survive.

Even though “they are digital surrogates, it’s not the best, but they are better than nothing,” he said.

The museum and its funders will continue to support the preservation work because, Father Stewart said, “it’s a tiny investment for such a huge boon of conserving cultural memory.”

More information about the Hill Museum’s work can be found online at www.hmml.org/.