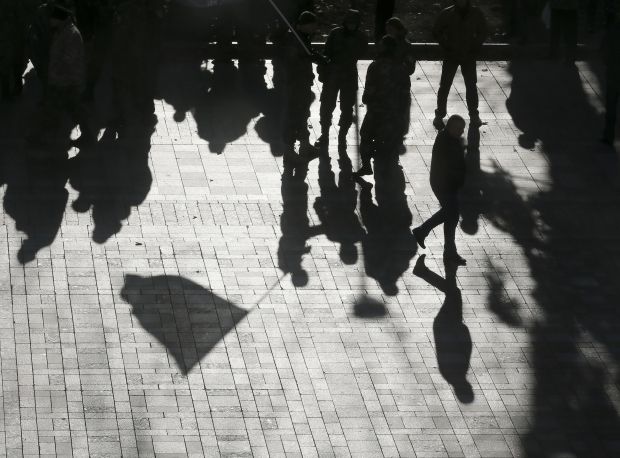 Shadows of Ukrainian soldiers holding a flag in Kiev, Ukraine, are seen, Oct. 20, as they stand guard near the parliament building. Leaders of the Ukrainian Catholic Church said they see a new Ukraine emerging as their country prepares for upcoming elections. (CNS photo/ Sergey Dolzhenko, EPA)

KIEV, Ukraine (CNS) — The task of the Catholic Church is not only to teach people how to pray, but how to live authentically Christian lives, two leaders of the Ukrainian Catholic Church said.

The church’s ministers also have an obligation to accompany, support and minister to their followers in the midst of strife and even danger, said Archbishop Sviatoslav Shevchuk, major archbishop of Kiev-Halych, and 81-year-old Cardinal Lubomyr Husar, the retired head of the church.

That belief led the two leaders and fellow priests to Kiev’s Independence Square — the Maidan — from November 2013 to February 2014 in long-term protest against the government of former President Viktor Yanukovych. At one point, government forces opened fire on the protesters in February, killing more than 100 people.

The “smell of the sheep” Pope Francis has said bishops should have ended up being the smell of tear gas, fire and blood, Archbishop Shevchuk told reporters in Kiev Oct. 21.

Yanukovych, the pro-Russia president who triggered the protests when he refused to keep his promise to lead Ukraine to associate membership in the European Union, was forced to flee Ukraine in February in the midst of overwhelming public outrage.

Claiming he was protecting Russian-speaking Ukrainians, Russian President Vladimir Putin invaded, and then annexed, Crimea. Pro-Russian separatists, widely thought to be working with the Russian Army, then tried to take over the far eastern regions of Ukraine.

Even though a cease-fire was signed in mid-September, the fighting and death continued in the Donetsk and Luhansk regions in late October. Except for in the war-torn regions, Ukrainians were scheduled to go to the polls Oct. 26 to elect an entirely new 450-member parliament.

Archbishop Shevchuk was a 19-year-old draftee in the Soviet army when his church was legalized and fresh out of the army when Ukraine became independent two years later in 1991. He said what happened at Maidan in February — a protest originally led by university students and other young people — “pleased me” because it showed that “we already have a new generation of free people.”

“Twenty-three years ago, we received an external freedom,” he said. “That freedom was only a chance, only a possibility. But millions of Ukrainians, through these last 23 years, were going through a process of inner liberation. It is not easy to be a free man or a free woman.”

The protests, he said, proved there really was a free Ukraine, a nation of citizens ready to take responsibility for their future, which was something that did not exist on a social level even 10 years ago. “What surprised me was that that free Ukraine was not understood by the politicians. Many of them continue to be ‘homo Soveticus,'” trying to rule the country according to a model “that is out of time and finally failed,” Archbishop Shevchuk said.

“That free Ukraine was manifested in such a beautiful and strong way. Nobody would give up their freedom anymore,” he said. “The post-Soviet Ukraine does not exist anymore. And in these upcoming elections, if those politicians applying to be deputies bring to parliament the old Soviet ideology and way of building our country and create some sort of new oligarchy or political elite in the old-fashioned style, the rebellion will continue. The free Ukraine will not accept such a policy.”

Archbishop Shevchuk said Catholic leaders in Ukraine are not endorsing any of the two dozen parties or any individual seeking a seat in the new parliament.

“We are telling our people how to build a new society in Ukraine,” he explained. “We, as representatives of the church — which is supposed to be mother and teacher — we are preaching on values and divine moral law. We are trying to foster freedom in our faithful to teach them to be able by themselves to discern who is able to realize, fulfill their aspirations, who they will trust to build Ukrainian society according to their own vision and view, desires and needs.”

Meeting reporters Oct. 20 in a Kiev apartment serving as an Eastern Catholic Studite monastery, Cardinal Husar, said that while the Soviet Union’s anti-religious propaganda did not wipe out faith among Ukrainians, it left scars including almost an expectation that government officials would be corrupt and a willingness to participate in that, even on a very local, petty level.

Since the re-legalization in 1989 of the Ukrainian Catholic Church, one of the Eastern churches in full union with Rome, and Ukraine’s independence in 1991, Cardinal Husar said, “the churches in Ukraine have been very active in trying to help people to be believers, practicing Christians.”

“We are convinced that the churches have to play a very important role in the social development of society,” he said, in order to help “make up for what has been lost in the past” under communism. Like the Catholic Church in Poland in the 1980s did, the churches of Ukraine need “to preach social virtues very insistently,” teaching people to pray, but also how to be practicing Christians at home and in their relations with the nation.

“We do not wish to take part in political machinations, political actions, but we wish to bring up the level of religiosity of the people so that they would try, as Christians consciously trying to live out a Christian live, to build up their state,” the cardinal said.

For the cardinal, Maidan marked “a great turn in our history,” a moment when the Ukrainian people — who had been “still feeding on the Soviet traditions” — realized their government truly had an obligation to respond to their needs and wishes and not steal from them.

“This ‘revolution of human dignity,'” he said, will not last without the participation of the churches, not in politics, but in “preaching justice, preaching truthfulness, preaching desire to help one another in daily social life.”

NEXT: Amid insurgency, Iraqi priest is guardian angel of ancient manuscripts