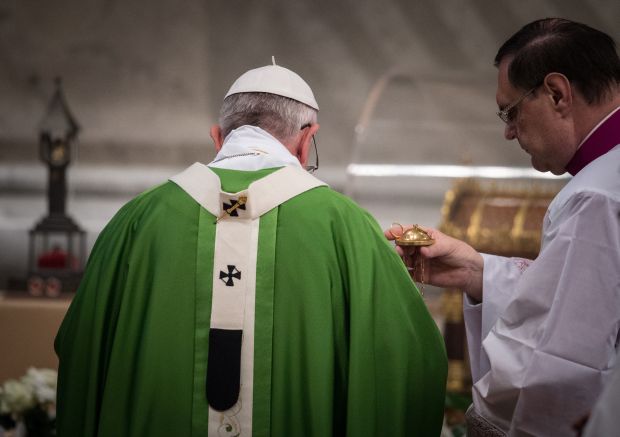 Pope Francis uses incense to venerate the relics of two married couples who have been declared blessed by the church as he arrives to celebrate a Mass to open the extraordinary Synod of Bishops on the family in St. Peter's Basilica at the Vatican Oct. 5. (CNS photo/CNS photo/Marcin Mazur)

VATICAN CITY (CNS) — The first two married couples beatified as couples and St. Therese of Lisieux were being honored during the extraordinary Synod of Bishops on the Family.

The relics of St. Therese, her parents Blessed Louis and Marie Zelie Guerin Martin, and Blessed Luigi and Maria Beltrame Quattrocchi, were to be in Rome’s Basilica of St. Mary Major for the duration of the synod Oct. 5-19.

Before the synod’s opening Mass in St. Peter’s Basilica Oct. 5, Pope Francis venerated the relics, which were brought to St. Peter’s just for the Mass. Their presence and prominence underlined the importance of St. Therese and the blessed spouses for today’s families.

Blessed Luigi and Maria Beltrame Quattrocchi became the first married couple to be beatified together; declaring them blessed 2001, St. John Paul II called them models of holiness for all Christian spouses.

The husband was an Italian civil servant, a church activist and promoter of social welfare, who eventually became the country’s assistant attorney general. He died in 1951. When his wife was pregnant with their fourth child, doctors told her that she would die unless she aborted the baby. The couple decided they couldn’t do that; a daughter was born in 1914 and the mother lived another 51 years.

All four children became priests or religious. Testifying to their parents’ holiness, as adults they said the couple seemed like ordinary parents at the time — they suffered through hardships and disease, argued a little, but mostly treated each other with a deep respect and love.

But the kids also tested their parents’ patience, Father Paolino Beltrame Quattrocchi told Vatican Radio in 2001. “When it was needed, they gave us punishments, reprimands and sometimes even a good slap. The worst punishment was to go to bed without a goodnight kiss, and that caused a lot of crying on the pillow. But Mom always came later and so did the kiss.”

Father Quattrocchi recalled that his parents never really fought, but they disagreed sometimes and would exchanged hard words. “They had their contrasts in ways of seeing things, but it was always about secondary things. Afterward, they would apologize to each other,” he said.

When St. John Paul announced in 1997 he would declare St. Therese of Lisieux a doctor of the church, he said that the humble and poor “Therese shows the ‘little way’ of children who confide in the Father with ‘bold trust.’ The heart of her message, her spiritual attitude, is for all the faithful.”

She became known as St. Therese the Little Flower because she referred to herself as a little, not particularly important flower in God’s garden. Pope Francis has said he has a particular devotion to this French saint, who died of tuberculosis at the age of 24 in 1897.

She described the basis of her spirituality as “the confidence of the little child who sleeps without fear in its father’s arms.”

Her parents were beatified in 2008, making them the second married couple to be beatified as a couple. They were also the first parents of a saint to be beatified, highlighting the important role parents play in their children’s human and spiritual upbringing.

In a message read at the beatification Mass, Pope Benedict XVI wrote that the Martins had “proclaimed the Gospel” through their exemplary lives, passing on their “ardent faith” to their children. He wrote he hoped their example would be “a source of joy and hope for all parents and all families.”

The “secret of success” of the Martins’ Christian life, Cardinal Jose Saraiva Martins said at their beatification Mass, had been their readiness to “walk humbly with God in seeking the advice of the Lord,” while also “placing all aspects of their lives in harmony with church teachings.”

The cardinal said the Martins were a “gift to parents,” widows and widowers, and those facing illness and death.

Marie Zelie Guerin married Louis Martin, a watchmaker and jeweler, in 1858. She died of cancer in 1877, at the age of 46; Louis died when he was 71 in 1894. The couple had nine children, but four of them died in infancy. The five who survived all entered religious life.

In a “Letter to Families” in 1994, St. John Paul said many married couples display heroic holiness “even if they are not well known or have not been proclaimed saints by the church.”

Even during the most difficult circumstances, the family is always the “seed bed” or “nursery of holiness,” he had said; the family is the place where people learn about God, about prayer and about self-giving in service to others.

NEXT: On eve of family synod, pope prays for ‘open and fraternal’ debate