On eve of family synod, pope prays for ‘open and fraternal’ debate 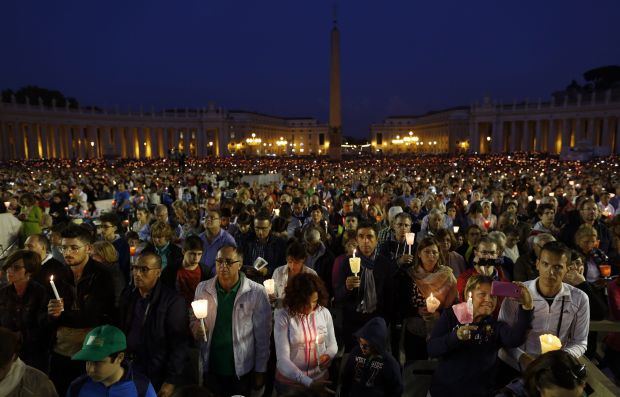 People attend an Oct. 4 prayer vigil led by Pope Francis for the extraordinary Synod of Bishops on the family in St. Peter's Square at the Vatican. (CNS photo/Tony Gentile, Reuters)

VATICAN CITY (CNS) — Hours before opening a Synod of Bishops whose members have already started a public debate over Catholic teaching on marriage and sexuality, Pope Francis prayed the bishops would express themselves and listen to each other openly, trusting in God to reconcile their differences.

“Let us invoke openness to a sincere, open and fraternal exchange of views, that it might lead us to take pastoral responsibility for the questions that this changing time brings with it,” the pope said Oct. 4. “Let them fill our heart, without ever losing peace, but with serene trust that in his time the Lord will not fail to lead us back to unity.

“Doesn’t the history of the church perhaps tell us of so many analogous situations, that our fathers knew how to overcome with stubborn patience and creativity?” he said.

Pope Francis spoke in St. Peter’s Square during a prayer vigil for the Oct. 5-19 synod, which is slated discuss a range of “pastoral challenges of the family” in preparation for a larger world synod in October 2015. The pope was scheduled to open the synod with Mass in St. Peter’s Basilica Oct. 5.

One of the most discussed topics at the synod promises to be the eligibility of divorced and civilly remarried Catholics to receive Communion.

By church law, such Catholics are not admitted to Communion without an annulment of their first, sacramental marriage, unless they abstain from sexual relations with their new partners. Pope Francis has said the predicament of such Catholics exemplifies a general need for mercy in the church today.

A proposal by German Cardinal Walter Kasper to make it easier for people in such situations to receive Communion has met with public opposition from several prominent members of the synod, including the Vatican’s doctrine and finance chiefs and the head of its highest court.

Pope Francis, who would make the final decision on any change, has not expressed his view, but he invited Cardinal Kasper to present his proposal at a gathering of the world’s cardinals in February.

At the prayer vigil, the pope spoke generally about the need for pastoral solutions suited to the present day.

“We must lend an ear to the rhythm of our time and perceive the odor of people today, that we might be imbued with their joys and hopes, their sadness and anxiety: at that point we will be able credibly to propose the good news on the family,” he said.

Pope Francis has made a point of recognizing sociological realities that conflict with Catholic teaching on the family, baptizing a child whose parents had been married civilly and marrying couples who had cohabitated before their wedding.

In the spirit of such frankness, the Oct. 4 vigil featured the spoken testimonies of three Italian families, including a couple with two children who were separated for six years before reuniting with help from Retrouvaille, a retreat program of Catholic origin. The husband, identified only as Nicola, recalled his infidelity in front of more than 40,000 people in the square, minutes before the arrival of the pope.

Pope Francis emerged from the basilica shortly after 7 p.m., a quarter-hour after sunset. Many in the congregation held candles as they listened to him contrast the pleasures of the family hearth with the suffering of the lonely in the “bitter twilight of broken dreams and projects,” victims of an “individualistic culture that denatures and renders ephemeral the ties” among human beings.

“The family continues to be the unparalleled school of humanity, an indispensable contribution to a society of justice and solidarity,” the pope said. “And the deeper its roots, the farther out we are able to go, without getting lost or feeling estranged in any land.”

NEXT: Vatican summit says extremists must be stopped with sanctioned force