Hunger in a world of wasted food is a tragic paradox, pope says 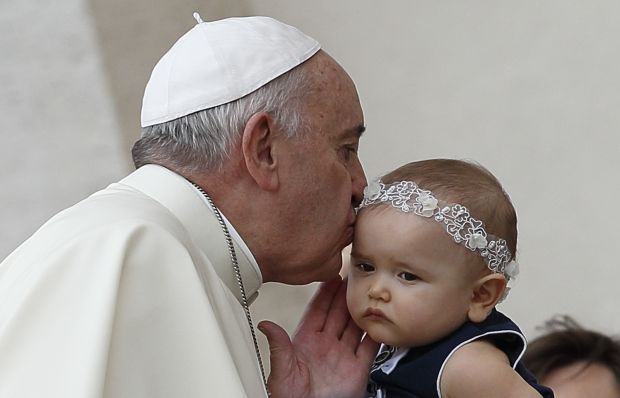 Pope Francis kisses a child as he arrives to lead his general audience in St. Peter's Square at the Vatican Oct. 15. (CNS photo/Paul Haring)

An overhaul of the entire framework of aid policies and food production is needed so that countries can be in charge of their own agricultural markets, he said.

“For how long will systems of production and consumption that exclude the majority of the world’s population even from the crumbs that fall from the tables of the rich continue to be defended?” he asked.

“The time has come to start thinking and deciding based on each person and community and not from market trends,” he said.

The pope made his comments in a message marking the Oct. 16 celebration of World Food Day, a commemoration sponsored by the U.N. Food and Agriculture Organization to highlight the global fight against hunger and the need to help farmers and farm workers.

The theme of the 2014 celebration was: “Family Farming: Feeding the World, Caring for the Earth.”

In his written message, Pope Francis said it is “one of the most tragic paradoxes of our time” that there can be so many people going hungry in a world where there is an “enormous quantity of food wasted, products destroyed and price speculation in the name of the god of profit.”

While the world witnesses this scandal with a sense of “impotence, but often with indifference, too,” World Food Day aims to remind people of the “cry of our many brothers and sisters” who lack adequate food security, he said.

Policymakers need to remember to look beyond the statistics and remember that those who suffer “are people not numbers,” he said.

“Precisely because of their dignity as persons they come before every economic calculation or plan,” he said.

“To eradicate hunger, it’s not enough to overcome the food gaps of those who are less fortunate or to assist those who live in emergency situations with help and aid,” he said.

“Rather, it is necessary to change the paradigm of aid and development policies, modify international regulations concerning agricultural production and commerce — guaranteeing countries where agriculture represents the foundation of their economy and their survival the self-determination of their own agricultural markets.”

To put people and not profits, policies and markets first, he said, there also needs to be a change in understanding what economic activities and goals, food production and environmental protection are really about.

Pope Francis praised the organization’s focus on rural family farms, saying they offer all of society an important role model of cooperation among generations and respect for natural resources.

“Who are more concerned about preserving nature for the generations that come than rural families?” he said.

The pope said the Catholic Church is “willing to offer, enlighten and guide both the development of policies and their actual implementation.”

“Faith is visible when it puts into practice God’s plan for the human family and the world through that deep and true brotherhood that is not exclusive to Christians, but includes all peoples,” he said.

PREVIOUS: Paul VI was pope of firsts, a pope of dialogue, cardinal says

NEXT: Cardinal Pell: Synod says no to ‘secular agenda’