Paul VI was pope of firsts, a pope of dialogue, cardinal says 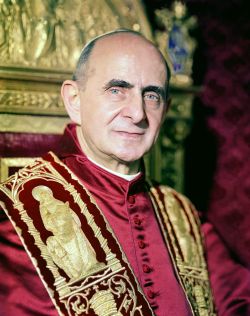 Pope Paul VI is seen in an undated official portrait.

VATICAN CITY (CNS) — Retired Italian Cardinal Giovanni Battista Re, who comes from the same diocese as Pope Paul VI did and worked for him in the Vatican Secretariat of State, described the late pope as a man rich in spirituality, a thinker and a pastor “very sensitive to the challenges of the modern world.”

Speaking to reporters Oct. 17, two days before Pope Francis was to beatify Pope Paul, the cardinal said his concern for modern men and women and his awareness that the majority of the world’s people were not Catholic, also made him “a great man of dialogue.”

Pope Paul exemplified “a dialogue respectful of others, one that listens to others and, therefore, trusts that there are values in the other, but also a dialogue that aims to proclaim God’s love for all and to proclaim the truths of the Gospel,” the cardinal said.

Pope Paul led the church from 1963 to 1978. After St. John XXIII died in 1963, Pope Paul reconvened the Second Vatican Council, presided over the final three of its four sessions and oversaw the promulgation of all of the council’s documents. He also led the process of implementing the council’s reforms.

Retired Pope Benedict XVI, who was made a cardinal in 1977 by Pope Paul, was expected to attend the Mass, according to Jesuit Father Federico Lombardi, Vatican spokesman.

Cardinal Re told reporters that Pope Paul was a “pope of firsts” … the first pope to take a plane, the first pope since St. Peter to visit the Holy Land and the first pope to give up the papal tiara. The cardinal said the pope’s renunciation of the crown was a sign that his authority did not come from earthly power and that he did not want earthly glory.

“He served the church and deeply desired that the church would serve humanity,” the cardinal said.

Redemptorist Father Antonio Marrazzo, the postulator or promoter of Pope Paul’s sainthood cause, told reporters that the now 13-year-old boy involved in the miracle accepted for the beatification would not attend the Mass, nor would his parents, who have asked that their identities not be revealed.

The postulator confirmed, however, that the miracle occurred in the United States — reportedly California — and involved a pregnant woman whose life was at risk along with the life of her baby. Advised by doctors to terminate the pregnancy, she instead sought prayers from an Italian nun who was a family friend. The nun placed a holy card with Pope Paul’s photograph and a piece of his vestment on the woman’s belly. The baby was born healthy and continues to be “completely healthy,” Father Marrazzo said.

The Redemptorist said that during the beatification Mass, the relic that will be offered to Pope Francis is one of two wool undershirts Pope Paul was wearing in Manila, the Philippines, in November 1970 when a Bolivian painter, dressed as a priest, stabbed him in the chest. Father Marrazzo said he did not know why the pope was wearing two undershirts that day, but both are stained with blood.

Born Giovanni Battista Montini in 1897 in the northern Italian province of Brescia, he was ordained to the priesthood in 1920 and was named archbishop of Milan in 1954. Elected pope in 1963, he died at the papal summer villa in Castel Gandolfo on Aug. 6, 1978.

NEXT: Hunger in a world of wasted food is a tragic paradox, pope says