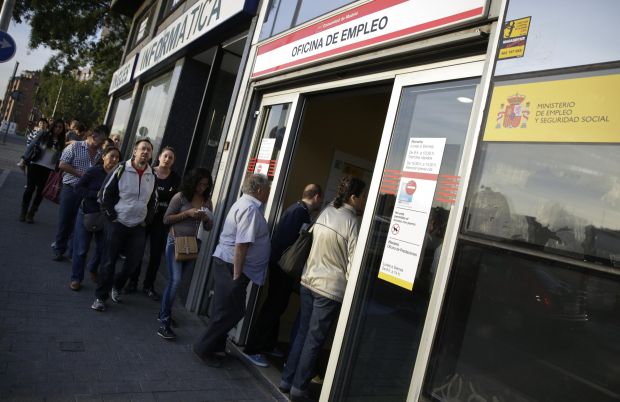 The “fundamental right to work,” he said, “cannot be considered a variable dependent on financial and monetary markets. It is a basic good in respect to dignity, the formation of a family, the realization of the common good and peace.”

Addressing members of the Pontifical Council for Justice and Peace Oct. 2, the pope praised retired Pope Benedict XVI’s 2009 encyclical letter, “Charity in Truth,” as an essential document for evangelizing Catholics’ social involvement and for highlighting the “benefits, but also the dangers of globalization when it is not oriented toward the good of peoples.”

Globalization, Pope Francis said, has produced increased wealth, but it “also has exacerbated the gaps between different social groups, creating inequality and new poverty in the very countries considered to be the richest.”

“The growth of inequality and poverty put inclusive and participatory democracy at risk,” the pope said, because a healthy democracy needs an economy which does not exclude anyone and which functions with fairness.

“The exploitation of international imbalances in labor costs” is of particular concern, the pope said, because of the strict tie between a person’s sense of dignity and his or her ability earning a living wage. Policies concentrated on increasing income by lowering labor costs “do not conform to an economy at the service of the human person and the common good,” he said.

Pope Francis noted that in his apostolic exhortation, “The Joy of the Gospel,” he highlighted three instruments necessary for greater inclusion of the neediest in social and economic life: education, access to health care and jobs.

He asked members of the justice and peace council to keep in mind the guiding theme of Pope Benedict’s encyclical, namely that love based on truth is essential for promoting peace and the good of people. The combination of love and truth, Pope Francis said, are necessary for “overcoming dangerous fanaticisms, conflicts for the possession of resources, social and economic injustices and disparities and imbalances in access to collective goods.”

PREVIOUS: Communion for some Catholics should be ‘off the table’ at synod, cardinal says

NEXT: Iraqi refugees in Jordan say it will be difficult to return home