Communion for some Catholics should be ‘off the table’ at synod, cardinal says 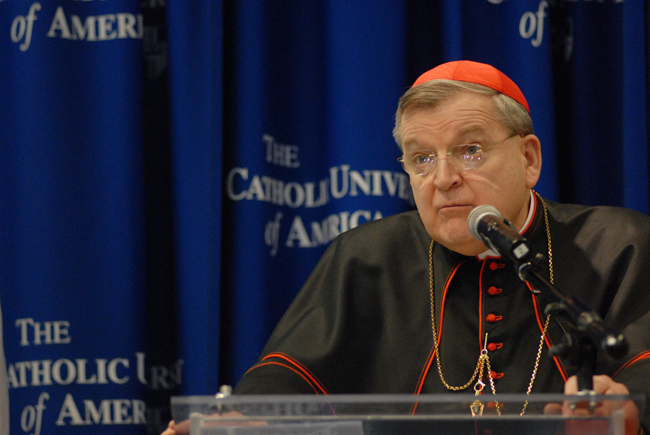 VATICAN CITY (CNS) — The highest ranking U.S. bishop at the Vatican says this month’s Synod of Bishops on the family should mark the end of a high-level debate over whether to make it easier for divorced and civilly remarried Catholics to receive Communion.

“The matter really has to be clarified at this point so that this doesn’t continue,” Cardinal Raymond L. Burke, prefect of the Supreme Court of the Apostolic Signature, told Catholic News Service Oct. 1. “For this to go on for another year, it can only do harm.”

By church law, divorced and civilly remarried Catholics are not admitted to Communion unless they obtain an annulment of their first, sacramental marriages or abstain from sexual relations with their new partners, living together as “brother and sister.”

Pope Francis has said the predicament of such Catholics exemplifies a general need for mercy in the church today. He invited German Cardinal Walter Kasper to address the world’s cardinals at the Vatican in February, when the cardinal argued that, in certain cases, the church can “tolerate something that, in itself, is unacceptable”: a couple living together as husband and wife in a second union.

The topic is sure to be one of the most discussed at the Oct. 5-19 extraordinary synod on the family, following a lively public debate at the highest levels of the church.

Cardinal Burke is one of five cardinals — three of them of synod fathers — who contributed to a new book of essays arguing against Cardinal Kasper’s proposal.

“I cannot see how (the proposal) can go forward if we are going to honor the words of our Lord himself in the Gospel according to St. Matthew, in which he said the man who divorces his wife and marries another commits adultery,” said Cardinal Burke, who heads the Vatican’s highest court. “The person who’s living in an irregular union is living in an adulterous union and therefore cannot be admitted to the sacraments until that situation has been rectified.”

While he said the debate over Cardinal Kasper’s proposal “can only be a healthy thing as long as there’s an honest and deep exchange of views on the matter,” he said protracted discussion at the highest levels has bred confusion.

“This has gone on now for several months and I see that in the media there’s the expectation that there’s going to be some change in the church’s teaching,” Cardinal Burke said. “I hear from bishops and priests that many people are coming to them and insisting that they can now receive the sacraments because they interpret that somehow the church has already changed her teaching. And that isn’t healthy.”

The October 2014 synod is not supposed to reach definitive conclusions but prepare the agenda for a larger world synod a year later, which will make recommendations to the pope. Yet, Cardinal Burke voiced hopes that church leaders would conclude their debate on the Communion question during the first phase of the process.

“What I would hope would happen at (the 2014 synod) is that this issue be clarified and it be off the table,” he said.

Pope Francis is the “first teacher of the faith,” who is expected to author an apostolic exhortation based on the two synods, but he “wanted to call the presidents of conferences of bishops from around the world to hear their thinking, and if he hears from them that there is no point in further discussion of the matter and it should be taken off the table, that would be a wonderful thing,” the cardinal said.

Cardinal Burke said he could not estimate how many of the nearly 200 bishops attending the synod might be open to Cardinal Kasper’s proposal, though he said he saw support in Europe and resistance among bishops in Africa. But he said he could not envision the German cardinal’s recommendation prevailing.

“These are bishops, these are shepherds of the flock, who are Catholic. I can’t imagine them accepting this proposal,” he said. “I don’t know quite how I would be able to digest it.”