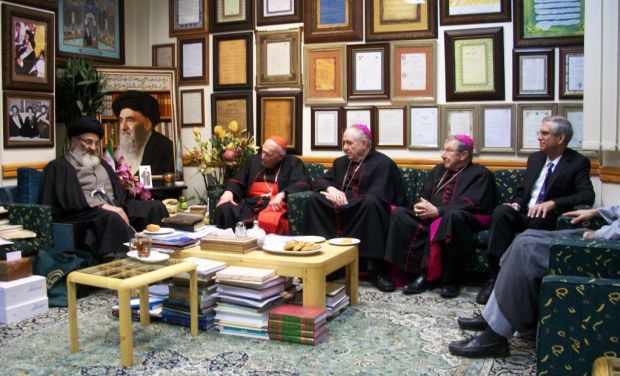 WASHINGTON (CNS) — Seven months after a delegation of U.S. bishops quietly met with Iranian religious leaders, their efforts appear to be on track to continue a dialogue on nuclear weapons and the role faith leaders may have in influencing arms policies.

At an Oct. 29 program on the dialogue and the relevance of moral questions about nuclear weapons, Bishop Richard E. Pates of Des Moines, Iowa, who met with Iranian ayatollahs in March, said among the things he learned was that Iranians “feel profoundly misunderstood by Americans.”

At the event co-sponsored by the U.S. Conference of Catholic Bishops and the Arms Control Association, Bishop Pates said the Muslim leaders said images such as crowds waving signs with messages like “Death to America” are not representative of the thinking of most Iranians — including of the people the delegation met in Iran — and have skewed impressions of the country in Western nations. Likewise, Iranians may hold distorted views of Americans, they acknowledged.

Bishop Pates, the chairman of the Committee on International Peace and Justice of the USCCB, was accompanied to Iran by Cardinal Theodore E. McCarrick, retired archbishop of Washington, who has lengthy expertise in the Middle East, and Auxiliary Bishop Denis J. Madden of Baltimore, chairman of the bishops’ Committee on Ecumenical and Interreligious Affairs, as well as by USCCB staff members and advisers.

The Muslim scholars spent a great deal of time discussing the binding importance of a “fatwa,” or religious decree, forbidding the production, stockpiling or use of nuclear weapons issued by Ayatollah Ali Hosseini Khamenei, the Shia cleric who is supreme leader of Iran, Bishop Pates said. He said the Americans pushed the ayatollahs on how durable Khamenei’s “fatwa” is in Iranian political and military leaders.

Ebrahim Mohseni, a research associate at the Center for International and Security Studies at the University of Maryland, who helped coordinate the trip, said at the program that “all the grand ayatollahs we met had the same theological opinion” about the immorality of nuclear weapons. Even if Ayatollah Khamenei should change his opinion, Mohseni said, “it would be tough to convince the others.”

Stephen Colecchi, director of the USCCB’s Office of International Justice and Peace, who was part of the delegation, said a message of the meetings was that political leaders “ignore religion as a motivator at their own peril.”

Bishop Pates said the Iranian clerics noted that the majority of terrorist acts carried out by people who say they’re acting in the name of Islam are not in the Shiite branch of Islam, but Sunni Muslims. Sunnis dominate in Saudi Arabia, Egypt, Syria and other parts of the region, while Iran is the only country where Shiites constitute a majority of Muslims.

He said the clerics wanted to know why the U.S. continues to engage with countries that they described as home to extremists, while continuing to have a contentious relationship with Iran. The clerics emphasized that even in the face of chemical weapons attacks by Iraq that they said killed 130,000 civilians during Iran’s war with its neighbor in the 1990s, Iran did not respond with chemical attacks, he said.

A reporter attending the briefing at the Carnegie Endowment for International Peace asked if the bishops pressed the Iranian religious leaders about their own country’s record of human rights abuses, particularly Iran’s frequent use of the death penalty.

Bishop Pates said the dialogue “didn’t get to capital punishment,” but that the subject could come up in future discussions.

Although the dialogue trip was publicized two months after the delegation returned, when participants finally had the chance to brief the White House and State Department on the visit, the effort has had a low profile in the United States. Mohseni said there was publicity in Iran about the Catholic delegation, but partly because it happened to coincide with visits to Iran by other faith-based delegations.

“Most reports saw it as positive,” Mohseni said, and there was no official response from the government.

In June, Bishop Pates and Cardinal McCarrick signed a joint declaration decrying the use or threat of use of nuclear weapons, along with two Iranian Shiite leaders, Ayatollah Ali-Reza A’arafi, senior member of the Supreme Council of the Society of Qom Seminary Scholars and president of Al-Mustafa International University; and Abdul-Majid Hakim-Elahi, director of the international affairs office of the Society of Qom Seminary Scholars.

In a related step, in an Oct. 30 letter to U.S. Energy Secretary Ernest Moniz, Bishop Pates voiced concern about the expanding federal budget for nuclear weapons — $335 billion over the next decade, largely to modernize nuclear capabilities.

“The current U.S. plan to maintain and upgrade its nuclear arsenal undermines the quest for nuclear disarmament,” the letter said. Bishop Pates cited Pope Francis and the Vatican’s delegation to the United Nations in comments decrying the modernization of nuclear weapons stockpiles.

“The projected expenditure of $35.5 billion per year for nuclear weapons contrasts with the president’s proposed 2015 budget of about $20 billion for poverty-focused international assistance,” the letter said.

“Allocating money to modernize nuclear forces does not help achieve the goal of a world without nuclear weapons, nor to address the underlying causes of war,” Bishop Pates wrote. “I encourage you to pursue other options, including non-proliferation efforts and diplomacy, to promote U.S. and global security.”

NEXT: Did Pope Francis get what he wanted from the synod?