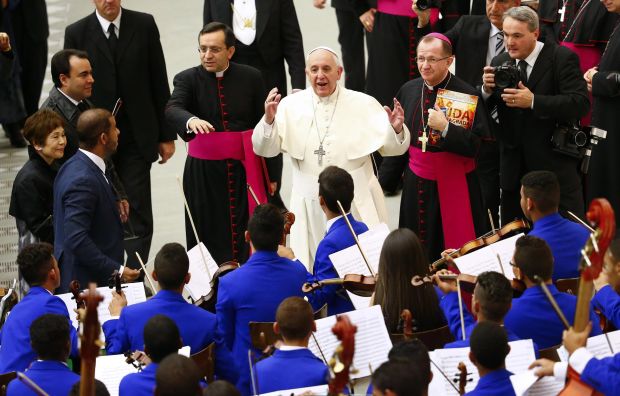 Pope Francis talks to members of an orchestra during a special audience with members of the Catholic Fraternity of Charismatic Covenant Communities and Fellowships at the Vatican Oct. 31. (CNS photo/Tony Gentile, Reuters)

“When we inhale, by prayer, we receive the fresh air of the Holy Spirit. When exhaling this air, we announce Jesus Christ risen by the same spirit,” Pope Francis told members of the Catholic Fraternity of Charismatic Covenant Communities and Fellowships.

The pope met Oct. 31 with about 1,000 charismatic Catholics and their Protestant guests who were participating in a conference about the charismatic movement and new evangelization.

Although most of his speech focused on the charismatic practice of prayers of praise, Pope Francis also encouraged prayers of intercession, “a cry to the Father, for our Christian brothers and sisters who are persecuted and murdered, and for the cause of peace in our turbulent world.”

The charismatic movement, which focuses on the gifts of the Holy Spirit, is by its nature an ecumenical movement, the pope said. Christian unity is “the test of the credibility of Christians and of Christ himself,” and Christian divisions make evangelization more difficult.

While theological dialogue is important in bringing about the formal unity of divided Christians, he said, “spiritual ecumenism” — “praying and proclaiming together that Jesus is Lord and coming together to help the poor” — is something to which all Christians are called. “This must be done.”

Despite their differences, the pope said, too many Christians already are united in one kind of ecumenism, the “ecumenism of blood.”

“For our persecutors, we are not divided — we are not Lutherans, Orthodox, Evangelicals, Catholics. For persecutors we are Christians; they are not interested in anything else,” the pope said. “This is the ecumenism of blood being lived today.”

Pope Francis also told the charismatics that as people who value the rich variety of the gifts of the Holy Spirit they should not fear diversity. “Uniformity is not Christian,” he said.

Being united in Christ and in the church “does not necessarily mean doing everything together or thinking in the same way,” he said. “Unity in diversity is actually the opposite: it involves the joyful recognition and acceptance of the various gifts which the Holy Spirit gives to each one and the placing of the gifts at the service of all members of the church.”

Accepting the Holy Spirit’s diversity while allowing the Spirit to forge unity “means knowing how to listen, to accept differences and having the freedom to think differently and express oneself with complete respect toward the other, who is my brother or sister,” he said.

Departing from his prepared text, Pope Francis referred to the day’s Gospel reading from Luke 14:1-6. The Pharisees, he said, were fanatics about uniformity and following the letter of the law. They were so extreme that “the Lord had to ask them, ‘But, then, is it possible to do good on the Sabbath or is it forbidden?’ This is the danger of uniformity.”

In his homily during his morning Mass in the Domus Sanctae Marthae, the pope had said the Pharisees’ attachment to the law “distanced them from love and justice.”

The path Jesus taught is one where love and justice lead to knowledge and discernment about how best to fulfill God’s law, Pope Francis said, according to Vatican Radio.

The Pharisees, the pope said, were always looking for new followers, but they did not know how to offer people hope and life-giving love. Pharisees are “closed-minded men, men who are so attached to the laws, to the letter of the law that they were always closing the doorway to hope, love and salvation.”

NEXT: Muslim-Catholic dialogue on Iranian weapons focuses on arms policies