Olive harvest at Garden of Gethsemane unites faithful with Christ 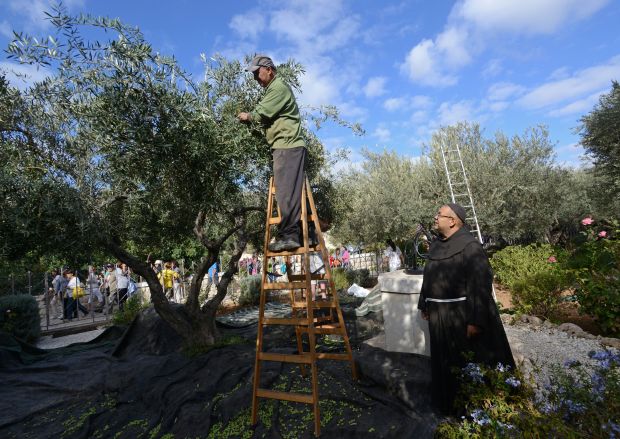 Saleem Badawi, a Greek Orthodox Palestinian form the West Bank village of Beit Jalla, picks olives in the Garden of Gethsemane in Jerusalem, Oct. 21, while Franciscan Father Benito Jose Choque. Franciscan priests and volunteers harvest the fruit each year in the garden where Jesus prayed on the night of his arrest. (CNS photo/Debbie Hill)

JERUSALEM (CNS) — For Salim Badawi, a Greek Orthodox Palestinian from the West Bank village of Beit Jalla, the opportunity to help a group of Franciscan priests harvest olives in the Garden of Gethsemane on the Mount of Olives offers a sense of hope amid the adversaries his family has faced in their own olive groves.

He said much of the olive grove of his extended family has long been unreachable as it was taken years ago to build an Israeli settlement, now considered a neighborhood of Jerusalem.

An uncle tries every year — unsuccessfully — to reach the land, Badawi said.

“Here I feel hope that maybe one day it will be different, maybe we will one day be allowed to go there and pick our olives,” Badawi told Catholic News Service while reaching into the branches of one of the trees that can be traced to the time of Christ. “The olive trees are still there, but we can’t reach them. I feel something special in this holy place where we are picking the oldest olives in the area, maybe in the whole world.”

At the bottom of the tree, Karina Henriquez, a volunteer from Chile, places olives that drop from the branches into a sack. For her, the trees that continue to bear fruit after thousands of years are a symbol of Jesus, who is still giving fruit to all who seek him.

Henriquez does not want to discuss politics, but she knows that Israelis and Palestinians are good people.

“Too bad they can’t solve their problems. We were hopeful with the pope’s visit, but then there was the war,” she said.

Still, Henriquez feels the need to share the pope’s message of speaking to the soul of people about love and peace. “We have to pray so God will place peace and love in the hearts of all people,” she said.

Since the Franciscans retook possession of the small olive grove adjacent to the Church of All Nations in 1681, the Franciscan fathers have tended to eight of what are believed to be the oldest olive trees in the Holy Land. Tradition, backed by modern genetic testing, holds that the gnarled trees were grafted at some point during the Crusader era from a single tree that was a witness to Jesus’ agony more than 2,000 years ago. 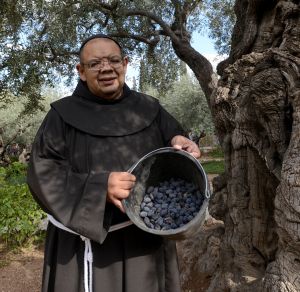 Franciscan Father Benito Jose Choque of Argentina holds a bucket of olives harvested from trees in the Garden of Gethsemane in Jerusalem Oct. 21. (CNS photo/Debbie Hill)

Today, the trees are part of the Garden of Gethsemane, fenced off and protected from the crowds of faithful who come on pilgrimage to the site. To accommodate pilgrims, the Franciscans keep a box of small branches pruned from the trees from which people can freely take a memento.

As the olive harvest begins in the Holy Land, Father Benito Choque, an Argentine who is superior of the Franciscan community at the church, ponders the significance of the olive in the Bible as he greets pilgrims outside the fence and walks among the trees inside the garden. A few pilgrims ask for an olive from the trees, but the friar gently denies their request. If he gives an olive to one, then all the other pilgrims will want one, too, he explained.

“These oldest of trees are a testament to Jesus’ suffering,” Father Choque said. The ancient trees continue to speak to those who will hear, he said.

The Franciscans have been in the Holy land for eight centuries under mandate of the Holy See, and their mission, he explained, is to live with the Jews and Muslims, transmitting their charism.

“What the Crusaders in the past did with their weapons, we do with prayers,” Father Choque told CNS. “I believe God has given something beautiful to humanity and I think the people of this land are blessed also with the planting of the olive trees.”

Though now there is confrontation not far from the trees, the priest sees the harvest as a time that unites people as families gather to pick olives and neighbors and friends meet at the olive press to make the fruit into oil used in cooking throughout the year.

Franciscan Father Diego Dalla Gassa, who guides volunteers at the garden, said he urges them to consider the vocation of the olive and the olive tree, likening them to the life of Jesus. They are cared for with the rain which God provides and in the end, they are meant to be pressed for the oil so precious and important in the region, he noted.

“It is very beautiful for us to pick the olives here from the trees we have cared for. When we collect the olives, we understand we are doing what God does with us. When we see an olive on a faraway branch, we must reach out to it to take it and so it happens with us that God is reaching out for us, searching for us,” Father Dalla Gassa said.

“This place interprets all of the life of Jesus,” he added. “Jesus was pressed here (as the olive is pressed) and we received the beautiful oil, in this case the blood (of Jesus).”

The Franciscans utilize every part of the olive, the oil is blessed and used for the Chrism Mass on Holy Thursday at the Church of the Holy Sepulcher, including the sacraments of baptism, confirmation, ordination of priests, and anointing the sick. Last year, the Franciscans sent a bottle of the blessed oil to Pope Francis for Holy Thursday in anticipation of his pilgrimage to the Holy Land.

The olive pits are sent to a few Christian Palestinian families who traditionally make them into rosaries which are then gifted to the Franciscan priests.