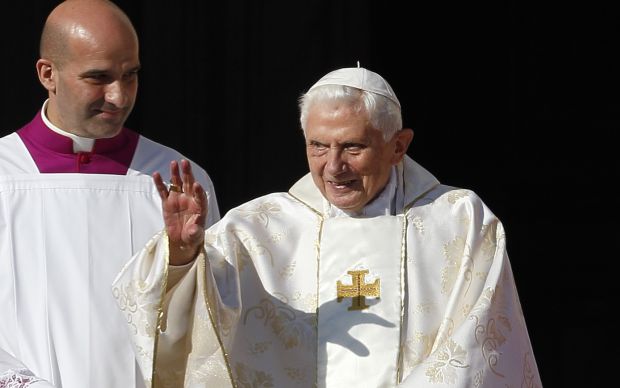 Retired Pope Benedict XVI arrives for the beatification Mass of Blessed Paul VI celebrated by Pope Francis in St. Peter's Square at the Vatican Oct. 19. The retired pope said dialogue with other religions is no substitute for spreading the Gospel to non-Christian cultures, and warned against relativistic ideas of religious truth as "lethal to faith." (CNS photo/Paul Haring)

VATICAN CITY (CNS) — Retired Pope Benedict XVI said dialogue with other religions is no substitute for spreading the Gospel to non-Christian cultures, and warned against relativistic ideas of religious truth as “lethal to faith.” He also said the true motivation for missionary work is not to increase the church’s size but to share the joy of knowing Christ.

The retired pope’s words appeared in written remarks to faculty members and students at Rome’s Pontifical Urbanian University, which belongs to the Congregation for the Evangelization of Peoples. Archbishop Georg Ganswein, prefect of the papal household and personal secretary to retired Pope Benedict, read the 1,800-word message aloud Oct. 21, at a ceremony dedicating the university’s renovated main lecture hall to the retired pope.

The speech is one of a handful of public statements, including an interview and a published letter to a journalist, that Pope Benedict has made since he retired in February 2013.

“The risen Lord instructed his apostles, and through them his disciples in all ages, to take his word to the ends of the earth and to make disciples of all people,” retired Pope Benedict wrote. “‘But does that still apply?’ many inside and outside the church ask themselves today. ‘Is mission still something for today? Would it not be more appropriate to meet in dialogue among religions and serve together the cause of world peace?’ The counter-question is: ‘Can dialogue substitute for mission?’

“In fact, many today think religions should respect each other and, in their dialogue, become a common force for peace. According to this way of thinking, it is usually taken for granted that different religions are variants of one and the same reality,” the retired pope wrote. “The question of truth, that which originally motivated Christians more than any other, is here put inside parentheses. It is assumed that the authentic truth about God is in the last analysis unreachable and that at best one can represent the ineffable with a variety of symbols. This renunciation of truth seems realistic and useful for peace among religions in the world.

“It is nevertheless lethal to faith. In fact, faith loses its binding character and its seriousness, everything is reduced to interchangeable symbols, capable of referring only distantly to the inaccessible mystery of the divine,” he wrote.

Pope Benedict wrote that some religions, particularly “tribal religions,” are “waiting for the encounter with Jesus Christ,” but that this “encounter is always reciprocal. Christ is waiting for their history, their wisdom, their vision of the things.” This encounter can also give new life to Christianity, which has grown tired in its historical heartlands, he wrote.

“We proclaim Jesus Christ not to procure as many members as possible for our community, and still less in order to gain power,” the retired pope wrote. “We speak of him because we feel the duty to transmit that joy which has been given to us.”

NEXT: Olive harvest at Garden of Gethsemane unites faithful with Christ