On sexual and medical ethics, synod fathers speak of ‘graduality’ 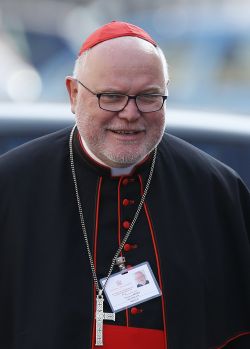 Cardinal Reinhard Marx of Munich and Freising, Germany, arrives for the morning session of the extraordinary Synod of Bishops on the family at the Vatican Oct. 7. (CNS photo/Paul Haring)

VATICAN (CNS) — In their discussions of sexual and medical ethics, participants at the Synod of Bishops on the family are giving emphasis to the concept of “graduality,” as a way of thinking about morality that allows for human imperfection without compromising ideals.

In an address to the assembly on its first working day, Oct. 6, Cardinal Peter Erdo of Esztergom-Budapest, Hungary, said that “Humanae Vitae,” the 1968 encyclical by Pope Paul VI that reaffirmed the church’s prohibition of artificial birth control, “needs to be considered in light of the law of graduality.” He suggested that it was unrealistic to expect immediate acceptance of the widely flouted teaching.

The cardinal quoted “Familiaris Consortio,” a 1981 apostolic exhortation by St. John Paul II on the role of the Christian family in the world that was inspired by the last synod on the family in 1980. According to St. John Paul, each person is a historical being who “knows, loves and accomplishes moral good in stages of growth.”

Several bishops referred to graduality in their remarks during an afternoon session dedicated to the theme of “God’s plan for marriage and the family.”

“Despite serious flaws that we always identify in Western culture, we also have to discern and to declare what the steppingstones are for Christian wisdom,” one bishop said, according to Basilian Father Thomas Rosica, an assistant to the Holy See Press Office, who did not identify the bishop in accordance with synod rules.

Discussing the church’s attitude toward “irregular” relationships, such as those of civilly married or cohabitating Catholic couples, another bishop drew an analogy with the Catholic understanding of other Christian churches. While the church is said to subsist fully only in the Catholic Church, other Christian communities are believed to possess important elements for sanctification.

By the same token, “there is a full and ideal vision of the Christian family, but there are absolutely valid and important elements even of sanctification and of true love that may be present even when one does not fully realize this ideal,” the bishop said, as paraphrased by the Vatican spokesman, Jesuit Father Federico Lombardi.

Cardinal Vincent Nichols of Westminster, who also spoke at the Oct. 6 session, told reporters the next day that the “law of graduality” is a “law of pastoral moral theology which permits people, all of us, to take one step at a time in our search for holiness in our lives.”

The cardinal, who attended the 1980 synod as a priest assisting a participating bishop, recalled that St. John Paul II had made an important point on the subject at the conclusion of the synod.

“He said, yes, there is a law of graduality, but it should not be confused with a graduality of the law,” Cardinal Nichols said. “He was saying the vision, the teaching of the church is consistent and is offered to everybody. So it’s not as if there’s one law at this time in your life and another law later in your life, but there is a pathway on which we’ll walk.”

Another synod father, Cardinal Reinhard Marx of Munich and Freising, Germany, told reporters Oct. 6 that the idea of graduality could help the church develop a new way of speaking about sexuality.

“We cannot have always 100 percent, and I would say good and bad, that’s not so easy to make the difference,” the cardinal said in English. “There is a development, a way, in the biography or in a relationship and so on.”

Cardinal Marx, chairman of the German bishops’ conference, also said that the “great majority” of German bishops support German Cardinal Walter Kasper’s controversial proposal to make it easier for divorced and civilly remarried Catholics to receive Communion, even if they have not obtained annulments of their first, sacramental marriages.

“I think it is very important to see that we have ways or that there is a graduality also in the way to the sacrament,” Cardinal Marx said.