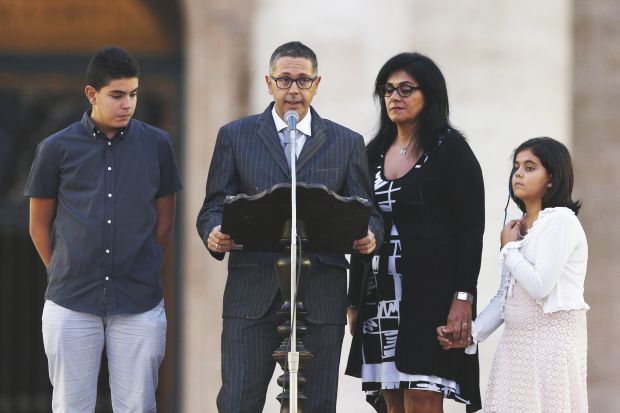 Nicola, whose last name was not given, is accompanied by his wife and children as he and his spouse present testimony about their marriage during an Oct. 4 prayer vigil for the extraordinary Synod of Bishops on the family in St. Peter's Square at the Vatican. The couple spoke candidly about difficulties in their marriage. (CNS photo/Tony Gentile, Reuters)

VATICAN CITY (CNS) — A married couple told Pope Francis and the Synod of Bishops on the family that Catholic parishes should welcome same-sex couples, following the example of parents who invite their son and his male partner to their home for Christmas.

“The church constantly faces the tension of upholding the truth while expressing compassion and mercy. Families face this tension all the time,” Ron and Mavis Pirola of Sydney told the synod Oct. 6.

“Take homosexuality as an example. Friends of ours were planning their Christmas family gathering when their gay son said he wanted to bring his partner home too. They fully believed in the church’s teachings and they knew their grandchildren would see them welcome the son and his partner into the family. Their response could be summed up in three (sic) words, ‘He is our son.'”

“What a model of evangelization for parishes as they respond to similar situations in their neighborhood,” the Pirolas said.

While Catholic teaching insists homosexual people should not be discriminated against, it holds that homosexual acts are always immoral and that marriage can only be a union between one man and one woman.

The couple, who are participating in the synod as non-voting auditors, spoke at the beginning of the afternoon session of the synod’s first working day. The session’s designated theme was “God’s plan for marriage and the family.”

The Pirolas also spoke of a divorced friend who “doesn’t feel fully accepted in her parish” yet “turns up to Mass regularly and uncomplainingly with her children. For the rest of her parish, she should be a model of courage and commitment in the face of adversity.”

The couple called for emphasizing the positive dimension of Catholic teaching on sexuality.

“Marriage is a sexual sacrament with its fullest expression in sexual intercourse. We believe that until married couples come to reverence sexual union as an essential part of their spirituality it is extremely hard to appreciate the beauty of teachings such as those of ‘Humanae Vitae,'” they said in reference to the 1968 encyclical by Pope Paul VI that reaffirmed the church’s teaching on contraception.

NEXT: On sexual and medical ethics, synod fathers speak of ‘graduality’