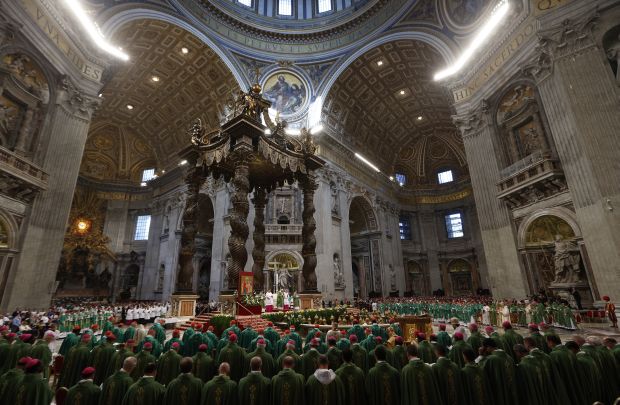 Pope Francis celebrates a Mass to open the extraordinary Synod of Bishops on the family in St. Peter's Basilica at the Vatican Oct. 5. (CNS photo/Paul Haring)

VATICAN CITY (CNS) — Opening a two-week Synod of Bishops on the family, Pope Francis warned participants against the temptations of hypocrisy, pride and greed, urging them instead to serve the church with “freedom, creativity and hard work.”

“We can thwart God’s dream if we fail to let ourselves be guided by the Holy Spirit,” the pope said Oct. 5, during Mass in St. Peter’s Basilica. “The Spirit gives us that wisdom which surpasses knowledge, and enables us to work generously with authentic freedom and humble creativity.”

Pope Francis’ homily drew on the day’s reading from the Gospel of Matthew (21: 33-43), in which Jesus describes the people of God as a vineyard, farmed by tenants who betray its owner and seek to take it over for themselves.

Addressing his words to the 184 bishops and 69 others who would take part in the synod, the pope said Jesus aimed his parable at the “chief priests and the elders of the people, in other words the experts, the managers,” whose job it was to “nurture, tend and protect” God’s people.

“But Jesus tells us that those farmers took over the vineyard. Out of greed and pride they want to do with it as they will, and so they prevent God from realizing his dream for the people he has chosen,” the pope said.

“We are all sinners, and we too can be tempted to take over the vineyard, because of that greed which is always present in us human beings. God’s dream always clashes with the hypocrisy of some of his servants,” the pope said.

The synod is slated to discuss a range of “pastoral challenges of the family” in preparation for a larger world synod in October 2015, which will make recommendations to the pope.

“Synod assemblies are not meant to discuss beautiful and clever ideas, or to see who is more intelligent. They are meant to better nurture and tend the Lord’s vineyard, to help realize his dream, his loving plan for his people,” Pope Francis said. “In this case the Lord is asking us to care for the family, which has been from the beginning an integral part of his loving plan for humanity.”

One of the most discussed topics at the 2014 synod promises to be a controversial proposal by German Cardinal Walter Kasper that would make it easier for divorced and civilly remarried Catholics to receive Communion. Pope Francis has said the predicament of such Catholics exemplifies a general need for mercy in the church today.

The pope alluded to that need for mercy when he said that “evil pastors lay intolerable burdens on the shoulders of others, which they themselves do not lift a finger to move,” a paraphrase of Jesus’ words against the hypocrisy of scribes and Pharisees in Matthew 23: 4.

Prior to celebrating Mass, Pope Francis stopped briefly in the basilica to venerate the relics of St. Therese of Lisieux and her parents, Blessed Zelie and Louis Martin, which will be in the Basilica of St. Mary Major for the duration of the synod. St. Therese’s parents, who were beatified in 2008, practiced continence for the first year of their marriage but later had nine children, five of whom lived to adulthood and became nuns.