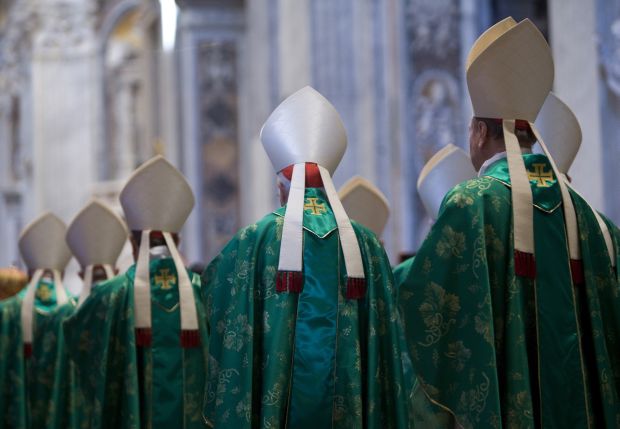 Bishops arrive in procession for a Mass celebrated by Pope Francis to open the extraordinary Synod of Bishops on the family in St. Peter's Basilica at the Vatican Oct. 5. (CNS photo/CNS photo/Maria Grazia Picciarella, pool)

VATICAN CITY (CNS) — Pope Francis opened the first working session of an extraordinary Synod of Bishops Oct. 6, urging participants to speak fearlessly and listen humbly during two weeks of discussion of the “pastoral challenges of the family.”

Hungarian Cardinal Peter Erdo of Esztergom-Budapest then outlined some of the major challenges the bishops would discuss, including such controversial topics as cohabitation, divorce, birth control and the impact of social and economic pressures.

“Let nobody say: ‘I can’t say this; they’ll think such-and-such about me,'” Pope Francis told more than 180 bishops and more than 60 other synod participants. “Everyone needs to say what one feels duty-bound in the Lord to say: without respect for human considerations, without fear. And, at the same time, one must listen with humility and welcome with an open heart what the brothers say.”

The pope recalled that, after a gathering of the world’s cardinals in February, one cardinal told him others had hesitated to speak out for fear of disagreeing with the pope.

“This is no good, this is not synodality,” the pope said.

Later in the morning, Cardinal Erdo, who as the synod’s relator has the task of guiding the discussion and synthesizing its results, gave an hour-long speech that drew on written statements submitted in advance by the synod fathers and on responses to a well-publicized questionnaire sent to the world’s bishops last November.

The Oct. 5-19 synod is not supposed to reach definitive conclusions but set the agenda for a larger world synod in October 2015, which will make recommendations to the pope.

Cardinal Erdo said the synods would seek to develop shared pastoral “guidelines to help those living in difficult situations,” so that individual bishops would not resort to the “improvisations of a do-it-yourself ministry.”

“What is being discussed at this synod of an intense pastoral nature are not doctrinal issues, but the practical ones, nevertheless inseparable from the truths of the faith,” the cardinal said.

Among the difficult family situations he identified was that of divorced and civilly remarried Catholics, whose predicament Pope Francis has said exemplifies a general need for mercy in the church today.

The cardinal made only an oblique reference to what is sure to be one the synod’s most discussed topics: a controversial proposal by German Cardinal Walter Kasper that would make it easier for such Catholics to receive Communion, even if they do not obtain annulments of their first, sacramental marriages.

“It would be misleading to concentrate only on the question of the reception of the sacraments,” Cardinal Erdo said.

He focused instead on the possibility of streamlining and simplifying the annulment process — the task of a special commission Pope Francis established in late August — and noted proposals to allow bishops to declare marriages null as an administrative action, without holding a trial before a church tribunal.

“Under the influence of the existing culture, many reserve the right not to observe conjugal fidelity, to divorce and remarry if the marriage might not be successful, or not to open themselves to life,” the cardinal said, citing attitudes that could render many marriages invalid.

While he reiterated Catholic teaching that “a second marriage recognized by the church is impossible while the first spouse is alive,” the cardinal said it would be important to study the “practice of some of the Orthodox churches, which allows for the possibility of a second or third marriage.”

Noting that Catholics increasingly choose to marry civilly or live together without marrying at all, Cardinal Erdo said the church should “draw close” to such couples in order to lead them on the “path toward celebrating the sacrament of marriage.” He said doing that would require the church to recognize the “best part of these situations which oftentimes is not understood or capable of being grasped.”

“When these relationships are obviously stable in a publicly recognized legal bond, they are characterized by deep affection, display a parental responsibility towards their offspring and an ability to withstand trials,” he said.

On the subject of birth control, the cardinal emphasized that “openness to life is an essential part, an intrinsic requirement of conjugal love,” but said that families cannot be expected to live up to that value without an increased expression of “diffused and concrete solidarity” from the wider community, including the church.

“The tendency toward the privatization of love needs to be overcome,” he said. “The Western world risks making the family a reality entrusted exclusively to the choices of the individual, totally detached from a regulatory and institutional framework.”

Cardinal Erdo highlighted social and economic pressures on the family, an area that bishops from developing countries are likely to emphasize.

“We are not dealing with only problems involving individual behavior but the structures of sin hostile to the family, in a world of inequality and social injustice, of consumerism, on the one hand, and poverty, on the other,” the cardinal said, noting in particular the weight of “increasing job insecurity” and migration.

“The concrete support of the church for these families is unable to be done without a pro-active commitment through appropriate policies by governments and public agencies,” he said.

In contrast to many of the speakers at the last such gathering — the Synod of Bishops on the new evangelization, held in October 2012 — Cardinal Erdo did not criticize the effects on secularism on traditional Christian morality. But he did mention the “disruptive” effects on the family of “various forms of dependence, such as alcohol, drugs, gambling, pornography, sexual addiction and social networks.”