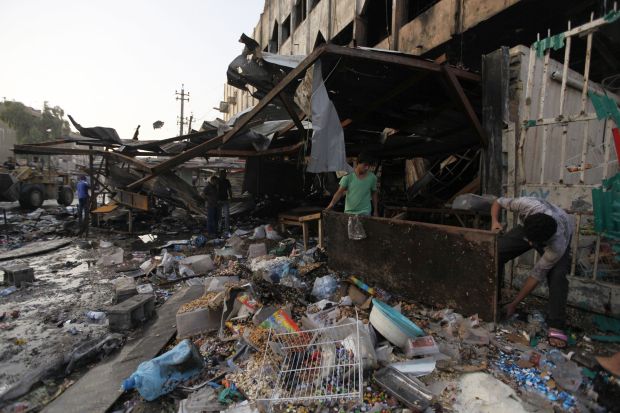 People gather at the site of an Oct. 2 car bomb attack that killed 11 people in Baghdad. Pope Francis opened a three-day summit Oct. 2 on the violence and persecution underway in the Middle East, saying arms trafficking was the root cause of many problems in the region. (CNS photo/Ahmed Saad, Reuters)

VATICAN CITY (CNS) — Pope Francis opened a three-day summit on the violence and persecution underway in the Middle East, saying arms trafficking was the root cause of many problems in the region.

The pope convened the Vatican summit Oct. 2-4 because of his growing concern and desire to do something about “the dramatic situation” Christians and other religious and ethnic minorities are facing in the Middle East, Jesuit Father Federico Lombardi said Oct. 2.

Those called to the summit included the seven Vatican nuncios based in Syria, Jordan-Iraq, Egypt, Israel-Palestinian territories, Iran, Lebanon and Turkey, as well as top Vatican officials from the Secretariat of State, the Vatican’s permanent representatives at the United Nations in New York and Geneva, as well as from Vatican offices dealing with issues concerning refugees, charitable aid and Eastern churches.

The pope opened the proceedings and spent about 30 minutes with the 24 summit participants.

Father Lombardi, the Vatican spokesman, said the pope spoke about his worries connected with the wars in the region and his concern for those suffering because of the widespread violence.

The pope mentioned the problem of terrorism, “in which a person’s life has no worth. He underlined the problem of the trafficking of arms that is at the root of many problems, as well as the humanitarian tragedy lived by the many people who are forced to leave their country,” the Jesuit priest said in a written statement.

Pope Francis encouraged continued prayers and the need to pinpoint concrete programs and action at many “more levels” that would show the church’s solidarity and involve the international community as well as people of good will in helping the countless people in need, he said.

The start of the summit came the same day Pope Francis met with the patriarch of the Assyrian Church of the East.

“No religious, political or economic reasons can justify what is happening to hundreds of thousands of innocent men, women and children,” the pope told Catholicos Dinkha IV, the patriarch of a church whose oldest communities are in Iraq, Iran, Syria and Lebanon.

“How many of our brothers and sisters are suffering a daily persecution,” as can be seen with “the violence striking Christians and the faithful of other religious minorities, especially in Iraq and Syria,” he told the patriarch.

In their suffering, one can see “the body of Christ that, still today, is wounded, stricken and humiliated,” he said.

While theological discussions continue and much ecumenical progress has been made, the Assyrian Church of the East is not in communion with Rome.

Pope Francis pledged the Catholic Church’s continued commitment to dialogue and cooperation, and said, “We feel deeply united in prayer” and in charitable aid and action being taken to help alleviate the suffering of all Christians.

NEXT: Pope: People must open hearts to migrants who face closed borders