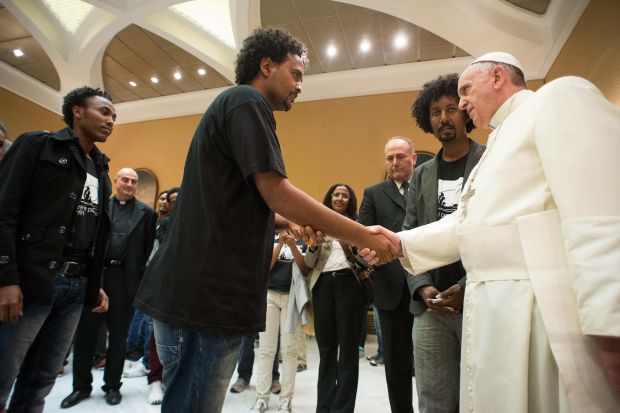 Pope Francis holds an Oct. 1 private audience at the Vatican with a group of survivors of the Oct. 3, 2013, shipwreck off the Italian island of Lampedusa. (CNS photo/L'Osservatore Romano via Reuters)

VATICAN CITY (CNS) — People need to open their hearts to the many people who are forced to migrate as they face enormous difficulties and sometimes tragedy, Pope Francis said.

“I pray for closed hearts that they may open. And everything I have available to me, is available to you,” he told a group of young Eritreans who survived a deadly shipwreck off the coast of the Italian island of Lampedusa.

The pope met with 20 survivors and their family members at the Vatican Oct. 1, just a few days shy of the anniversary of the Oct. 3, 2013, disaster.

More than 360 people were killed after a boat, reportedly carrying more than 500 migrants from northern Africa, capsized and sank near Lampedusa, Italy’s southernmost island. Some 155 people survived.

Pope Francis sent a representative to the island a few days after the disaster to distribute aid and convey the pope’s prayers and concerns. The pope had visited the island in early July after seeing newspaper headlines in June describing the drowning of immigrants at sea.

At the Oct. 1 gathering in a Vatican meeting hall, one of the survivors told the pope that many are still traumatized and many families don’t know where their dead loved ones have been buried after their bodies were recovered.

“We don’t know where to go to cry for them, under what number” they’ve been listed as one of the many unidentified dead, said an unnamed relative of one of the victims.

“We would like you to go back again to raise up your voice, so that no one is forced to flee their own country ever again, their home, their loved ones, so that no one is forced to risk their lives” to escape violence and poverty and search abroad for a normal life, said the relative, according to a written statement released by “October 3 Committee,” the group that organized the survivors’ visit to the pope.

Pope Francis said he was speechless.

“I don’t know what to say. I cannot express what I feel, because words are not enough to describe what you have suffered. This can only be contemplated in silence, with tears, and by trying to find a way to be close to you,” he said, according to Vatican Radio.

He recognized the hardships they face as migrants, not only with the sometimes dangerous journeys of escape, but with the “even harsher realities” when they arrive as “very often the doors are closed, and you do not know where to go.”

“It’s most important that the doors to hearts are open in times like these,” he said, urging Europeans to open their hearts to those in need.

The survivors gave the pope a wrought iron sculpture shaped like a bottle with a mother, father and child inside the bottle facing the opening.

The sculpture matches the organizing committee’s logo of a family in a bottle floating in the ocean, with the message, “Protect the People, Not the Borders.”

Marking the anniversary, Jesuit Refugee Service also called on the European Union to establish a system of humanitarian visas, assist with family reunification and increase its annual refugee resettlement quota.

The Jesuits noted that after the October 2013 disaster, the Italian government launched Operational Mare Nostrum, rescuing migrants at risk of drowning in international waters. JRS said the Italians — shouldering a burden that should be shared by the European Union — rescued nearly 142,000 people in the past year, demonstrating “how much can be done when states prioritize life above border security.”

NEXT: Communion for some Catholics should be ‘off the table’ at synod, cardinal says