Synod of Bishops sends message of encouragement to traditional families 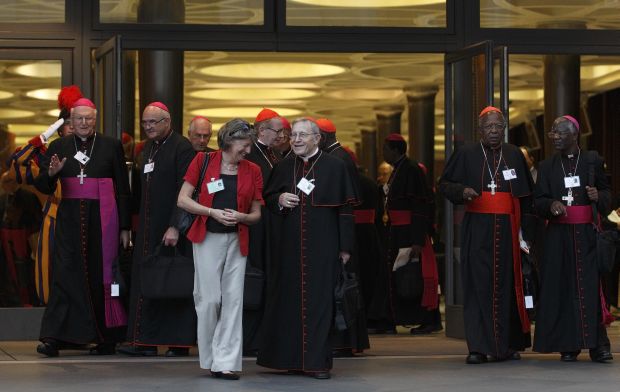 German Cardinal Walter Kasper, retired president of the Pontifical Council for Promoting Christian Unity, talks with Vatican Radio's Philippa Hitchen as he leaves the concluding session of the extraordinary Synod of Bishops on the family at the Vatican Oct. 18. At right is Cardinal John Njue of Nairobi, Kenya. (CNS photo/Paul Haring)

VATICAN CITY (CNS) — On its last day of business, the Synod of Bishops on the family approved and released a three-page message expressing solidarity with Christian families around the world.

The message, released Oct. 18, is distinct from the synod’s final report, which the assembly was scheduled to vote on later the same day.

Following two weeks of often-contentious discussion that included sensitive questions of sexual and medical ethics and how to reach out to people with ways of life contrary to Catholic teaching, the synod’s message, which was approved by a large majority of the assembly, focused on the challenges and virtues of traditional families.

“We recognize the great challenge to remain faithful in conjugal love,” the bishops said, citing obstacles including “enfeebled faith,” “individualism,” “stress that excludes reflection” and a lack of “courage to have patience and reflect, to make sacrifices and to forgive one another.”

The message praised parents caring for disabled children, families suffering economic hardship and the trials of migration, and women victims of human trafficking.

“Christ wanted his church to be a house with doors always open to welcome everyone,” the bishops said.

The document noted the reality of spouses in failed marriages who enter into second unions, “creating family situations which are complex and problematic, where the Christian choice is not obvious.”

The synod fathers said that they had reflected on one of the assembly’s most controversial topics — the question of whether to make it easier for divorced and civilly remarried Catholics to receive Communion — but gave no suggestion that they had arrived at any conclusions.

Cardinal Gianfranco Ravasi, who led the panel that drafted the message, was asked at a news conference why the document included no reference to homosexuals, following remarkably conciliatory passages on “welcoming homosexuals” in the synod’s Oct. 13 midterm report.

“With this message we address Christian families, so the matrimonial model is the traditional one, with all its problems,” the cardinal said, adding that the synod’s final report would treat a wider range of subjects, including homosexuality.

The message ended on a positive note, celebrating the prayerful Christian family as a “small, daily oasis of the spirit” and sacramental “conjugal love, which is unique and indissoluble (and) endures despite many difficulties.”

NEXT: Archbishop Kurtz urges more transparency at next family synod