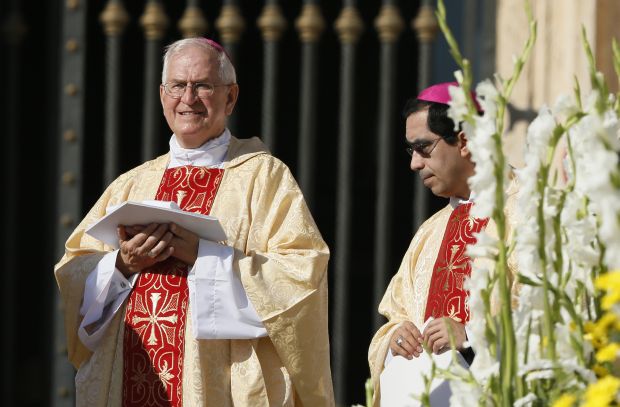 Archbishop Joseph E. Kurtz of Louisville, Ky., president of the U.S. Conference of Catholic Bishops, arrives in procession for the beatification Mass of Blessed Paul VI celebrated by Pope Francis in St. Peter's Square at the Vatican Oct. 19. The Mass also concluded the extraordinary Synod of Bishops on the family. (CNS photo/Paul Haring)

VATICAN CITY (CNS) — Archbishop Joseph E. Kurtz of Louisville, Kentucky, said the October 2015 world Synod of Bishops on the family should return to the practice of previous synods in publishing participants’ interventions, for the benefit of their discussions and the information of the outside world.

The archbishop, president of the U.S. Conference of Catholic Bishops, spoke with Catholic News Service Oct. 19, the last day of the extraordinary synod on the family Pope Francis called to prepare an agenda for next year’s assembly.

This year’s synod departed from established procedure by requiring participants to submit written interventions in advance. The texts were not distributed, not even to synod fathers, whose brief remarks in the hall were not reported to the press, another departure from previous practice.

“There was the sense, I guess, that (publishing the interventions) would inhibit people from speaking out, but I don’t think that’s the case,” Archbishop Kurtz said. “My fond hope, and really my urging, if people ask me about this, would be to say, no, return to that process so that that’s another level of transparency.”

The archbishop said the synod’s final document, approved by the assembly Oct. 18, represented an improvement on its Oct. 13 midterm report, which stirred controversy with strikingly conciliatory language toward people with ways of life contrary to church teaching, including divorced and civilly remarried Catholics, cohabitating couples and those in same-sex unions.

“The initial document left people with many questions,” he said. “We didn’t want to leave the synod with that lack of clarity.”

Meeting in small working groups to discuss the text, a majority of synod fathers said it lacked references to relevant church doctrine and gave insufficient attention to families whose lives exemplify that teaching.

Archbishop Kurtz said his own efforts were aimed at producing a final report “grounded in sacred Scripture and in the tradition of the church in which the teachings of Jesus, of course, are preserved.”

The archbishop acknowledged the synod had failed to reach consensus on whether to make it easier for divorced and civilly remarried Catholics to receive Communion. But he said the assembly did agree to reach out to people in that “painful situation” by “looking at the way annulments are done and how accessible annulments can be, without violating, of course, the bond of marriage.”

Regarding the only other section of the final report that failed to win a two-thirds majority of votes, a paragraph on “pastoral attention to persons with homosexual orientation,” Archbishop Kurtz the “big message that I take home is obviously there is a place for everyone in the church.”

“People of same-sex attraction are welcome in the church; we all together seek to live chaste and good lives and to help each other in that process,” the archbishop said.

Looking ahead to the 2015 synod, whose theme will be the “vocation and mission of the family in the church and the modern world,” Archbishop Kurtz said he expected individual bishops to consult with their flocks as they did in preparation for this year’s assembly, “and maybe even in a more refined way.”

“I think the key will be not simply for us to share what’s on the top of our minds but rather (be) informed by” the Oct. 18 final report, the archbishop said.