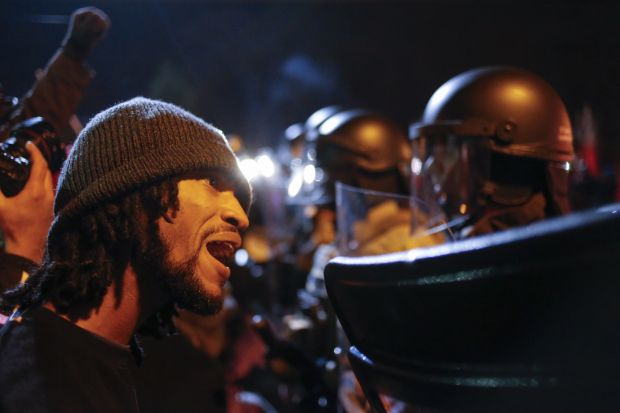 A protester confronts a police officer in Ferguson, Mo., Nov. 24 after a grand jury returned no indictment in the Aug. 9 shooting death of Michael Brown in the St. Louis suburb. (CNS photo/Adrees Latif, Reuters)

WASHINGTON (CNS) — The scenes of chaos and violence in Ferguson, Missouri, Nov. 24 following the grand jury’s decision not to indict the white police officer in the shooting death of Michael Brown, an African-American teenager, reveal deeper issues going on in the country, said one of the country’s black Catholic bishops.

“The racial divide that exists between blacks and whites is not addressed adequately except when tragedies such as this happen,” said retired Bishop John H. Ricard of Pensacola-Tallahassee, Florida, who is president of the National Black Catholic Congress.

The smashed windows, lootings, car and building fires when the grand jury’s decision was announced were “part of a cycle of violence that is going to continue spiraling,” he added.

The reactions also went against the Brown family’s wishes to keep “protests peaceful.”

In a statement, the family urged the public to channel their “frustration in ways that will make a positive change. We need to work together to fix the system that allowed this to happen.”

When asked what can be done to work toward this “positive change,” particularly by the Catholic community, the bishop said Catholics should return to the passion many of them showed during the civil rights movement.

“We need to rekindle that commitment and not be so silent and only react when there is a great tragedy that forces us to,” he said Nov. 25 from St. Joseph’s Seminary in Washington where he is rector for the Josephites, the order founded to serve newly freed slaves in the United States and now ministers in African-American communities.

The bishop noted that many church leaders were at the forefront in integrating schools and fighting against racial discrimination in the 1950s and ’60s.

“The church took an active role” back then, he noted and added that church leaders in St. Louis have made efforts but overall the church as a whole has not been as “visibly active.”

Bishop Ricard, who grew up in the segregated South in Baton Rouge, Louisiana, and was a seminarian in Washington when the Civil Rights Act passed, does not have a simple reason for why the church has not been as outspoken in recent years but he thinks complacency is partly to blame.

“People throw up their hands in air when there aren’t clear solutions or they are distracted by other things going on,” he told Catholic News Service.

What he would like to see happen in the wake of the Ferguson decision and reaction is for parishes or dioceses to convene to discuss racism.

“We have structures in place,” he said, noting that it also takes courage and the “will and leadership to determine we’re going to take this step.”

Because as he sees it, these types of violent situations and reactions will continue “and if anything, get worse” if nothing is done.

He described the situation in Ferguson as a “very tragic event to see two lives, two families damaged.”

He also said it “raises questions on both sides on the use of violence and police reaction,” adding that in this country there seems to be a “consistent pattern of excessive force used against African-American men.”

In an interview with CNS this summer, he said that “racism is still a part of the fabric of our environment — of the air we breathe. It’s still part of the DNA of most Americans.”

He said it is so embedded in society that “no one group is going to solve it” and it will take “a lot of courage, forethought, imagination to address this well.”

NEXT: Release of Guantanamo detainees appears to be on upswing