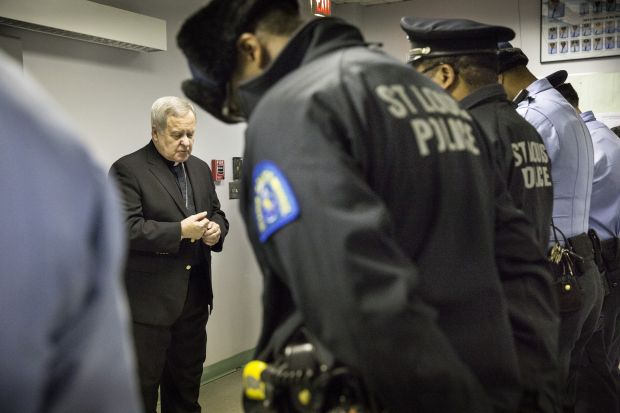 ST. LOUIS (CNS) — St. Frances Cabrini Academy students are from all economic levels, ethnic backgrounds and faith traditions. Because of support from throughout the community, the school in south St. Louis is able to enroll students whose families need help to meet tuition costs.

Archbishop Robert J. Carlson, in a letter to business leaders in 2010, explained that the Archdiocese of St. Louis has long been morally and financially committed to urban education — at a number of elementary and high schools.

“We are motivated by strong religious values, of course. But we also know that an investment in urban children — regardless of race, creed, social or economic status — will provide a substantial return in the quality of life, economic productivity and human values that make St. Louis a world-class community,” the archbishop wrote.

Archbishop Carlson’s commitment has only grown since then. Much of it is made possible through the Today and Tomorrow Foundation’s donors and contributions to the Annual Catholic Appeal. Through the foundation, scholarships of $2.3 million were given to 946 students last year. The current school year is the third of the Mission Advancement Initiative, whereby more than $2.8 million was awarded to 1,853 families with children in 102 Catholic schools.

The commitment to urban education is just one area where the Archdiocese of St. Louis and Catholic-related programs in St. Louis have addressed justice and race issues.

Other examples include the Queen of Peace Center, a Catholic Charities agency that has several programs working with youth in the Ferguson area; the Incarnate Word Foundation, a ministry of the Sisters of Charity of the Incarnate Word, which works as a partner to fund and assist projects improving the lives of poor and marginalized people; and a beekeeping business that provides youth with job-training skills and receives a grant from the U.S. bishops’ Catholic Campaign for Human Development, or CCHD.

Archbishop Carlson, in summarizing one of the points made by the U.S. bishops on the Catholic Church’s social teaching, stated that “solidarity requires that we pursue justice, eliminate racism, end human trafficking, protect human rights, seek peace.”

Father Richard C. Creason, pastor of Most Holy Trinity Parish in north St. Louis, cited the importance of faith-based organizing, which the archdiocese has supported. “It builds relationships and works on the systemic side.”

He urged efforts to bring corporations, labor unions and community groups together and for labor unions to bring skilled jobs with solid employment to the urban area.

Kathy McGinnis of the Institute for Peace and Justice in St. Louis said that poverty and racism are intermingled, and a lack of employment and underemployment leads to a loss of hope in achieving a better life. Projects funded by CCHD address such issues as does advocating public policies that work against poverty, she said.

Issues of racial justice often involve the criminal justice system, McGinnis added. “It is one of the dividing lines between people of color and white people. For those of us who are white, we really have to understand that system better. Parish sessions can help people understand it. … the drug war, quality policing initiatives … and all that.”

The number of young, unarmed African-American males killed in police officer-involved shootings shows something is wrong, McGinnis said. “There has to be more contact between people of color and white people. That means people have to take initiative. Parishes have to be willing to do some work together. Not (just) coming in to help people, but interaction.”

Programs at the parish level that address racism will help, she said.

When people begin to see the big picture — including meeting an array of other needs such as employment and transportation — solutions will come, McGinnis added.