As a suicide alternative, palliative care affirms life at its end 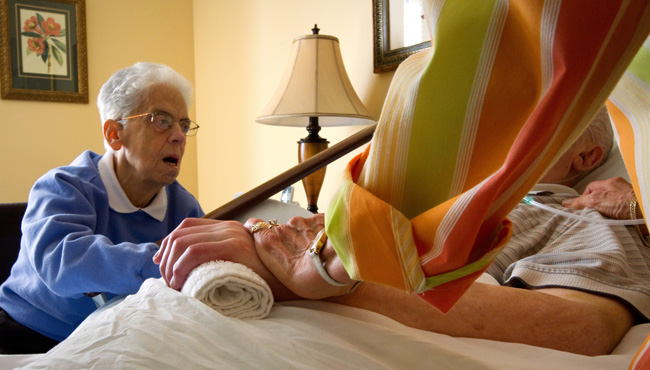 In this Sept. 7, 2012, file photo, family members watch over Leo King at his bedside at the Center for Compassionate Care in Pittsburgh. King, an 84-year-old urologist and veteran of World War II, died the following day with family at his side. Pictured is his sister Patricia King, left, and his wife, Jacqualin, right. (CNS photo/Nancy Phelan Wiechec) 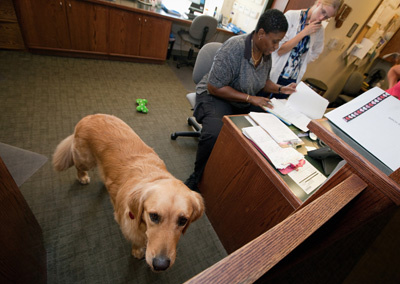 In this Sept. 6, 2012, file photo, full-time service dog Ivan takes a break at the nurses’ station in the Center for Compassionate Care in the Mount Lebanon area of Pittsburgh. The dog sees to both patients and staff in the palliative care unit. (CNS photo/Nancy Phelan Wiechec)

Palliative care is “the comprehensive management of symptoms and attention to the whole-person needs of a patient with chronic illness especially in its terminal stages,” according to Dr. Daniel Sulmasy, professor of medical ethics in the medical and divinity schools at the University of Chicago.

He said it includes pain control, treatment of depression and nausea, fatigue and weakness, among other symptoms, and he noted that most teams also include chaplains to provide spiritual care.

M.C. Sullivan, ethics director of Covenant Health Systems with offices in Tewksbury, Massachusetts, who chairs the board of the Oregon-based Supportive Care Coalition, said too many people don’t know about palliative care, and that there’s not “good permeation” even in health care organizations. Many have only heard about palliation in the context of end-of-life care, she said, and therefore either fear it or disapprove of it.

With new pain medications and technologies, Sullivan said, pain can be controlled or eliminated.

But she said sometimes there has to be a trade-off, and some patients will choose to live with some pain to remain alert and able to interact with loved ones or will be troubled by some side effects of pain medication, such as nausea. Nevertheless, available pain control measures “can reduce even the most severe pain.”

With new pain medications and technologies, pain can be controlled or eliminated.

Palliative care helps the patient have control. Individuals respond differently and make different choices. Not all hospitals have palliative care teams or palliative care specialists — a 2011 Pew study showed only 30 percent of hospitals offer such care. But the goal, Sullivan said, is to have informed patient consumers who expect and demand good palliative care: “Then they will get it.”

People need to know most hospitals are now being required to offer palliative care and “they need to feel empowered and to ask (about it) at a time earlier on — as soon as they’re diagnosed with serious or chronic illness.” There should be, she told Catholic News Service, a “robust” ongoing conversation between patient and caregivers about the patient’s current conditions and goals.

Palliative care and treatment of disease, including such measures as chemotherapy for cancer, can be used together as appropriate.

Sulmasy also pointed out that the Catholic Church has been teaching for some 500 years that the patient need not accept extraordinary means such as artificial life support when they are burdensome or useless. 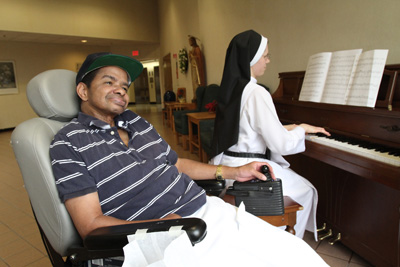 In this April 19, 2011, file photo, patient Warren Saunders smiles as Dominican Sister Agnes Mary plays the piano at Rosary Hill Home in Hawthorne, N.Y. Rosary Hill is the motherhouse of the Dominican Sisters of Hawthorne, who staff a nursing home at there that provides palliative care to people with incurable cancer and are in financial need. (CNS photo/Gregory A. Shemitz)

Unfortunately, he said, there are “pockets of physicians” who believe in the use of such measures until the very end of a patient’s life, and some families who will insist on them when patients cannot express their own preferences.

He said that the things people fear most when they are asking for assisted suicide are being a burden on others or not being in control. They also fear being in intractable pain and being abandoned and alone. Palliative care is “the kind of treatment we can give for the kinds of symptoms people fear.”

Dr. Michael Brescia is executive medical director of Calvary Hospital in the Bronx, New York, a hospital devoted exclusively to the care of patients in the end stages of cancer.

He said that he has never had a patient who has spent 24 hours at Calvary ask for assisted suicide. “We’re not afraid to use powerful drugs to relieve the pain; pain is not an issue.”

Calvary’s philosophy does not include using extraordinary measures to prolong death, he said. Speaking of physician-assisted suicide, Brescia said “the answer is not to kill (patients) and not to help to kill them,” but to treat the suffering.

Maynard’s death didn’t need to be the way it was, he said; had she come to a place like Calvary, “she would have been a gift to us.”

Dr. William Toffler of Portland, Oregon, national director of the Physicians for Compassionate Care Education Foundation, spoke of the euphemisms with which advocates of assisted suicide cloak their agenda. Such terms as “death with dignity” or “compassion in dying” are loaded, he said. “What does this say to the disabled? That they have no dignity?”

Dignity, he said, is inherent in being a human person, and all “have to have the courage” to face the challenges that come with growing older.

His wife of 40 years, he said, died a few months ago after spending her last five years with cancer.

“I get sad every day,” Toffler said, but grieving is a part of the human condition. She needed his help at the end of her life, but that didn’t mean she died without dignity. During those five years of her illness, he said, “we celebrated her life.”

“The idea of killing one another is anathema to our human condition and certainly to our Catholic tradition,” he said. When it comes to treatments at the end of life, “we believe in choice” and do not require the use of treatments that may not be helpful or may even be harmful, “but there’s a bright line” between declining those treatments and actively hastening death, he said. The latter “is not care, it’s killing.”

Adequate pain control, Toffler said, tends not to shorten but to extend life. For example, he said morphine is God’s gift to the dying and with appropriate dosing “is a tremendously safe drug, incredibly useful and incredibly safe,” and can help a patient “to live life well without artificially hastening death.” But that means, he said, titrating dosages carefully — perhaps increasing a dose, when needed, by 50 percent, not by 500 percent.

Palliative care, he said, is the perfect answer to advocates of physician assisted suicide. “We have the technology today to completely eliminate suffering,” he said, while the promoters of assisted suicide “believe that the solution to suffering is to kill the sufferers.”

In Oregon, one of the three states where voters approved making physician-assisted suicide legal, he said some patients have become distrustful of doctors. “It’s not part of my profession to coach people in how to kill themselves,” but there are doctors who do that. He said he has had patients ask him, “Is that doctor one of those death doctors?” The mentality among some doctors has become “if it’s a difficult problem you just help the person kill himself or herself.”

“Death can be beautiful, but it’s never pretty,” Sulmasy said.

Nevertheless, the medical and nursing professions can promise effective treatments, and the dying need to know “that they really have something to teach us,” something that should be cherished and valued by the rest of us, he said.

Patients too often don’t see the opportunities for growth offered to them and the ability to live a full human life even in their final days, he added.