Jesus invites all to take risk ‘of being more,’ says new Chicago archbishop 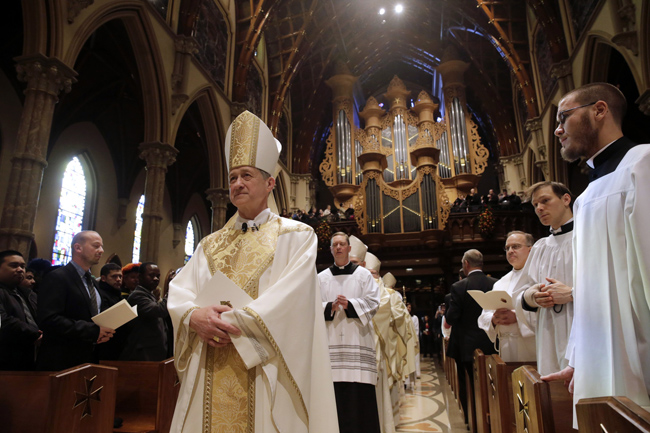 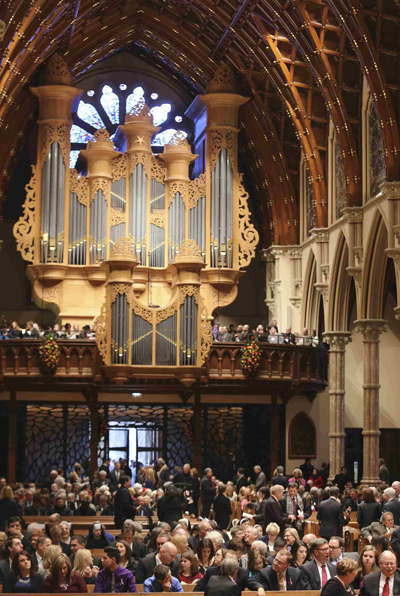 CHICAGO (CNS) — At his installation as the ninth archbishop of Chicago Nov. 18, Archbishop Blase J. Cupich urged the congregation at Chicago’s Holy Name Cathedral to fearlessly share their faith recognizing that God calls them “to more” and “to greater things.”

Before an overflow crowd, the archbishop said he had “a bit of a panic attack” when he saw the day’s Gospel reading was about Jesus walking on water and calling his disciples to follow him.

“I realize this new responsibility is going to be demanding,” he said in his homily, “but seriously folks, I don’t do ‘walking on water.’ I can barely swim. So I hope this image in today’s Gospel is not reflective of anyone’s expectations.”

During the Mass at Holy Name Cathedral, the Archdiocese of Chicago welcomed its ninth archbishop with several outpourings of applause and gratitude for Archbishop Cupich and his predecessor, Cardinal Francis E. George.

Then Archbishop Vigano and Cardinal George escorted Archbishop Cupich to the cathedra, the bishop’s chair, and he was presented with a crozier used by Cardinal George Mundelein. A standing ovation from the congregation led directly into the “Gloria.”

It was the first time since becoming an archdiocese in 1880 that a Chicago archbishop lived to see the transfer of authority to a new ordinary.

During his homily, the archbishop explained that all four of his grandparents were immigrants from Croatia, and the date was meant to recognize immigrants. It’s also the feast of St. Rose Philippine Duchesne, who ministered to native people, so the date recognizes both Native Americans and the contributions of religious sisters, he said.

It was the first time since becoming an archdiocese in 1880 that a Chicago archbishop lived to see the transfer of authority to a new ordinary.

Talking about the day’s readings, he followed up his remark about “Jesus walking on water” and his quip about how he himself “can barely swim,” he went on to say that among lessons the Gospel story is meant to teach is that the experience of sharing life with God should prompt us to seek others to share that life with them, just as Jesus sought his disciples in the boat, even if it “seems so daunting, as daunting as walking on water.”

To do that authentically, Christians must reach back to their own baptismal calling, he said. That’s what bishops must do as they continue to work in the aftermath of the sexual abuse crisis.

“Working together to protect children to bring healing to victim survivors and to rebuild the trust that has been shattered in our communities by our mishandling is our sacred duty, as is holding each other accountable, for that is what we pledge to do,” he said.

Jesus does more than seek out his apostles in that Gospel passage, Archbishop Cupich said. He also invites Peter to join him on the water. “Jesus invites us, not only to take the risk of leaving our comfort zone, but also to deal with the tension involved in change … and to challenge each other to do so,” he said.

Then Jesus got into the boat, despite all the fear, doubt and jealousy that was ruling the relationships among the apostles, he said, and that demonstrates how Jesus accompanies his people.

“His coming to us, his communion with us is not for the perfect, but is for the salvation of souls, for the lost, the forlorn and those who are adrift,” the archbishop said. “That is why now, in our day, Peter, in his successor, Pope Francis, urges us to take up the task of crossing the seas to seek out, to invite and accompany others, because the risen Christ is in the boat with us,” he concluded.

Archbishop Cupich’s homily was heard by a congregation that included seven cardinals and about 95 archbishops and bishops as well as hundreds of priests. It also was broadcast live on all Chicago news stations, the Eternal Word Television Network and Relevant Radio.

All eight of the archbishop’s siblings attended the installation. They, and their children and grandchildren, made for a family group of about 55 people, most of whom came to Chicago Nov. 17 and got to spend some time sightseeing before that evening’s rite of reception for the new archbishop at the cathedral.

One evening, the family had dinner at the cardinal’s residence cooked by the Polish women religious who take care of the residence, according to Margaret Altman, Archbishop Cupich’s sister.

“It was a lovely Polish meal,” she told the Catholic New World, Chicago’s archdiocesan newspaper.

They also took time for Chicago-style pizza and shopping, and the men in the family saw the Chicago Bears beat the Minnesota Vikings at Soldier Field Nov. 16.

Many family members had attended Archbishop Cupich’s ordination as a bishop in Rapid City, South Dakota, in 1998, and his installation as bishop of Spokane, Washington, in 2010, but the scale of the events in Chicago was quite a bit bigger, said Kathy Schulte, Archbishop Cupich’s sister.

While his relatives said the experience was more intense because so many people, and so many media outlets, are interested, they have confidence that new archbishop can navigate the waters.

Margaret Altman handled getting dozens of Cupich relations together and on the same page for what turned out to be something of a family reunion, bringing in members from California and Kansas as well as Nebraska, among other places. She brought a bag or red-and-white ribbons to the installation Mass to identify family members.

Among those who attended from the Diocese of Rapid City was Margaret Simonson, the chancellor, who said Chicago is fortunate to have Archbishop Cupich.

“I think he was made for this place,” she said. “I think he’s going to do a great job for you.”

One of the first people in the entrance procession for the Mass was Roland Nightingale, a Knight of Peter Claver. After the Mass, he said he enjoyed the opportunity to hear the new archbishop on the day he took his seat in Holy Name Cathedral.

“It was nice,” he said. “I’m sure he’ll be a blessing and take us in the direction that we need to go as a Catholic family.”

NEXT: As a suicide alternative, palliative care affirms life at its end