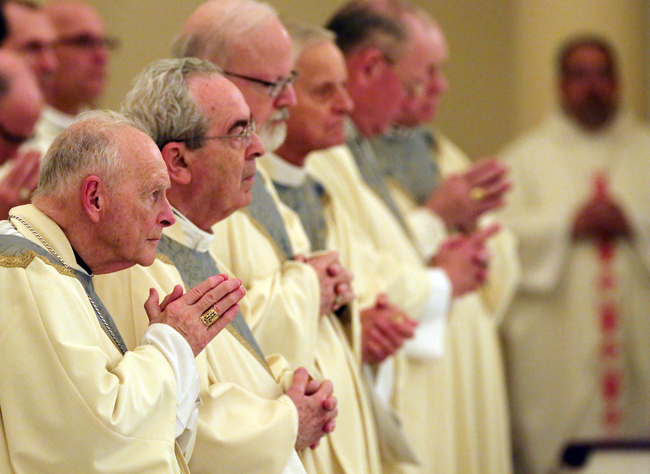 Cardinal Theodore E. McCarrick, retired archbishop of Washington, and Cardinal Justin Rigali, retired archbishop of Philadelphia, pray during Mass Nov. 10 at the Basilica of the National Shrine of the Assumption of the Blessed Virgin Mary in Baltimore. The Mass was celebrated during the annual fall general assembly of the U.S. Conference of Catholic Bishops. (CNS photo/Bob Roller) 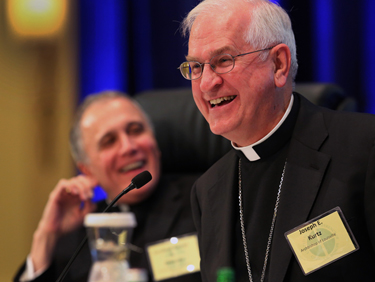 BALTIMORE (CNS) — Though there were no actions on the U.S. bishops’ agenda in Baltimore dealing with immigration, poverty and other public policy issues, the president of their conference said Nov. 11 that he hopes to meet with President Barack Obama and House and Senate leaders soon on several topics.

In a brief comment during the annual fall general assembly of the U.S. Conference of Catholic Bishops, Archbishop Joseph E. Kurtz of Louisville, Kentucky, said he had heard from many of his brother bishops about those issues and hopes to supplement the work that committees and USCCB staff are doing on such issues by conferring with the politicians.

He told Catholic News Service that he intends to pursue a meeting with the president and the congressional leaders as soon as December.

In other action on the second public day of the Nov. 10-13 meeting, the bishops:

— Voted in favor of a request by the USCCB’s doctrine committee to proceed with a revision of a section of the Ethical and Religious Directives for Catholic Health Care Services dealing with partnerships.

— Endorsed the sainthood cause of Father Paul Wattson, co-founder of the Society of the Atonement in 1899 and in his day a leading advocate of Christian unity.

— Approved a 2015 budget of just under $189.5 million. They also voted on a 3 percent increase in the diocesan assessment for 2016, but the vote fell short of the required two-thirds majority of the 197 members eligible to assessment increase in the assessment. Eligible members absent from the Baltimore meeting will be canvassed to determine the final vote.

Bishop Michael F. Burbidge of Raleigh, North Carolina, chairman of the Committee on Clergy, Consecrated Life and Vocations, gave a presentation on the newly revised “Guidelines for Receiving Pastoral Ministers in the United States.”

Archbishop J. Peter Sartain of Seattle, USCCB secretary and chairman of the Committee on Priorities and Plans, told the bishops that a myriad of activities revolving around four key goals of the U.S. Conference of Catholic Bishops is an indication that “the conference planning process is working quite well.”

The USCCB’s four goals, or priorities, are faith formation and sacramental practice; strengthening marriage and family life; the life and dignity of the human person; and religious liberty.

The bishops also heard a report on the work of members of a number of bishops’ committees — from pro-life, domestic justice and international justice to evangelization and religious liberty — who together are trying to pinpoint what Catholics in the pew are thinking and why they accept or disregard church teaching.

The vast compilation of data is being assembled for bishops to read and also will be relayed in series of workshops. One of the major findings from the study — that Catholics want to find out more about their faith — has prompted plans for a 2017 convocation in Orlando, Florida, the week of July 4.

With regard to the bishops’ ethical directives for Catholic health care, the focus of the revision is part 6 and the topic concerns “Forming New Partnerships with Health Care Organizations.” It will take into account principles suggested by the Vatican Congregation for the Doctrine of the Faith.

During a question-and-answer period, bishops who spoke on the issue said they support the revision and noted the many complications that can arise in today’s health care collaborations. Once completed, the revision will be presented to the bishops for final approval.

Bishop Richard J. Malone of Buffalo, New York, chairman of the Committee on Laity, Marriage, Family Life and Youth, invited the U.S. bishops to a 2015 Lay Ecclesial Ministry Summit. It will take place June 7, 2015, to mark the 10th anniversary of the bishops’ statement “Co-Workers in the Vineyard of the Lord.” It will be held just prior to the USCCB spring general assembly in St. Louis.

In his Nov. 10 report to the bishops, Archbishop William E. Lori of Baltimore, chairman of the Ad Hoc Committee for Religious Liberty, told the bishops the committee — extended for another three years — planned to focus more on teaching and expanding networks with Catholic lay groups and interfaith and ecumenical partners. He said threats to religious liberty remain a great concern.

“The challenges to religious liberty with regard to the redefinition of marriage grow daily,” said Archbishop Salvatore J. Cordileone of San Francisco, chairman of the Subcommittee for the Promotion and Defense of Marriage, in his report.

Baltimore Archbishop William E. Lori said in his homily that all Catholics are heirs “to this precious legacy” set forth by the first nation’s first Catholic bishop — Bishop John Carroll.

“Let us humbly ask for the grace to build on the foundations that John Carroll set down,” Archbishop Lori said.

NEXT: CRS official sees wins in Ebola fight, but there’s ‘a lot more to do’