CRS official sees wins in Ebola fight, but there’s ‘a lot more to do’ 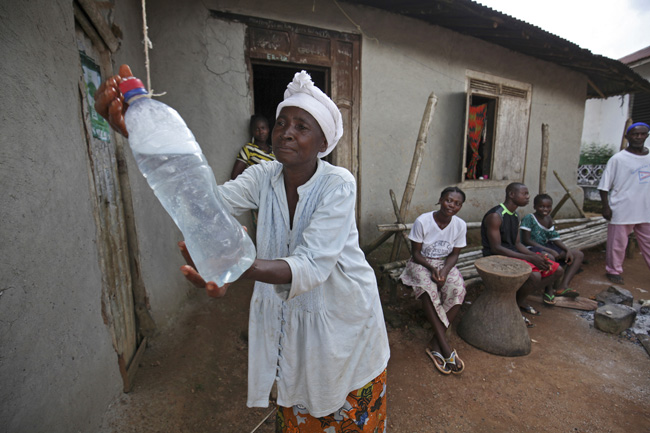 To curb the spread of Ebola, a Liberian woman washes her hands using a bottle of chlorine water in Jene Wonde, a village near the border with Sierra Leone, Nov. 9. Money from Catholic Relief Services is being used to train heath workers, ensure safe and dignified burials, and maintain local Catholic-run health care facilities. (CNS photo/Ahmed Jallanzo, EPA)

RYE, N.Y. (CNS) — Catholic organizations and dioceses in the United States have responded to the outbreak of Ebola in West Africa with both generosity and extreme caution.

The money is being used to train heath workers, ensure safe and dignified burials, develop and implement prevention awareness campaigns, maintain local Catholic health facilities and provide food to those in need. CRS is the U.S. bishops’ international relief and development agency.

In a telephone interview Nov. 7 from Senegal, Michael Stulman told Catholic News Service, “There has been progress in all three countries, but there is a lot more to do.” Stulman is the CRS regional information officer for West and Central Africa. He traveled recently throughout the affected areas.

In Guinea, Sierra Leone and Liberia, the epidemic has killed almost 5,000, out of more than 13,000 reported cases, according to the U.S. Centers for Disease Control and Prevention. A total of 22 cases have been identified in Mali, Senegal and Nigeria. The outbreaks in Senegal and Nigeria were declared over in October and the single case in Mali was associated with a traveler.

There is also an outbreak in the Democratic Republic of the Congo in central Africa, with 67 cases. Other African countries are not affected.

Ebola is one of the world’s most virulent viruses, with a fatality rate of up to 90 percent, according to the World Health Organization, which notes there is no effective vaccine at this time. It is highly contagious and transmitted by direct contact with the blood, body fluids and tissues of infected people and animals.

Sierra Leone has 4,862 cases, including 1,130 deaths, according to the CDC. CRS has 120 staff and volunteers in Sierra Leone, Stulman said. They have focused on door-to-door education programs to help people understand that Ebola is real and to teach about protection and prevention, he said.

“Ebola is new to West Africa. No one has really seen anything on this scale,” Stulman said.

He said CRS is working closely with Catholic counterparts and other churches in Sierra Leone to provide safe and dignified burials for Ebola victims. The scale of deaths from Ebola and the likelihood of contagion from the bodies “requires a big shift in how people ordinarily honor the dead,” Stulman said.

In Liberia, CRS is working with a network of Catholic hospitals to provide routine health care and develop systems and structures to protect patients and staff from Ebola, Stulman said. It is also trying to help reopen St. Joseph’s, the country’s second largest hospital, that closed when the lead doctor and other medical staff contracted Ebola.

The painstaking effort includes significant staff training and the implementation of a new triage system to separate Ebola cases from more common diseases that may have similar symptoms initially, Stulman said.

He said CRS’s long-term presence in Sierra Leone and collaboration with local religious leaders made it easier and quicker to spread educational messages.

In a Nov. 6 letter, CRS president and CEO Carolyn Woo and Bishop Richard E. Pates of Des Moines, Iowa, urged congressional leaders to speak out in support of the on-the-ground response to the Ebola virus and tamp down reactions based on unfounded fears. Bishop Pates is the chairman of the USCCB Committee on International Peace and Justice.

“Morally and practically, we cannot completely wall ourselves off from this disease,” they wrote. “Only by caring for and treating those infected by the disease where it is now running rampant, can we be safer here at home. With prudent measures to protect U.S. public health, it is important to make it possible for badly needed health and other workers to go to West Africa in order stop the crisis at its source and ultimately to protect our own people.”

The New Jersey-based Healey International Relief Foundation has spent $500,000 on Ebola aid to Sierra Leone since July, according to its executive director, Benjamin Parra. The group sent an initial shipment of food, medical supplies and household goods. It also has made local purchases of food and mobilized people to provide awareness education and washing stations.

Parra said a Healey Foundation coordinator works with five staff and 10 volunteers through Caritas in Freetown Sierra Leone. The foundation began relief work in Sierra Leone in 2005. Its Ebola response includes expansion of an existing orphanage and foster care assistance to children who have lost their families.

Parra anticipated the foundation will need an additional $500,000 to provide additional health care.

Acting out of “an abundance of caution,” the Diocese of Rochester, New York, has forbidden the dozen African priests who minister in the diocese to travel to West Africa for nonessential vacations or personal reasons. The restriction includes Guinea, Liberia, Sierra Leone, Ghana, Senegal, Mali and Nigeria, as well as connecting flights through those countries.

Doug Mandelaro, diocesan director of communications, said the directive applies to “priests who work and minister here full-time and who originate from their dioceses in Africa.”

He said it is “based on a concern that, should the situation change, these men might be subject to government travel and medical restrictions … that might prevent their return for an extended period of time.”

In the Archdiocese of Louisville, Kentucky, Susan Sherman, a Catholic school teacher resigned in October after she was asked to take a precautionary 21-day paid leave after a mission trip to Kenya, in East Africa.

A statement from Cecelia Hart Price, chief communications officer for the archdiocese, said the situation was attributable to an unacceptable communication failure, for which the leadership of the St. Margaret School and the archdiocese apologized to the teacher. The request to take the leave followed unsuccessful attempts to communicate facts and reduce fear among school parents concerned about Ebola during Sherman’s trip, the statement said. “In a perfectly rational, logical world, none of this should have transpired,” it said.

There have been no documented cases of Ebola in Kenya, which is more than 3,000 miles away from Liberia, the epicenter of the West African outbreak.

NEXT: Conference called ‘strong sign’ of importance of traditional marriage