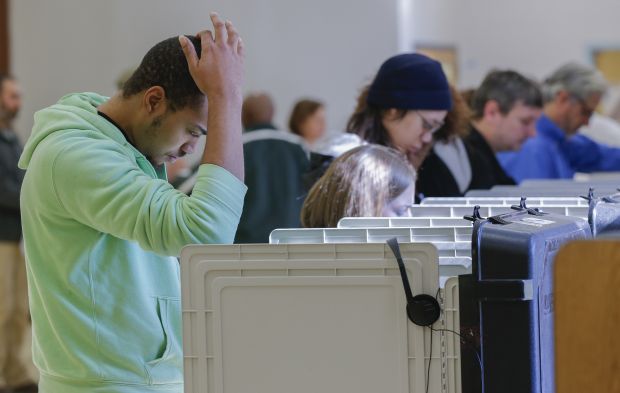 WASHINGTON (CNS) — On a day when Americans are given the opportunity to exercise a right that people in other parts of the world are still fighting for, many of them have chosen, and continue to choose, not to vote.

Though this may appear to indicate a sense of apathy among the U.S. public, the issue of decreased voter turnout in U.S. elections has diverse roots and illustrates more about Americans than just their general feelings toward politics.

Before the Nov. 4 midterm elections, the Pew Research Center for the People and the Press estimated that less than half of voting-age adults would vote. Although the official turnout numbers have not yet been calculated, this prediction follows a trend of declining voter numbers since President Barack Obama’s election in 2008.

“There is a public sentiment that the midterm election is less important, because we’re not voting for president,” Dan Birdsong, a political science lecturer at the University of Dayton, Ohio, said in an interview with Catholic News Service. “Part of that is, I think, a modern construction around the president being the major player in politics. And so the public puts a different level of significance on the race for president than they do for midterms and the national media and other local media tend to not cover it as much.”

Factors such as age, gender, race, religion and socioeconomic status weigh heavily in the voter turnout process. While it may not be surprising that these components affect who, and what party, people vote for, they also can play a large role in whether people vote at all.

Steve Woolpert, the dean of liberal arts and a professor of politics at St. Mary’s College of California in Moraga, said increased economic disparity and polarization among constituents have caused voters to lose “a sense of the common good” and opt not to participate in the democratic process. He contrasted this with the public’s political involvement in the 1950s, when voter turnout peaked in part because of a sense of unity brought about by the public’s general support of U.S. involvement in World War II.

“Fragmenting loyalties, polarization and declining confidence in public institutions, I think, are all contributing to … a general sense that our sense of responsibility to one another and shared purposes aren’t as pronounced as they have been in other times,” he said. “People then lack confidence in the government and become more apathetic about participating and deciding who should be a part of it.”

Today, policies concerning abortion, contraception and same-sex marriage — all of which the Catholic Church opposes — have come to the forefront of many political debates, placing Catholic voters at the intersection of church and state. In the 2012 presidential election, a Gallup poll indicated that the Catholic vote closely followed the national vote.

E.J. Dionne, Washington Post reporter and professor of public policy at Georgetown University, said the diversity among Catholics, which creates such a similarity to the national constituency, can create marked differences in how they vote.

Sister Simone Campbell, a Sister of Social Service, who is executive director of the Catholic social justice lobbying group Network, participates in nationwide bus tours to encourage people to vote. Catholics in particular, she said, have a duty to do so.

“It’s in keeping with our faith,” she said. “We know our faith calls us to community and the way, in our nation, that we build a community and a diverse society is through the democratic process.”

Though Sister Simone does not advocate a particular political party or ideology when she encourages people to vote, she said she thinks Catholics should use church teachings as a guide.

The solidarity of the Catholic vote, according to Woolpert, has weakened over the years as the Catholic community has become “unsure of its own identity.”

Birdsong said he feels that there is a better indicator of how people vote than people’s religious preferences. “Their religiosity — so how much they believe in the Bible, if they believe it’s … the literal word of God (and) how often they attend (church)” is a stronger signifier, he said.

Woolpert agreed that there is a disparity among Catholics in how they vote.

“People have more than one identity. They’re not just Catholic,” he said. “There are all these crosscutting components to a person’s political identity and being Catholic is probably less primary in that constellation than used to be the case.”

NEXT: Look to his history to understand ‘pope of surprises,’ cardinal says