Look to his history to understand ‘pope of surprises,’ cardinal says 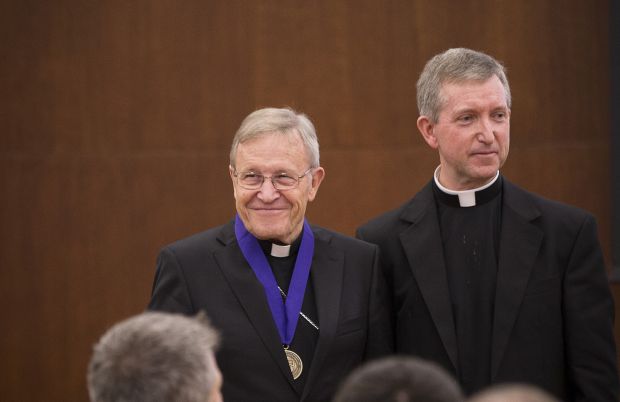 German Cardinal Walter Kasper, retired president of the Pontifical Council for Promoting Christian Unity, wears the 2014 Johannes Quasten Award medallion on a purple ribbon. It was presented to him Nov. 6 by Msgr. Paul McPartlan, acting dean of the School of Theology and Religious Studies at The Catholic University of American in Washington, during an award ceremony on campus. (CNS photo/Tyler Orsburn)

WASHINGTON (CNS) — Pope Francis is clearly “a pope of surprises,” German Cardinal Walter Kasper said in an address in Washington Nov. 6, and those who would try to understand the pontiff, he added, should remember his Argentine roots and how they influence his theology and his world view.

The president emeritus of the Pontifical Council for the Promotion of Christian Unity, Cardinal Kasper was at The Catholic University of America to accept the Johannes Quasten Medal for Excellence in Scholarship and Leadership in Religious Studies.

In a 45-minute address about the pope’s ecclesiology and ecumenical vision to a crowded hall that included many seminarians, Cardinal Kasper said that Pope Francis has, “succeeded in a short time in brightening up the gloomy atmosphere that had settled like mildew on the church.”

However, he acknowledged, every pope has his “proponents and his enemies.” Likewise, Pope Francis has his own detractors, the cardinal said. Those who do not trust his new style or new enthusiasm and may “decide to sit this papacy out.”

“What for some is the beginning of a new spring, is for others a temporary cold spell,” he said.

Cardinal Kasper said Pope Francis “is the first pope to have grown up in a multicultural megalopolis in the southern hemisphere.” That shaped him with some European influences, but he also was strongly affected by Argentine culture, including its films and music.

The cardinal compared the theological influences on Pope Francis with those of his predecessor Pope Benedict XVI. Pope Benedict comes from the best European theological traditions, seeking to put the doctrine of the faith into practice.

“Pope Francis works differently,” Cardinal Kasper said, and not necessarily in the way in which he is sometimes portrayed. “He’s not a Franciscan in disguise, he’s a Jesuit, through and through.” That means, according to the cardinal, that he begins with a concrete situation and seeks to assess it according to the rules for discernment drawn from the Ignatian spiritual exercises, before arriving at a concrete action or position.

That method corresponds to the approach of St. John XXIII during the Second Vatican Council, he said, “reading the signs of the times.”

Understanding Argentina’s variant of liberation theology also is instructive for those who wish to understand Pope Francis, he said.

While in other places in Latin America, the approach focused on the social and political conditions that led to societal inequality, sometimes in a Marxist manner, “Argentinian liberation theology is a theology of the people and their culture.”

It proceeds from a historical and cultural analysis of popular culture, in which people are unified by shared conscience, he said. “It does not want to instruct people, but listen to their wisdom.”

Cardinal Kasper said the pope is a deeply spiritual man who is convinced that the light of the Gospel is the only thing that can help people fully understand and interpret reality.

For Pope Francis, he said, “faith is a light, but not like a lighthouse which expels all dark, but a lighted torch which guides our steps into the night.”

That insight helps to understand how Pope Francis operates, from a basis of the Gospel as an instrument of joy and of reform.

“Pope Francis stands in a great tradition,” Cardinal Kasper said. “He does not represent a liberal tradition, but a traditional position,” as in going back to the Gospels as the source and strength of renewal for the church.

“He does not represent a traditionalist or a progressive scheme,” he said, “but builds a bridge back to the origins. He has constructed a bridge to the future.”

Particularly through his constant message of the need for mercy, Pope Francis emphasizes that, as St. Thomas Aquinas said, “God is not bound by our views of justice,” but only to God’s own desires. “God allows himself to be moved by the needs and sympathies of man.”

“For him, a new beginning and a new chance are always possible. It’s impossible that any human being can fall into a hole from which there is no way out.”

Cardinal Kasper said another message of Pope Francis is that it is important that the church not be so self-centered.