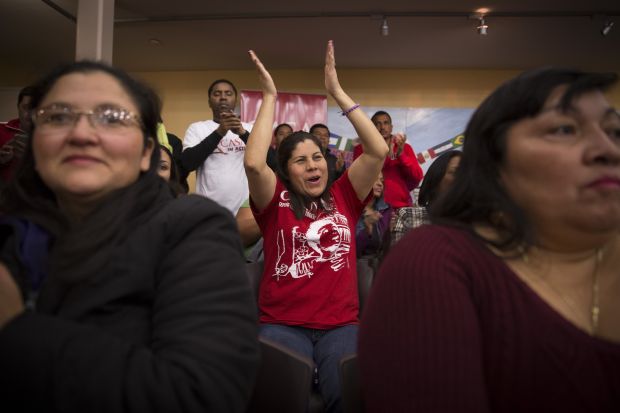 HYATTSVILLE, Md. (CNS) — The meeting room in the middle of Maryland’s most immigrant-dense ZIP code Nov. 20 was full of people who epitomize the problems President Barack Obama is trying to address with executive action.

Families with roots in Mexico, El Salvador and Guatemala — some with U.S. citizen children, some with one adult child who has legal permanent residency (a green card), and other adults who are in the country illegally — all watched the big screen as Obama announced his plans for allowing perhaps 40 percent of the 11 million people without legal immigration status to be temporarily protected from deportation.

The package of administrative actions — explained in more detail starting with an Obama appearance Nov. 21 in Nevada — includes reprioritizing who the government will target for deportation, cracking down primarily on dangerous criminals and new arrivals at the border.

“We’re going to keep focusing enforcement resources on actual threats to our security,” Obama said in his televised address from the White House. “Felons, not families. Criminals, not children. Gang members, not a mom who’s working hard to provide for her kids. We’ll prioritize, just like law enforcement does every day.”

Another component will change the approach in granting visas to foreign students in science and technology who want to remain in the U.S. after graduation, according to the White House.

The Justice Department also will change the Secure Communities program, under which local law enforcement agencies did immigration screening on behalf of Immigration and Customs Enforcement, leading to circumstances like what a senior administration official described as a “broken taillight arrest.”

In a background telephone briefing before the president’s announcement, the official said, “An arrest for a broken taillight alone is not going to trigger ICE pickup.”

That’s the sort of thing that Carlos Velasquez said is so helpful about the president’s actions.

Velasquez, attending the Hyattsville viewing party with other members of St. Camillus Church in nearby Silver Spring, where he is active in a variety of ministries, said he knows many, many families who will potentially benefit from the extension of deferred action to new segments of the population.

So happy the words tumbled out in a giddy mixture of English and Spanish, he said, “They’re going to be safe! Some people get to be no longer afraid they will be arrested and deported for just walking down the street or driving or going to work.”

Obama’s orders basically would expand upon the 2-year-old program known as Deferred Action for Childhood Immigrants, or DACA. Through it, more than half a million young adults and teens who came to the U.S. as minors have been promised they won’t be deported if they stay out of trouble.

In exchange for registering with the government, going through background checks and other requirements and paying fees, they received work permits and Social Security numbers. More than 600,000 people have applied for the program launched in summer 2012. Of that, 27,000 applications were rejected (and could perhaps be resubmitted) and about 16,000 have been denied. Others are in various stages of the approval process.

The new program would offer the same deal to parents of U.S. citizens or green card holders who have lived in here for at least five years, a potential pool of more than 4 million people, according to the White House. Both the parents-of-citizens program and DACA will now be good for three years, and renewable.

The program is expected to be up and running in the spring.

The administration officials said they estimate about 270,000 additional people will be eligible for DACA under new rules that drop the previous age limit of under-30 and roll forward the date by which applicants need to have arrived in the U.S. to 2010 from the original date of 2007.

Though the audience at the offices of CASA de Maryland, a community organizing service, was quiet throughout the 15-minute address, broadcast with simultaneous Spanish translation on Telemundo, the moments leading up to the president’s appearance were filled with cheerful chanting and applause as residents of the neighborhood stood to tell their stories.

“Si, se pudo!” they chanted, or “yes, we could,” or maybe “yes, he could.” That’s the past tense of the “si, se puede” or “yes, we can,” that has long been popular in rallying migrants to various causes.

Among those who were quick to applaud the president’s plans were, Archbishop Joseph E. Kurtz of Louisville, Kentucky, president of the U.S. Conference of Catholic Bishops, and Seattle Auxiliary Bishop Eusebio L. Elizondo, chairman of the USCCB Committee on Migration.

“We welcome any efforts … that protect individuals and protect and reunite families and vulnerable children,” said Bishop Elizondo in a statement from the USCCB.

Archbishop Kurtz quoted Pope Francis in saying every human being bears the image of Christ. “We ourselves need to see, and then to enable others to see, that migrants and refugees do not only represent a problem to be solved, but are brothers and sisters to be welcomed, respected and loved.”

The Catholic Legal Immigration Network, known as CLINIC, also welcomed the package of executive actions, including plans to make it easier for immigrants who lack legal status to travel to their home countries without penalty.

Jeanne M. Atkinson, executive director CLINIC, said, “however, administrative relief is no substitute for legislative reform. We need a permanent fix to the immigration system that can only be achieved through bipartisan Congressional action.”

She added that the network has been gearing up to meet the need for legal advice the deferred action program will trigger. “We will be ready.”