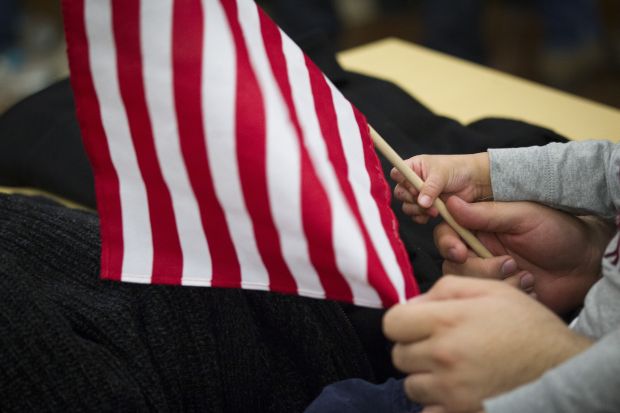 Advocates for the immigrant community, including national and international church agencies, continued their call for Congress to enact comprehensive immigration reform that would include much of Obama’s executive action announced Nov. 20.

Among the supporters of Obama’s action was Archbishop Thomas G. Wenski of Miami, chairman of the U.S. bishops’ Committee on Domestic Justice and Human Development.

He was joined by more than 200 people attending the archdiocese’s annual Catholic Legal Services banquet celebrating the accomplishments of immigrant Americans in greater Miami in watching the president’s televised speech. The response of the immigration lawyers in attendance was generally positive, he said.

“What President Obama did will provide relief for a significant number of people,” the archbishop told Catholic News Service Nov. 21. “But it’s just that. It’s sort of like putting a Band-Aid on a wound. We still need Congress to act to provide comprehensive immigration reform. That’s the real solution.”

Archbishop Wenski urged critics in Congress to “take a deep breath and get control of themselves and enact comprehensive immigration reform.”

“They should be able to do that in a bipartisan way. What Obama did was provide relief for a significant number of people. But it’s not sufficient. He couldn’t do anything more than what he did. He did everything possible within his legal authority.”

Elsewhere, some of the most vocal reactions came from members of Congress. Predictably, the comments broke along party lines, and the debate among legislators on exactly what shape immigration reform will take will likely continue into the future.

In a statement released after Obama’s speech, House Speaker John Boehner of Ohio said: “By ignoring the will of the American people, President Obama has cemented his legacy of lawlessness and squandered what little credibility he had left.”

Boehner said the president’s “my way or the highway approach makes it harder to build the trust with the American people that is necessary to get things done on behalf of the country” and that now “Republicans are left with the serious responsibility of upholding our oath of office. We will not shrink from this duty, because our allegiance lies with the American people.”

“We will listen to them, work with our members, and protect the Constitution,” he added.

As soon as the president finished speaking, several Republican leaders called his planned immigration reform an abuse of power because Obama had not worked with Congress on it. Some threatened to file lawsuits in an attempt to block the president’s actions.

Sen. Rand Paul, R-Kentucky, said he “will not sit idly by and let the president bypass Congress and our Constitution.”

In a statement released after the president’s speech, he said: “President Obama is not above the law and has no right to issue executive amnesty. His actions blatantly ignore the separations of powers and the principles our country was founded on. The president has said 22 times previously that he does not have the power to legislate on immigration.”

Sen. Marco Rubio, R-Florida, said immigration reform was needed but he disagreed with the president’s plan, saying the borders must first be secured and immigration laws enforced.

“The president’s actions now make all of this harder and are unfair to people in our immigration system who are doing things the right way,” he said in a statement.

Even before the president publicly announced his immigration plan, congressional Democrats promised to stand behind his efforts.

“Immigrant communities have waited too long for House Republicans to catch up with the American public’s support for comprehensive immigration reform,” said a Nov. 17 letter to the president signed by leading top Democratic senators.

House Democrats sent Obama a similar letter Nov. 13 signed by 116 representatives who demanded “bold and meaningful executive action” and said they would stand behind the president in his efforts to “to protect American families, strengthen local communities and grow the economy.”

After the president’s announcement, Senate Majority Leader Harry Reid of Nevada called the plan “great news” to keep families together.

“The American people have waited for us to fix our country’s broken immigration system,” he said, in a statement, noting that the lack of congressional action on this issue left the president “no option but to take matters into his own hands.”

He also called the plan a “good first step” but “only a temporary solution,” and urged his Republican colleagues to “put their partisan politics aside and focus their efforts on passing legislation that will permanently fix our broken immigration system.”

Among agencies working with immigrant communities in the delivery of services, the plan was welcomed.

At Catholic Charities USA, Father Larry Snyder, president, said the organization was hopeful Obama’s plan will lead to much-needed legislation to provide workers with a path to permanent citizenship. He welcomed aspects of the president’s plan that would prevent families from being split up and protect children fleeing violence in their homeland.

“In the Gospel of St. Matthew, Jesus says that when we welcome a stranger in his name, we welcome his presence into our hearts,” Father Snyder said in a statement. “In the faces of these men, women and children, we are called to see the face of Christ and provide a just and compassionate welcome in a way that represents their inherent dignity as fellow daughters and sons of God.”

Bill O’Keefe, vice president of advocacy and government relations at Catholic Relief Services, said the president’s actions are “a temporary solution to problems in our outdated and unjust immigration system,” but still serve as “a ray of hope to the hopelessness in much of Mexico and Central America.”

O’Keefe said in a statement that the conditions that push migrants to leave their homelands in the first place must be addressed alongside any legal reform effort.

The agency called for deeper investments in job creation, education and the revitalization of rural economies in Honduras, El Salvador and Guatemala so that children and families in those countries can overcome poverty and insecurity that leads to migration.

Sister Simone Campbell, a Sister of Social Service, who is executive director of the Catholic social justice lobbying group Network, supported the plan, saying she was rejoicing in knowing that immigrant parents living in the shadows are more assured that they will not be apprehended with little warning and separated from their children.

She said in a press release that the organization’s nationwide network of grass-roots activists began calling legislators Nov. 21 to urge them to support the Obama plan and to quickly enact comprehensive immigration reform legislation.

The humanitarian agency Church World Service said the president’s action upholds the dignity of the immigrants struggling to survive. The Rev. John L. McCullough, president and CEO, said in a statement that the organization’s supporters and participants had prayed, fasted and organized on behalf of immigrants for years in an effort to change immigration laws.

“Our immigration system has been broken for far too long. The president has the full constitutional authority, and a moral obligation, to keep families together and stop needless deportations. We applaud this historic action,” he said.

“As people of faith, we believe in the dignity of all people, in the unity of all families and in the power of redemption, and that the implementation of this executive action should reflect those values,” he added.

Frank Sharry, founder and executive director of America’s Voice, an organization working on immigration reform, called Obama’s action “the biggest victory for immigrants and their allies in the last 25 years.”

“Giving some 5 million immigrants a chance to work legally and live in dignity, combined with the end of the misnamed Secure Communities program, is a significant step towards bringing our dysfunctional immigration system into balance after years of ramped up deportations, out-of-control enforcement and millions of families being ripped apart,” Sharry said in a statement.

Other supporters of the plan included the National Employment Law Project, American Immigration Council, Alliance for Citizenship and Jim Wallis, president of Sojourners, and the AFL-CIO.

Contributing to this story were Dennis Sadowski and Carol Zimmermann in Washington.

NEXT: Immigration changes will take months, at least, to take effect