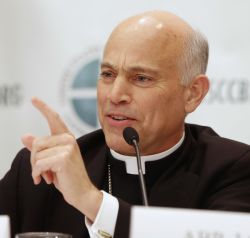 BALTIMORE (CNS) — The U.S. bishops gathered in Baltimore for their annual fall general assembly were urged not to “shy away” from the Catholic Church’s support of traditional marriage even as laws across the country are legalizing same-sex marriage.

“The challenges to religious liberty with regard to the redefinition of marriage grow daily,” said Archbishop Salvatore J. Cordileone of San Francisco, chairman of the Subcommittee for the Promotion and Defense of Marriage, in a Nov. 10 report to the bishops.

The archbishop urged his fellow bishops to continue their work on the issue, taking to heart the words and example of Pope Francis to advance a “culture of encounter, accompaniment and witness.”

He said the recent decision by the U.S. Court of Appeals for the Sixth Circuit upholding traditional marriage laws in Michigan, Ohio, Kentucky, and Tennessee was a “significant win for marriage” and will likely bring the issue to the Supreme Court.

But Archbishop Cordileone said the Supreme Court’s failure in October to review appeals of rulings striking down same-sex marriage bans and other recent circuit court decisions allowing for same-sex marriages brings “the number of states where marriage has effectively been redefined in the law” to 32.

He warned that society’s redefinition of marriage “brings complex challenges — pastoral, sacramental and legal” — and he also emphasized that the church’s “accompaniment of those who experience same-sex attraction is particularly important.”

The Catholic Church upholds marriage as between one man and one woman and teaches that any sexual activity outside of marriage is sinful. The church also teaches that homosexual attraction itself is not sinful and that homosexual people “must be accepted with respect, compassion and sensitivity.”

The archbishop encouraged his fellow bishops to continue their support of traditional married couples and families and emphasized the importance of upcoming gatherings such as the World Meeting of Families in Philadelphia next September and the world Synod of Bishops on the family next October.

“The church is being called to embrace a renewed catechesis on marriage and family” in preparation for these meetings, he said.