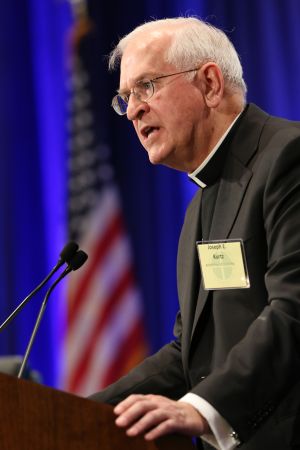 BALTIMORE (CNS) — Acknowledging that families come with complications, the president of the U.S. Conference of Catholic Bishops reminded his fellow bishops Nov. 10 that their role is to accompany their family of the church through their fears and concerns.

“Evangelizing means witnessing to our hope in Jesus,” said Archbishop Joseph E. Kurtz of Louisville, Kentucky, in opening the USCCB’s annual fall general assembly in Baltimore. It was his first address as conference president.

“As pastors, we accompany so many families who face their own fears and concerns and who yearn to experience the love of Jesus in and through his loving family — the church,” he said. “Together, brothers, we seek to walk with these families and to build their confidence in faith.”

The two discussed how they learned to communicate with their brothers through the things that were important to their siblings — film and books — and that they otherwise could be difficult to understand.

“Paolo has learned to understand Giovanni, because they’re family,” Archbishop Kurtz said, continuing the metaphor as an example of what the bishops are called to do — “walk with our brothers and sisters, helping them grow closer to Jesus through his mercy.”

He noted that Pope Francis has said the church is “a place of mercy freely given, where everyone can feel welcomed, loved, forgiven and encouraged to live the good life of the Gospel.”

Archbishop Kurtz spoke about the recently concluded extraordinary Synod of Bishops on the family, saying it resulted in positive steps to “witness to the beauty of church teachings on marriage,” to “deepen the way we accompany those struggling with the many challenges families face today,” and encourage married couples to “have confidence in their ability to faithfully live the Gospel of the family.”

He said the bishops “must especially seek out those who suffer under the weight of the difficulties of seeking to come closer to Christ,” quoting Pope Francis’ call to approach the coming year before the synod work continues as “joyful messengers of challenging proposals, guardians of the goodness and beauty which shine forth in a life of fidelity to the Gospel.”

The archbishop commented about some of his experiences over the last year as USCCB president — such as visiting the Philippines with Catholic Relief Services to see the relief work after Typhoon Haiyan, and the conference’s work on issues such as religious freedom and respect for life.

“We all strive to be faithful pastors, so we know what this looks like,” he said. “Think of the home visits we’ve all done in parishes. When I’d come to someone’s home, I wouldn’t start by telling them how I’d rearrange their furniture. In the same way, I wouldn’t begin by giving them a list of rules to follow.

“Instead, I’d first spend time with them, trying to appreciate the good that I saw in their hearts. I’d acknowledge that, like them, I was in the process of conversion toward greater holiness,” the archbishop said. “I would then invite them to follow Christ and I’d offer to accompany them as we, together, follow the Gospel invitation to turn from sin and journey along the way. Such an approach isn’t in opposition to church teachings; it’s an affirmation of them.”

PREVIOUS: Look to his history to understand ‘pope of surprises,’ cardinal says

NEXT: Bishops reminded of role as pastors to Christ’s family — the church