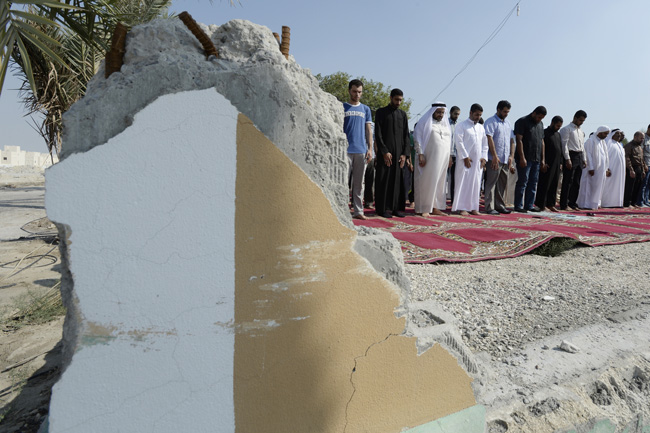 In this 2013 file photo, Shiite Muslims pray at the site of a demolished mosque in Nuwaidrat, Bahrain. Two dozen Catholic and Muslim leaders and scholars urged dialogue to promote greater respect and understanding and condemned all acts of violence committed in the name of religion. (CNS photo/Mazen Mahdi, EPA)

VATICAN CITY (CNS) — Gathering at “a time of severe tension and conflict,” particularly in the Middle East, 24 Catholic and Muslim leaders and scholars urged dialogue to promote greater respect and understanding and condemned all acts of violence committed in the name of religion.

The Catholic-Muslim Forum met at the Vatican Nov. 11-13 while newspapers continued to be filled with stories of Islamic State forces committing violence against Christians and other minorities in Iraq and Syria, and just days after violence erupted around the Jerusalem holy site known as Haram al-Sharif by Muslims and as the Temple Mount by Jews.

The 12 Catholic and 12 Muslim participants in the forum “unanimously condemned acts of terrorism, oppression, violence against innocent persons, persecution, desecration of sacred places, and the destruction of cultural heritage,” said a statement released at the end of the meeting.

“It is never acceptable to use religion to justify such acts or to conflate such acts with religion,” said the delegates, who were led by Cardinal Jean-Louis Tauran, president of the Pontifical Council for Interreligious Dialogue, and Seyyed Hossein Nasr, a professor of Islamic studies at George Washington University in Washington, D.C.

The Catholic-Muslim Forum was established in 2008 after more than 100 Muslim scholars launched the “Common Word” initiative, asking then-Pope Benedict XVI and other Christian leaders to support interreligious dialogue projects focused on highlighting the values Christians and Muslims share.

Pope Francis, who is to visit Turkey Nov. 28-30, met participants briefly Nov. 12 before his general audience. A Vatican statement said the pope encouraged them “to persevere on the path of Christian-Muslim dialogue, and was pleased to note their shared commitment to the selfless and disinterested service of society.”

At the meeting, participants discussed ways to work together to serve young people, ways to enhance Catholic-Muslim dialogue and ways to collaborate more in serving society.

In their final statement they said the education of young people in the family, at school and at church or in a mosque “is of the utmost importance for the promotion of a well-rounded identity which builds respect for others. To this end, school curricula and textbooks should portray an objective and respectful image of the other.”

They also reaffirmed their commitment to dialogue for deepening mutual understanding.

“This is required to overcome prejudice, distortions, suspicions and inappropriate generalizations, all of which damage the peaceful relationships we all seek,” they said.

NEXT: Pleading for peace, bishops in Mexico call violence a ‘national crisis’