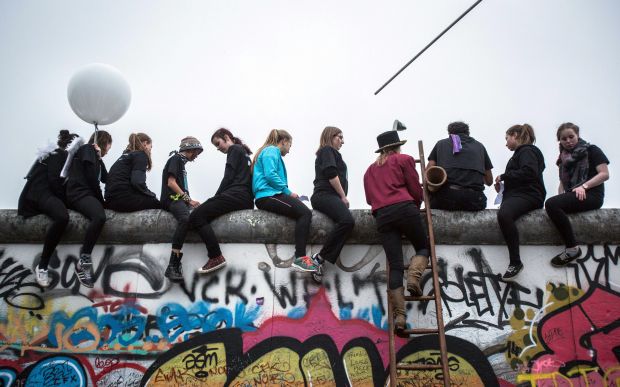 People sit on the East Side Gallery and watch a circus performance in Berlin Nov. 9. (CNS photo/Maja Hitij, EPA)

WARSAW, Poland (CNS) — The president of the German bishops’ conference praised Catholics who helped bring down the Berlin Wall, but also urged the church to look ahead to its future mission.

“Without the prophetic power of St John Paul II and many dissidents, the miracle of European unification wouldn’t have happened,” said Cardinal Reinhard Marx of Munich-Freising during a symposium sponsored by the bishops’ conference Nov. 8.

“We who have enjoyed the fruits of this harvest remain in their debt, and I regret the legacy of civil rights activists occupies such a small place in our memories today,” Cardinal Marx said.

Few people, even in 1989, had anticipated the wall’s collapse, while many had “resigned themselves” to Germany’s continued division “as long as it did not seriously affect their interests,” he recalled.

Noting that the impetus for overcoming communist rule had come from “the streets of Eastern Europe,” Cardinal Marx said Europe’s reunification had been followed by a war in the Balkans, which still posed “a long-term challenge for the European peace project.”

“Special thanks must be offered today to those men and women who took to the streets in the revolutionary autumn of 1989,” Cardinal Marx said.

“But we need a political culture which ensures history doesn’t receive more power over the present than it’s entitled to.”

The 124-mile Berlin Wall, separating the Federal Republic of Germany from the communist-ruled German Democratic Republic, was completed on Aug. 13, 1961, and breached on Nov. 9, 1989, during revolutionary change in Eastern Europe that led to Germany’s formal reunification 11 months later.

Catholic Church leaders marked the anniversary with a prayer service at Berlin’s St. Hedwig Cathedral, while 7,000 glowing balloons were released at the nearby Brandenburg Gate.

Addressing the cathedral service, Cardinal Marx said St. John Paul had been a “genius of political and spiritual vision,” who hastened the wall’s collapse by backing the freedom struggle in his native Poland.

He added that the Catholic Church had allowed its premises to be used by opposition groups and helped ensure peaceful resistance.

“But the church now needs to build a culture of memory oriented to the future and work out how to conduct its mission in a free, pluralist society,” the cardinal said.

Parallel church commemorations took place other eastern German cities, including Magdeburg, where Bishop Gerhard Feige called on Catholics to continue speaking out “when life and dignity are violated or at stake.”

NEXT: Pope urges G-20 focus on helping the poor, says ‘lives are at stake’