Pope urges G-20 focus on helping the poor, says ‘lives are at stake’ 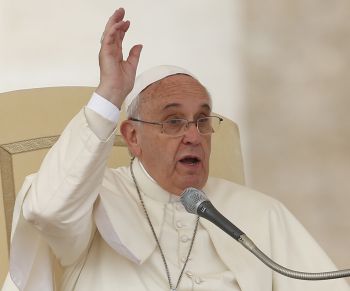 VATICAN CITY (CNS) — As world leaders prepared to meet in Australia to continue looking at ways to improve the global economy, Pope Francis asked them “not to forget that many lives are at stake” behind their discussions and decisions.

The measure of success of the Group of 20 heavily industrialized and emerging-market countries will not be found in statistics, but in “real improvements in the living conditions of poorer families and the reduction of all forms of unacceptable inequality,” the pope said in a message.

The pope’s message to Australian Prime Minister Tony Abbott, host of the Nov. 15-16 leaders’ summit, was released Nov. 11 at the Vatican.

“Throughout the world, the G-20 countries included, there are far too many women and men suffering from severe malnutrition, a rise in the number of the unemployed, an extremely high percentage of young people without work and an increase in social exclusion which can lead to criminal activity and even the recruitment of terrorists,” the papal message said.

While the G-20 leaders’ summit first took place in the wake of the global financial crisis that began in 2008 and has focused on financial and economic questions, Pope Francis said that, given its membership, concerns about war and violence naturally arise and have, at times, meant disagreement among members.

Working with the United Nations, he said, the world expects the G-20 countries to find a way to put “a definitive halt to the unjust aggression directed at different religious and ethnic groups, including minorities, in the Middle East.”

The leaders also need to find ways to eliminate the “root causes of terrorism, which has reached proportions hitherto unimaginable,” the pope said. Those root causes include “poverty, underdevelopment and exclusion.”

While the world generally agrees the international community has an obligation to stop unjust aggressors and the commission of crimes against humanity, Pope Francis urged the G-20 leaders to recognize an obligation “to protect citizens of all countries from forms of aggression that are less evident but equally real and serious. I am referring specifically to abuses in the financial system such as those transactions that led to the 2008 crisis, and more generally, to speculation lacking political or juridical constraints and the mentality that maximization of profits is the final criterion of all economic activity.”

“A mindset in which individuals are ultimately discarded will never achieve peace or justice,” he said.