Minority communities wonder why Iraqi government fails to protect them 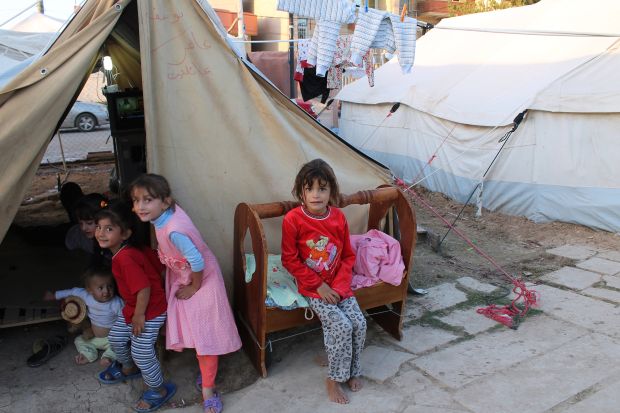 Iraqi children play outside a tent where some 300 Kaka'i are living in Ainkawa, near Irbil in the Kurdistan region of Iraq in late October. The Kaka'i, a lesser known religious minority, were forced to flee their homes in northern Iraq by Islamic State militants in August. (CNS photo/Dale Gavlak)

AINKAWA, Iraq (CNS) — Two months after 3-year-old Christina Khider Abada was snatched by Islamic State militants from a bus as her family helplessly watched, Ayda Abada wonders about the fate of her daughter.

Now sheltering in an unfinished building in the Christian enclave of Ainkawa outside of Irbil, the capital of the Kurdistan area of northern Iraq, Abada replays the scene over and over in her mind.

“Tears flooded down like rain when I saw an Islamic State militant about 60 years old snatch my daughter from my arms,” she told Catholic News Service in late October. “He refused to return her to me despite my frantic pleas.”

Two months after the tragedy, Abada’s Syriac Catholic family suffers from loss, grief and despair like so many other religious minorities in Iraq targeted by the brutal Islamic State attacks. Not only are many of Iraq’s religious minorities speaking out against the militants, but they are questioning why the Iraqi government has failed to protect them.

Abada said she, her husband and Christina remained in their Christian village of Qaraqosh after the Islamic State takeover in August because her husband is blind. They sent their four other children away with relatives, fearing for their safety. They only kept Christina with them because of her young age.

After Christina’s abduction, the militants expelled Abada and her husband from the town.

“We were forced to walk six hours and swim across a stream before finding safety in Iraq’s Kurdish region,” she said.

Others who could not forge the stream drowned, she said.

Nearby the family, who lives in an unfinished building, are some 2,500 other Syriac Catholics who also fled Islamic State in Qaraqosh.

A man, 71, said he had to carry his 100-year-old, blind mother on his back as he and his family escaped.

“I prayed to my God,” the man, Abu Yasser, said of the frantic escape. “The town was being shelled. Everything I ever worked for in my life had to be left behind. I am grateful that my family is alive and with me.”

“But at this point in my life, it is strange to be living with a blanket covering a concrete floor where I now sleep. Our situation is very difficult,” he said.

Abu Yasser asked to be identified by his nickname because he feared retaliation against relatives in Iraq. Arabs prefer to be identified as Abu or Um, the father or mother of the eldest son — in this case Yasser — as a sign of respect.

Across town, about 300 Kaka’i people sheltered outdoors, camping in a park. The Kaka’i are among Iraq’s lesser-known religious minorities.

They maintain secrecy about their beliefs, which may contain elements of Shiite Islam and Zoroastrianism. David, the Old Testament king, also reportedly is revered. Islam considers David one of its prophets.

“We were already frightened hearing about the killings and other atrocities committed by Islamic State militants, so when they entered our town of Hamdaniya, about a half hour from Mosul, we were terrified,” said a woman who identified herself as Um Ayoub.

“We grabbed some clothes and our children and fled,” said the young Kaka’i mother of four.

“Why did they kidnap a 3-year-old Christian child? And why do they sell the Yezidis in the market as slaves?” she asked.

In September, the United Nations said it would send a team to Iraq to investigate suspected crimes — specifically forced conversions, slavery, sexual abuse and the besieging of entire communities — committed by the Islamic State group.

The religious minority communities make up the bulk of the 850,000 internally displaced people who now shelter in the Kurdish areas of northern Iraq.

“More than half that number are in the Dohuk region,” said David Swanson, spokesman for the U.N.’s coordinator of humanitarian affairs in northern Iraq.

In times past, travel to Dohuk passed through Mosul, but with the Islamic State group occupying Iraq’s second-largest city and surrounding areas, the journey through more mountainous routes takes about three hours by car from Ainkawa.

In Dohuk, Yezidis make up the majority of those displaced. A heavy atmosphere hangs over the Yezidis, who escaped abduction and survived for days on Sinjar Mountain without food or water.

Each family can recount their personal tale of when the Islamic State group rounded up thousands of men and boys, only to slaughter them. The women and teenage girls were carried off, likely to be used as sex slaves.

A young Yezidi woman, who identified herself as Um Ibrahim, could barely speak. Her blue eyes welled with tears as she remembered how her husband refused to convert to Islam and was murdered in front of her. Another Yezidi woman pleaded to receive humanitarian aid for her young children after her husband and teenage son were dragged off by the militants.

In another area of Dohuk, a Shiite woman burst into tears while recounting the nerve-wracking, weeklong stay for 150 members of her family on Sinjar Mountain.

“I thought that my 6-year-old girl was going to die of starvation. She was so weak,” said the woman, who identified herself as Um Majed.

“The children were crying. I dared only give them a tiny morsel to eat. I thought we would all perish up there,” she said.