Pope calls accountants to remember real people behind the numbers 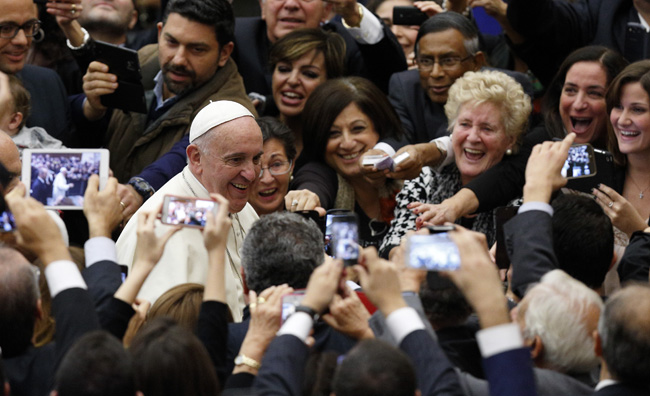 Pope Francis arrives to lead an audience with accountants in Paul VI hall at the Vatican Nov. 14. Meeting with about 7,000 participants in the World Congress of Accountants, the pope pleaded with them to remember that behind every piece of paper that crosses their desks there are real human beings. (CNS photo/Paul Haring)

VATICAN CITY (CNS) — Meeting with thousands of accountants from around the world, Pope Francis pleaded with them to remember that behind every piece of paper that crosses their desks there are real human beings.

“When money is the aim and reason for every activity and initiative,” he said Nov. 14, everything and everyone is placed at its service, and both solidarity and respect for people decline.

Speaking to about 7,000 people participating in the World Congress of Accountants, Pope Francis said the global financial situation particularly highlights the importance of work and the disaster of unemployment.

“From your professional observation point, you are well aware of the dramatic reality of so many people whose employment is precarious, or who have lost their jobs” and of the “many families that pay the consequences.” Many young people struggle to find their first job and, he said, many immigrants are “forced to work ‘under the table,’ lacking the most basic juridical and economic protections.”

When the economy is so tough, he said, people are tempted to try to defend their own positions and interests “without worrying about the common good and without giving much attention to justice and legality.”

In such situations, he said, accountants and others involved in guaranteeing the smooth functioning of economic activity not only must do their jobs well, but also must promote the greater good by remembering that “behind every piece of paper there is a story, there are faces.”

Christian accountants are called to live up to their profession’s code of ethics, Pope Francis said, but they also are called to “go beyond, which means: reaching out to people in difficulty; exercising creativity to find solutions to problems that seem blocked; and ensuring human dignity is valued in the face of rigid bureaucracy.”

For all accountants, he said, it is not enough to be able to answer questions about a balance sheet. “You must keep alive the value of solidarity as a moral attitude and expression of attention toward others who have legitimate needs.”

Repeating his suspicion that the word “solidarity” has been “thrown out of the dictionary” and banned from many people’s vocabularies, Pope Francis said that anyone who wants to pass on a better world to future generations will “assume responsibility for promoting a globalization of solidarity.”

NEXT: Seal of confession is absolute, even after penitent dies, officials say