Seal of confession is absolute, even after penitent dies, officials say 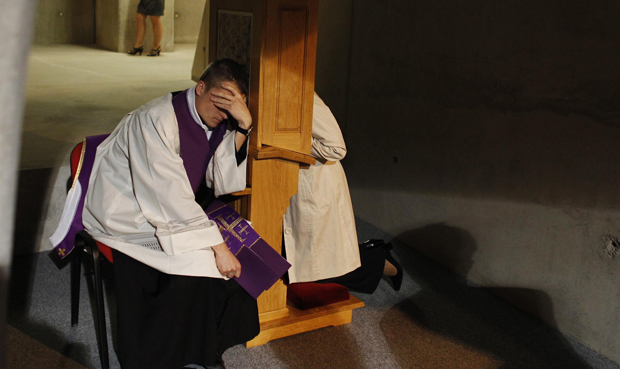 A priest listens to a confession during Mass in 2012 at the Temple of Divine Providence in Warsaw, Poland.

VATICAN CITY (CNS) — The secrecy of a confession is maintained so seriously and completely by the Catholic Church that a priest would be excommunicated for revealing the contents of a confession when ordered to testify by a court or even after the penitent dies, Vatican officials said.

“No confessor can be dispensed from it, even if he would want to reveal the contents of a confession in order to prevent a serious and imminent evil,” said Msgr. Krzysztof Nykiel, regent of the Apostolic Penitentiary, a Vatican court dealing with matters of conscience.

The penitentiary sponsored a conference at the Vatican Nov. 12-13 on “the confessional seal and pastoral privacy.”

According to the Vatican newspaper, L’Osservatore Romano, conference participants heard that since the Fourth Lateran Council in 1215 spelled out the penalties in church law for violating the secret of the confessional, “the discipline of the church in this matter has remained substantially the same,” with the exception of additional protections.

One of those additions, the newspaper said, was a 1988 church law explicitly stating that using an “electronic apparatus” to record, broadcast or otherwise share the contents of a confession also is an excommunicable offense.

Cardinal Mauro Piacenza, head of the Apostolic Penitentiary, told conference participants it is important “to remove any suspicion” that the church’s commitment to the confessional seal “is designed to cover intrigues, plots or mysteries as people sometimes naively believe or, more easily, are led to believe.”

The seal, he said, is intended to protect the most intimate part of the human person, “that is, to safeguard the presence of God within each man.” The effect of the secret, he said, is that it also protects a person’s reputation and right to privacy.

The confessional seal, Msgr. Nykiel said, “is binding not only on the confessor, but also on the interpreter, if present, and anyone who in any way, even casually, comes to know of the sins confessed.”

The church, he said, takes the seal so seriously that it forbids, on the pain of excommunication, a priest from testifying in court about what he heard in the confessional, “even if the penitent requests” he testify.

Not even the death of the penitent can absolve the confessor from the obligation to maintain the secret, Msgr. Nykiel said.

NEXT: Vatican public restrooms to include showers for the homeless