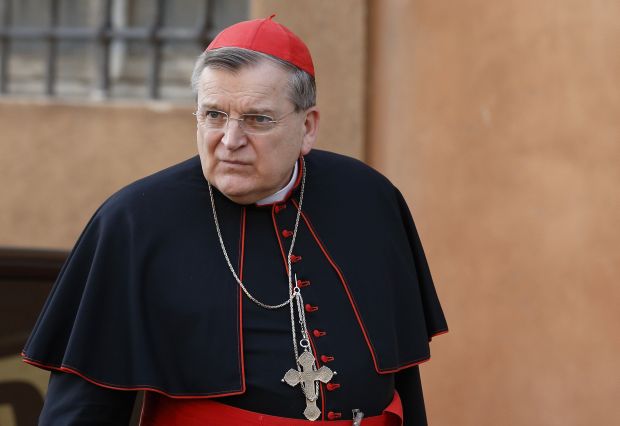 Cardinal Raymond L. Burke, then-prefect of the Supreme Court of the Apostolic Signature, arrives for a session of the extraordinary Synod of Bishops on the family at the Vatican Oct. 14. The Vatican announced Nov. 8 that Pope Francis has removed Cardinal Burke as head of the Vatican's highest court and named him to a largely ceremonial post. He will now serve as cardinal patron of the Knights and Dames of Malta. (CNS photo/Paul Haring)

Cardinal Burke, formerly prefect of the Apostolic Signature, will now serve as cardinal patron of the Knights and Dames of Malta, the Vatican announced Nov. 8.

The move had been widely expected since an Italian journalist reported it in September, and the cardinal himself confirmed it to reporters the following month.

It is highly unusual for a pope to remove an official of Cardinal Burke’s stature and age without assigning him comparable responsibilities elsewhere. By church law, cardinals in the Vatican must offer to resign at 75, but often continue in office for several more years. As usual when announcing personnel changes other than retirements for reasons of age, the Vatican did not give a reason for the cardinal’s reassignment.

A prominent devotee of the traditional liturgy and outspoken defender of traditional doctrine on controversial moral issues, Cardinal Burke had appeared increasingly out of step with the current pontificate.

In December 2013, Pope Francis did not reappoint him to his position on the Congregation for Bishops, which advises the pope on episcopal appointments.

Cardinal Burke expressed frustration, in a February 2014 article in the Vatican newspaper, that many Americans thought Pope Francis intended to change Catholic teaching on certain “critical moral issues of our time,” including abortion and same-sex marriage, because of the pope’s stated belief that “it is not necessary to talk about these issues all the time.”

Insisting that the pope had “clearly affirmed the church’s moral teaching, in accord with her unbroken tradition,” Cardinal Burke blamed perceptions to the contrary on “false praise” of Pope Francis by “persons whose hearts are hardened against the truth.”

After Pope Francis invited German Cardinal Walter Kasper to address a meeting of the world’s cardinals in February, Cardinal Burke emerged as a leading opponent of Cardinal Kasper’s proposal to make it easier for divorced and civilly remarried Catholics to receive Communion.

Cardinal Burke also warned that efforts to streamline the marriage annulment process — the mandate of a commission that the pope established in August — should not undermine the process’ rigor.

During the Oct. 5-19 Synod of Bishops on the family, Cardinal Burke was one of the most vocal critics of a midterm report that used remarkably conciliatory language toward people with ways of life contrary to Catholic teaching, including those in same-sex unions and other non-marital relationships. The day the report was released, the cardinal told an American reporter that a statement from Pope Francis reaffirming traditional doctrine on those matters was “long overdue.”

Cardinal Burke made the news again late in October when he told a Spanish journalist that many Catholics “feel a bit of seasickness, because it seems to them that the ship of the church has lost its compass. The cause of this disorientation must be put aside. We have the constant tradition of the church, the teachings, the liturgy, morals. The catechism does not change.”

A former archbishop of St. Louis, Cardinal Burke was named by Pope Benedict XVI to lead the Apostolic Signature in June 2008. At the time of his dismissal, he was the highest-ranking U.S. bishop at the Vatican. That distinction now belongs to Archbishop J. Augustine Di Noia, adjunct secretary of the Congregation for the Doctrine of the Faith.

The new head of the Apostolic Signature is French Archbishop Dominique Mamberti, formerly secretary for relations with states, the Vatican’s equivalent of a foreign minister.