Pope says annulment process should be cheaper and more efficient 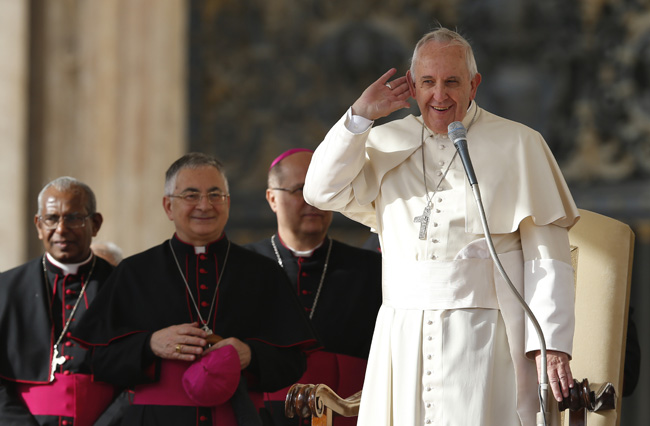 Pope Francis gestures towards the crowd as he begins his general audience in St. Peter's Square at the Vatican Nov. 5. (CNS photo/Paul Haring)

VATICAN CITY (CNS) — Pope Francis said the church’s marriage annulment process should be more efficient and perhaps even free of charge, and he decried any attempts to exploit it for profit.

“Some procedures are so long and so burdensome, they don’t favor (justice), and people give up,” the pope said. “Mother church should do justice and say: ‘Yes, it’s true, your marriage is null. No, your marriage is valid.’ But justice means saying so. That way, they can move on without this doubt, this darkness in their soul.”

The pope made his remarks Nov. 5, in a meeting with diocesan officials and canon lawyers enrolled in a course offered by the Roman Rota, the Vatican tribunal primarily responsible for hearing requests for marriage annulments.

Pope Francis said participants at the Oct. 5-19 Synod of Bishops on the family had expressed a desire to “streamline the process” of judging requests for annulments, and he noted that he had recently established a special commission to do so.

As an example of the burdens faced by those seeking annulments, the pope recalled that a tribunal he oversaw as archbishop of Buenos Aires exercised jurisdiction over dioceses as far as 150 miles away.

“It is impossible to imagine that simple, common people should go to the tribunal. They have to take a trip, they have to miss days of work, also the cost, so many things,” the pope said. “They say, ‘God will understand, I’ll move on this way, with this burden on my soul.'”

Pope Francis warned that annulment cases must not fall within the “framework of business,” which he described as an all-too-frequent occurrence.

“I am not talking about anything unusual. There have been public scandals,” he said.

Apparently referring to his time in Buenos Aires, the pope recalled: “I had to dismiss one person from the tribunal, some time ago, who said: ‘I’ll handle both proceedings, civil and ecclesiastical, for 10,000 dollars.'”

Noting that some participants at the synod had called for making the annulment process free of charge, Pope Francis said “we will have to see,” but added that, “when the spiritual is attached to an economic interest, this is not from God.”

Pope Francis has related difficulties with the annulment process to the situation of divorced and civilly remarried Catholics whose predicament he has said exemplifies a general need for mercy in the church today.

According to church law, such Catholics may not receive Communion unless they obtain an annulment of their first, sacramental marriage or abstain from sexual relations, living with their new partners as “brother and sister.”

A proposal by German Cardinal Walter Kasper to allow some divorced and civilly remarried Catholics to receive Communion without meeting either of those conditions was one of the most controversial topics at October’s synod and is likely to come up again at the world synod on the family in October 2015.

NEXT: Priest among five convicted of bishop’s 2005 slaying in Kenya