Vatican public restrooms to include showers for the homeless 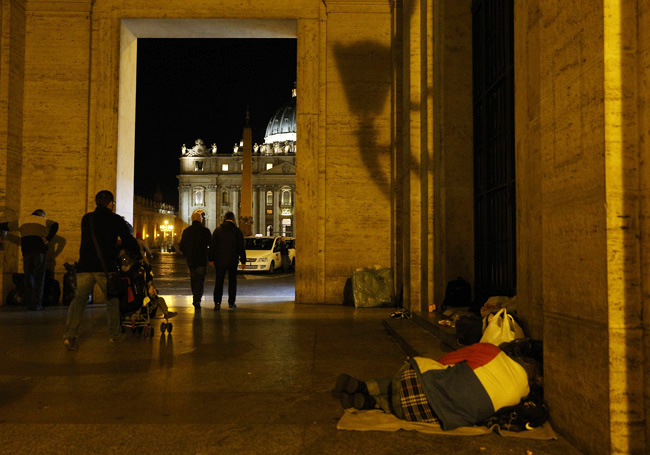 VATICAN CITY (CNS) — The archbishop who distributes charity on behalf of Pope Francis has announced that the public restrooms in St. Peter’s Square will include showers where the homeless can wash.

The service will require volunteers and donations of soap, towels and clean underwear, Archbishop Konrad Krajewski, the papal almoner, told Catholic News Service Nov. 13. “We have to be evangelical, but intelligent, too.”

Several people living on the streets of Rome or in tents say it is not difficult to find a parish or charity that will give them something to eat, but finding a place to wash is much more difficult.

Barbara, a Polish woman who lives in a tent with her teenage son and a companion, said showers in the Vatican’s public restrooms “would be good. We’d thank them if it works.”

Her companion, who calls himself Stefano, said: “I’m a mason without work. I’ll help them build it. No problem.”

“It is not simple. It is easier to prepare sandwiches than to run a shower service,” said Archbishop Konrad Krajewski, the papal almoner.

The news site Vatican Insider first reported the news that Archbishop Krajewski had asked the office governing Vatican City State to include showers in an already-approved project to remodel the public restrooms in St. Peter’s Square.

The remodeling work and installation of the showers was scheduled to begin Nov. 17. The archbishop said the three shower stalls would be located in the public restrooms a few steps north of Bernini’s Colonnade, just behind the Vatican post office.

The archbishop told Vatican Insider that in early October he was talking to a homeless man near the Vatican and discovered it was the man’s 50th birthday. He invited the man to a restaurant for dinner, but the man declined, saying a restaurant would not let him in because of his odor.

Sitting on the steps of the Vatican press office Nov. 13, Barbara and Stefano were discussing the plans with a small group of Polish friends — and expressing some doubts about it to reporters.

The Rome diocesan Caritas, the Community of Sant’Egidio and other organizations offer shower facilities to the homeless in Rome, Barbara said, “but there are so many things you have to do. You have to get there at 4 in the morning to sign in. Then only 15 people get in each day.”

Archbishop Krajewski told Vatican Insider that he is visiting parishes in areas where homeless people gather and is encouraging them to install public showers if they have not already. His office will help fund the building, he said.

“It is not simple,” he said. “It is easier to prepare sandwiches than to run a shower service — you need volunteers, towels, clean underwear.”

PREVIOUS: Seal of confession is absolute, even after penitent dies, officials say