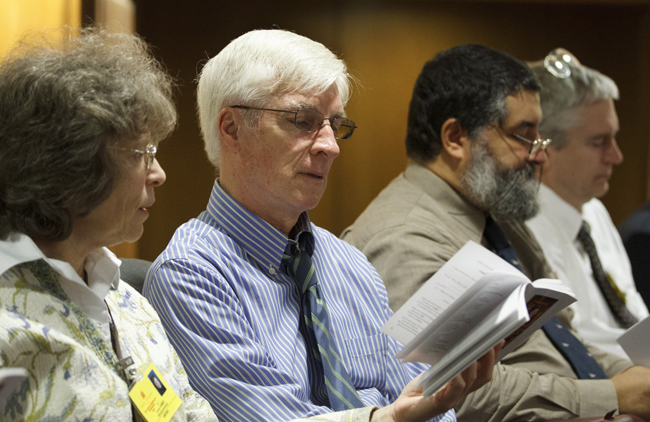 Ralph Martin, center, follows a prayer booklet as he attends a meeting as an expert at the Synod of Bishops on the new evangelization at the Vatican in 2012. (CNS photo/Paul Haring)

SIOUX CITY, Iowa (CNS) — Ralph Martin, a leader in the Catholic renewal ministries movement, told an audience at an evangelization summit in Sioux City that he sees a danger in lukewarm faith and a de-Christianized spirit in society today.

Cardinal Donald W. Wuerl of Washington warned at the last synod, he said, “that our society was being engulfed by a tsunami of secularism. We have to recover our confidence in the truth of our faith.”

Martin, who is president of Renewal Ministries in Ann Arbor, Michigan, was in the Sioux City Diocese recently to address a convocation of priests, a retreat for diocesan staff and a summit on the new evangelization.

For each audience he asked and answered the question, “What’s new with the new evangelization?”

“St. John Paul II provided us with a definition,” he said. “That is: ‘the proclamation of the word of God has Christian conversion as its aim; a complete and sincere adherence to Christ and his Gospel through faith.'”

St. John Paul sensed the moment had come to embrace a new evangelization and had specific ideas on what would make it “new,” explained Martin, the author of “The Urgency of the New Evangelization: Answering the Call.”

In his presentation at St. Michael, he asked, “Who implements this new evangelization?”

“Previously, we thought priests and nuns and people who work full time for the Catholic Church,” he said. “But Pope John Paul said, in referencing Vatican II documents, every single person is called to evangelize and they are empowered to do so when they are baptized.”

Martin believes most Catholics have a foggy idea of what their Catholic mission should be.

Martin added a fourth: A willingness to talk about Jesus.

“If you don’t have the fourth element,” he paused. “It’s core to the others, but it makes us squirm.”

Martin praised Pope Francis who has kicked evangelization up a notch.

“We don’t all have to be preachers, but we have to be able to be informal preachers,” he said. “Bring Jesus, bring prayer, bring your faith into conversations.”

NEXT: Texas bishops argue death-row inmate too mentally ill to be executed