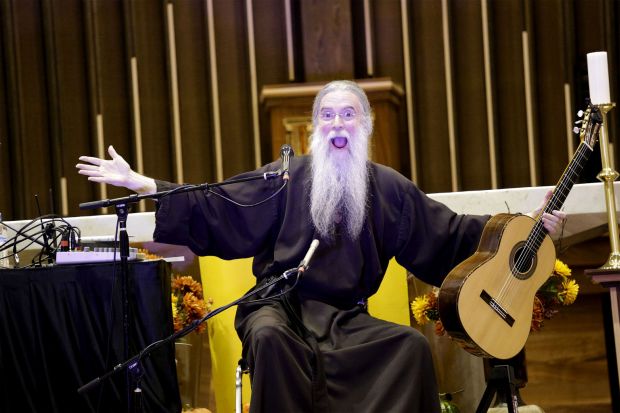 SIOUX CITY, Iowa (CNS) — During his two-day mission in Sioux City, contemporary Christian musician John Michael Talbot was by turns a comedian, a guitarist and a theologian.

“All things are possible with God!” he exclaimed at St. Michael Church and urged those present to repeat after him.

It was those words, Talbot insisted, that would turn the tide against the bad news that just 17 percent of those who identify themselves as Catholics attend weekly Mass.

“Do you know what the second largest denomination in this country is?” he asked. “It’s the 30 million people who are fallen-away Catholics. And they are flocking to Pentecostal churches.”

To counter that exodus, he focused his mission message on two dynamics — better singing and better preaching.

“That will translate to a deeper-engaged encounter, a personal relationship with Jesus,” said Talbot, who is the founder of the Brothers and Sisters of Charity at Little Portion Hermitage in Berryville, Arkansas. Raised a Methodist, he joined the Catholic Church in the late 1970s.

Talbot takes his message on the road to convalescent homes, inviting residents to raise their hands and twitch their fingers.

“I call it praise-ercize,” Talbot proclaimed and then with perfect comedic timing, added an open-mouthed grin.

At St. Michael in late October, Talbot took mission participants on a walk through the liturgy. The word itself, he explained, has its origins in the Greek word “leitourgia,” or “work of the people.”

“It’s not about learning how to say ‘consubstantial,'” he said, eliciting more laughter at the word, which means of the same essence. It replaced the phrase “one in being with the Father” in the Nicene Creed in the revised edition of the Roman Missal implemented in Catholic churches Nov. 27, 2011.

Bringing the liturgy to life must include bringing liturgical music to life, Talbot said.

“Catholics are notoriously known for having the worst music anywhere,” he continued, as a couple of “Amens” were heard from the crowd. “We have to stir up the power of the Holy Spirit through our praise and worship and music.”

“All preachers don’t have to be Fulton Sheen,” he said, referring to the famous New York archbishop and his TV evangelism. “You need doctrine, but you really need to share your faith.”

Talbot shared his music with the crowd. Clad in an unadorned monk’s robe, he had a high-tech receiver clamped to his rope-belt that reverberated songs through an equally impressive Bose sound system. His guitar riffs illustrated why the former Mason Proffit member could still rock with the best.

Talbot was part of that band with his brother, Terry, in the early 1970s. Then, both embraced an evangelical brand of Christianity and started releasing albums infused with Christian themes. John Michael Talbot became a Catholic in 1978.

Even with terrible music and boring preaching, Talbot said, there is one reason why Catholics need to be at Mass.

“Jesus is here,” he said, gesturing to the tabernacle. “Jesus comes from the eternal to the ‘now’ for each of us personally.”

“Get with the program of good singing and good preaching!” Talbot’s voice rang out in a “Sinners in the Hands of an Angry God” reverberation.

The current situation could be summed up in a “Dr. Phil” quote.

“How’s that workin’ for ya?” inquired Talbot — the only Catholic presence on Trinity Broadcasting Network — who began sharing his televised messages of hope and inspiration each week on “All Things Are Possible” last year.

Talbot’s prayer was that after his mission, Mass would never be the same again for those in attendance.

“We have to have a revival in America, in our parishes, in our lives,” he said.