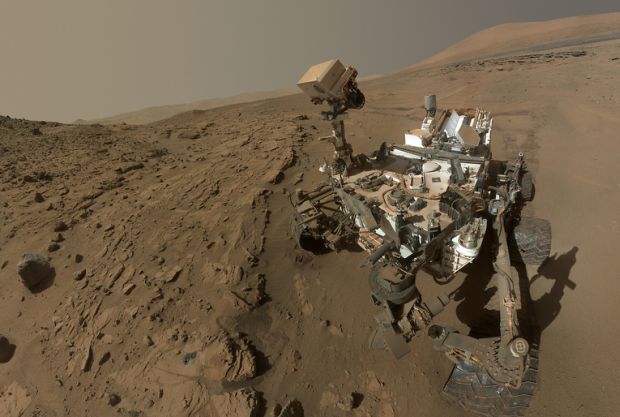 NASA's Curiosity Mars rover used the camera at the end of its arm in April and May 2014 to take dozens of component images combined into this self-portrait. An analysis of several national surveys found that Catholics are more supportive than people of other faiths of the U.S. probing the depths of space and the search for extraterrestrial intelligence . (CNS photo/Courtesy of NASA)

An analysis of the results of several national surveys by a University of Dayton political science professor found that Catholics are more supportive of the U.S. maintaining a leading role in probing the depths of space and the search for extraterrestrial intelligence than people of other faiths.

Political scientist Joshua Ambrosius told Catholic News Service evangelical Protestants, on the other hand, are significantly less likely than people of other faiths to see the value of the nation’s space endeavors. Evangelicals also tended to have less knowledge about space, he said.

Why evangelicals are less supportive of the various facets of space exploration is uncertain, but having grown up in an evangelical family, Ambrosius said he can understand some possible reasons.

“In my family, there wasn’t a lot of discussion about science and its relevance. I had influences that would question the findings and contributions of modern science, particularly the view of evolutionary origins (of humans). I grew up in a church and a tradition very oriented around creation science. It wasn’t until I was an older teenager and in college (that) I turned to accept the scientific explanation of evolution,” he said.

He analyzed data from the 2010 General Social Survey of the National Opinion Research Center at the University of Chicago; the June 2011 Political Survey of the Pew Research Center for the People and the Press; the April 2010 Political Future Survey and the spring 2009 General Public Science Survey. He broke down responses from Catholics, evangelicals, mainline Protestants, Jews, Eastern religions and people with no religion.

“Evangelicals express significantly higher expectations that an asteroid will hit earth, but significantly lower expectations of the discovery of life off the earth,” he said in his report, “Separation of Church and Space: Religious Influences on Support for Space Exploration Policy.”

Ambrosius presented his report in November at the Society for the Scientific Study of Religion conference in Indianapolis.

Evangelicals also are more certain that Jesus will return in the next 40 years than they are that humans will make significant progress in space exploration during that time, Ambrosius wrote.

For Catholics, the depth of the practice of their faith does not seem to matter when it comes to supporting the country’s space program. Ambrosius’ analysis found that there was no difference in the support of space exploration between Catholics who attend Mass weekly and those who attend less often.

The political scientist said he planned to look at the connection between the teachings of evangelical leaders and views of people in the pews regarding space.

“There seems to be a role that church leaders, particularly among evangelicals, play in developing space policy and space exploration,” Ambrosius explained.

The findings are significant because evangelical Christians could influence policymaking when it comes to funding space exploration. Evangelicals comprise about 26 percent of the U.S. population, according to the Religious Landscape Survey of the Pew Research Center’s Religion and Public Life Project, and if they are elected to policymaking positions, they could affect federal spending on space exploration and research into the possibility of colonizing other planets, Ambrosius said.

“Definitely the space community needs to build upon this interplay of outreach to religious publics,” he added.