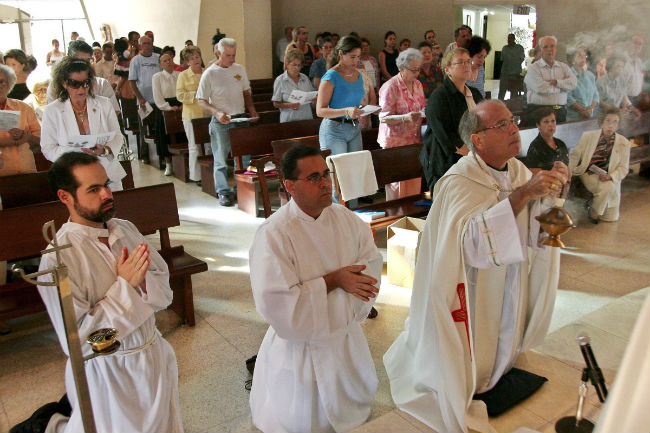 In this Aug. 6, 2006, file photo, Msgr. Felipe Estevez blesses the altar with incense during a vigil for Cuba at the Santuario Nacional Ermita de la Caridad in Miami, Fla. The demographic changes affecting Catholics in the United States have become a rea lity for the nation, with the growing number of Hispanics. (CNS photo/John Riley, EPA)

WASHINGTON (CNS) — Catholics in the United States have been told frequently over the past decade or more about the demographic changes coming to the makeup of their church — especially with the growing number of Hispanics now living in the U.S.

Now, however, it’s the United States’ turn to recognize and deal with the emerging reality of demographic change.

In a Dec. 15 program at the Brookings Institution, Brookings senior fellow William Frey, a demographer and trend-spotting expert, outlined some of the truths that can be gleaned from U.S. Census data that appear in his new book “Diversity Explosion.”

For one thing, a majority of Americans in all races and ethnic groups now live in the suburbs, not in the central cities. This was true of Asians by the 1990 census, and of Hispanics in the 2000 census. The 2010 census showed that 51 percent of all African-Americans now live in suburban jurisdictions.

More telling details lie in the migration of Hispanics within the United States. Frey identified 145 U.S. communities that show a large influx of Hispanics where previously there had been relatively few. He also found another 44 communities where Hispanics already having a significant presence, but large numbers are headed there, and 43 more where Hispanics are a considerable portion of the population but where growth is more modest.

Many of these communities were in the coastal and southeastern portions of the United States. Very few regions were exempt from this growth in Hispanic population; New England was one part of the country that was host to none of these Hispanic population trends.

Enrique Pumar, chairman of the sociology department at The Catholic University of America, Washington, and a fellow at its Institute on Policy Research & Catholic Studies, told Catholic News Service that Frey failed to mention “racial tensions that initially erupt in many areas that were traditionally dominated by one group, and we have newcomers who are moving there, and they don’t know quite well what to make of it.”

He cited Greensboro as just one of many cities throughout North Carolina now undergoing these tensions, and suggested that post-Katrina New Orleans could be such a site in the future.

Ronald Brownstein, political coverage coordinator for Atlantic Media, noted a more current trend: “This is the first school year where a majority of the K (kindergarten) through 12 (12th grade) population is not white,” he said at the Brookings briefing.

How the country responds to these demographic changes, both in policy and in politics, will determine the direction of the United States in the generations to come.

Frey said he is optimistic about the ability of Americans to adapt to these changes, adding that Americans’ self-interest will guide the nation.

Brownstein sees the potential for trouble ahead. He points to the current deadlocks in Congress.

Brownstein said the dividing lines are clear in the political arena. Republicans have become the party of whites; 90 percent of Mitt Romney’s votes in his 2012 presidential bid came from whites. On the other hand, the last Democrat to win the White House with a majority of white support was Lyndon Johnson in 1964, although a majority of working-class whites supported Democratic candidates through Walter Mondale’s unsuccessful bid in 1984. By the same token, President Barack Obama is the first president to win the presidency while losing among whites by 10 percentage points or more. In 2008, he lost by 11 percent; in 2012, by 20 percent.

Pumar subscribes to the notion that all politics is local.

“Realignment depends a lot depends a lot on local conditions,” he said. “Hispanics and minorities don’t tend to vote. They don’t think to register. If they do, they don’t come out and vote to their full potential.”

Given Obama’s executive orders in November on immigration policy, “to what extent there is political realignment, a lot depends on the local population dynamics,” Pumar told CNS. “It tends to favor the Democratic Party, but the Democrats shouldn’t take this vote for granted.”

And how Americans treat their neighbors, “that really is the $10 million question when we talk about race and ethnic relations,” Pumar said. “These tensions are resolved very easily in some cases. In other cases, the tensions are not resolved that easily.”

“For instance, in this area of D.C., you have an area like Arlington County (Virginia), where they actually pride themselves on being multiracial. Then you have a city like Manassas (Virginia), which was very supportive of kicking Hispanics out and them moving to other cities. It’s very difficult to generalize, to be honest with you.”