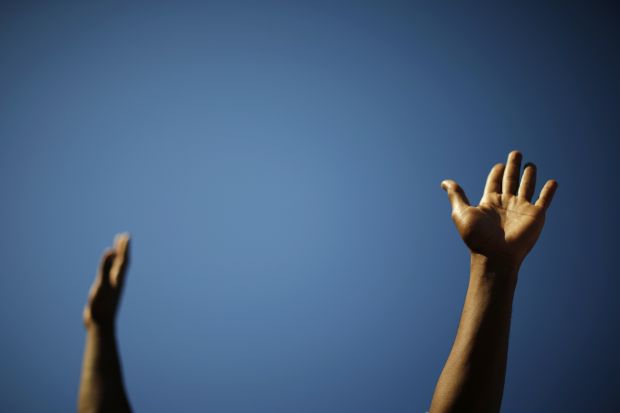 WASHINGTON (CNS) — This year the “hope for a just peace” that is Advent “must face the flagrant failures of a nation still bound by sin, our bondage to and complicity in racial injustice,” said a group of Catholic theologians.

“The killings of black men, women and children … by white policemen, and the failures of the grand jury process to indict some of the police officers involved, brought to our attention not only problems in law enforcement today, but also deeper racial injustice in our nation, our communities and even our churches,” they said.

By midday Dec. 10, more than 310 theologians from all over the United States had signed on to the statement posted on the website www.catholicmoraltheology.com, which is a project of North American Catholic moral theologians.

The Dec. 8 statement was issued in response to, among other incidents, the decision by grand juries in Missouri and New York not to indict white police officers in the deaths of two African-American males — the shooting death of Michael Brown in Ferguson, Mo., and the chokehold death of Eric Garner on Staten Island, New York.

Garner’s final words, “I can’t breathe,” continue to be chanted in the streets by protesters around the country, the theologians noted. His words, along with “Jesus breathing on his disciples, telling them, “Peace be with you,’ gives his disciples, then and now, the power and obligation to raise our voices” for a just peace, they said.

Quoting from the Rev. Martin Luther King Jr.’s 1963 “Letter from a Birmingham Jail,” the theologians said his words resonate as much today as they did then. “The ‘cup of endurance runs over’ again for African-Americans and many others of good will. Our streets are filled with those exhausted by the need to explain yet again ‘why we can’t wait’ (for justice).”

Rev. King, they said, “challenged ‘white moderate’ Christians for being ‘more devoted to order than to justice’ and for preferring ‘a negative peace which is the absence of tension to a positive peace which is the presence of justice.'” Pope Francis, too, has warned “of the explosive consequences of exclusion and fearful seeking of ‘security’ based on such a negative peace,” the theologians said.

“As Catholic theologians, we wish to go on the record in calling for a serious examination of both policing and racial injustice in the U.S.,” the statement said. “The time demands that we leave some mark that U.S. Catholic theologians did not ignore what is happening in our midst — as the vast majority sadly did during the 1960s Civil Rights movement.”

Among other actions the theologians said they would:

— “Examine within ourselves our complicity in the sin of racism and how it sustains false images of white superiority in relationship to black inferiority.”

— “Fast and to refrain from meat on Fridays during this Advent season and through the seasons of Christmas and Epiphany, as well as during Lent, as a sign of our penitence and need of conversion from the pervasive sin of racism.”

— “Commit ourselves to placing our bodies and/or privilege on the line in visible, public solidarity with movements of protest to address the deep-seated racism of our nation.”

— “Commit ourselves to further teaching and scholarship on racial justice. Our faith teaches us that all persons are created in the image of God and have been redeemed in Christ Jesus.”

The theologians said they support police, “whose work is indeed dangerous at times,” but called for “a radical reconsideration of policing policy in our nation” and “an end to the militarization of police departments.” “We support instead the proven, effective results of community policing.”

They urged “a honing of the guidelines for police use of lethal force so that they are uniform in all states … and so that the use of lethal force, echoing Catholic teaching on ‘legitimate defense,’ is justified only when an aggressor poses a grave and imminent threat to the officer’s and/or other persons’ lives.”

The group said it supported calls “for better recruiting, training and education” for all police so they will truly “serve and protect” their communities.

The theologians said establishing a Truth and Reconciliation Commission is necessary to examine racism in the United States. They called for appointing independent special prosecutors to look into police shootings, since dissatisfaction with the grand jury system is “widespread.” The group also said the U.S. Department of Justice must investigate whether excessive use of force is a pattern for some police departments, such as in Ferguson and New York City.

“We call upon our bishops to proactively proclaim and witness to our faith’s stand against racism,” the group said. “They have authored pastoral statements in the past, and these documents need to be revisited — in parishes, dioceses, and seminaries — and brought to the forefront of Catholic teaching and action in light of the present crisis.”

Among the U.S. bishops’ documents is their 1979 pastoral letter “Brothers and Sisters to Us,” which said that “racism is a sin: a sin that divides the human family, blots out the image of God among specific members of that family, and violates the fundamental human dignity of those called to be children of the same Father.”

The theologians prayed that “all of these actions will move us closer toward the fulfillment of the hope of the Advent season, toward a time when ‘love and truth will meet; justice and peace will kiss’ (Psalm 85:10).”

NEXT: Meet the priest who penned the lyrics for World Meeting of Families hymn