Christmas decorations inspire everyone, even nonbelievers, to love 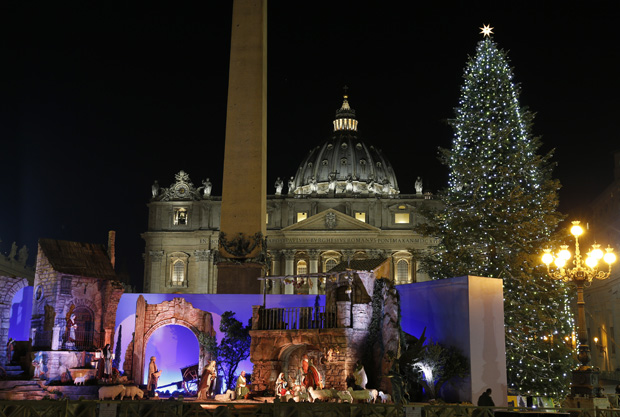 The Christmas tree and Nativity scene decorate St. Peter's Square at the Vatican after a lighting ceremony Dec. 19. New LED lighting was also unveiled on the facade and dome of the basilica during the ceremony. (CNS photo/Paul Haring)

VATICAN CITY (CNS) — God did not come to the world with arrogance to impose his might; he offered his powerful love through a fragile child, Pope Francis said.

The Christmas tree and Nativity scene are reminders of this mystery of the Incarnation and they both carry “a message of light, hope and love,” he said Dec. 19, meeting the people who donated the centerpieces of the Vatican Christmas decorations.

The Italian city of Verona donated the Nativity scene, and the southern Italian city of Catanzaro donated the 82-foot white spruce tree, which both adorn St. Peter’s Square. The tree was lit and the scene officially unveiled during an early evening ceremony in the square Dec. 19.

Earlier in the day, the pope thanked the delegates for their generosity and highlighted the importance of the Christmas creche and tree for Christians, as they are a sign of how “God made man to save us and the light that Jesus brought to the world with his birth.”

But the Nativity scene and Christmas tree touch the hearts of everyone, “even those who do not believe because they speak of fraternity, intimacy and friendship, calling all people of our time to rediscover the beauty of simplicity, sharing and solidarity,” he said.

“They are an invitation to unity, harmony and peace; an invitation to make room — in our personal and social life — for God, who did not come with arrogance to impose his might, but offers us his omnipotent love through the fragile person of a child,” he said.

“Let us follow him, the true light, in order to not lose our way and to reflect, in turn, light and warmth upon those who are going through difficult and dark times,” he said.

A choir from Serrastretta near Catanzaro and the band of the Vatican gendarme corps were to provide traditional Christmas music, both sacred and popular, during the lighting ceremony.

After the Christmas lighting, Vatican officials were scheduled to flip the switch for the new 315-bulb LED lighting on the facade and dome of St. Peter’s Basilica. The Vatican said the new bulbs should save about 70 percent on the basilica’s lighting bill. A similar system, also set for its first illumination Dec. 19, was installed at Rome’s Basilica of St. Mary Major.