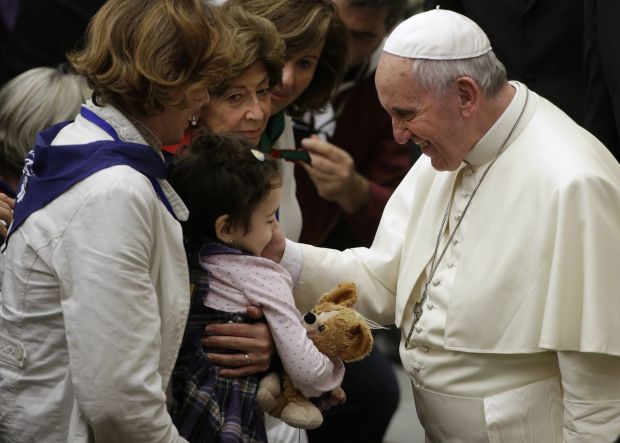 Pope Francis greets a child as he arrives to lead a special audience for members of the Schoenstatt religious movement at the Vatican in this Oct. 25 file photo. (CNS photo/Max Rossi, Reuters)

VATICAN CITY (CNS) — Becoming a mother or father is a gift from God, but women and men have a duty to embrace that gift and be astonished by its beauty, Pope Francis said.

When people recognize that every child is unique and wanted by God, they will be “amazed by what a great miracle a child is,” he said Dec. 28, the feast of the Holy Family.

During an audience with an Italian association for large families, the pope said, “Dear parents, I am grateful for the example of your love of life that you safeguard from conception to its natural end, even with all of life’s difficulties and burdens, which unfortunately the government doesn’t always help you bear.”

The pope greeted the multiple generations present at the audience, who came from all over Italy, as well as other parts of Europe, and asked them how early they had to get up that morning to get to the Vatican.

“Six o’clock? Five o’clock? Aren’t you tired? Well, I’ll put you to sleep with my speech!” he joked.

Holding the Holy Family of Jesus, Mary and Joseph up as a model for all the world’s families, the pope said, “maternity and paternity are a gift from God, but welcoming that gift, being astonished by its beauty and making it shine in society, that is your task.”

“Each one of your children is a unique creature who will never be repeated in the history of humanity,” he said.

“A child is a miracle” that changes the lives of his or her parents, he added.

While each family is “a cell” that together builds the body of society, large families are “a hope for society,” he said, they are “richer, more alive,” and governments should recognize the importance of “investing in” large families.

He asked that Italy, with its low birthrate, pay greater attention to creating and carrying out policies that offer real support for families.

The pope, who is one of five children, said having lots of siblings “is good for you” and better equips new generations with what it takes to share and be united, which is especially needed “in a world often marked by selfishness.”

Just a bit later in the day, the pope again highlighted the family, especially the role grandparents play, before praying the Angelus with visitors gathered in St. Peter’s Square.

Close loving relationships between the younger and older generations are “crucial” for both society and the church, he said.

The Holy Family is a simple but powerful model as it radiates “a light of mercy and salvation for the whole world, the light of truth for every human being, for the human family and for individual families,” he said.

That light “encourages us to offer human warmth” to those families that, for whatever reason, are struggling with “a lack of peace, harmony and forgiveness,” he said.

When parents and children live out their faith together, “they possess an energy that allows them to face even difficult trials, as the Holy Family’s experience demonstrates,” for example, in their flight to Egypt, he said.

People should be reaching out with concrete support to families, “who are living through more difficult situations because of illness, lack of work, discrimination, the need to emigrate,” the pope said. He then led those gathered in the square for a moment of silence and prayer for all families who are facing hardship.