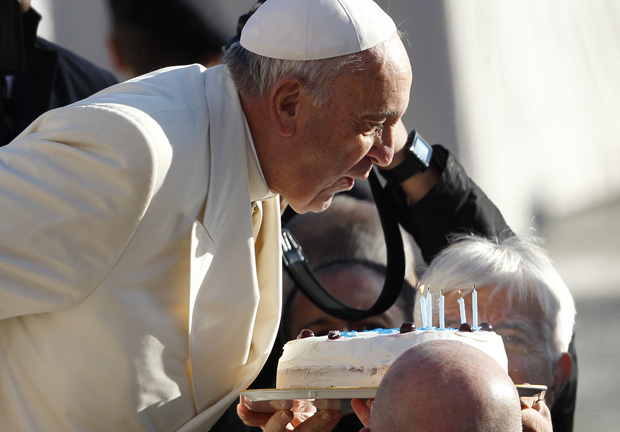 Pope Francis blows out candles on a birthday cake given by a seminarian of the Legionaries of Christ as he arrives to lead his general audience in St. Peter's Square at the Vatican Dec. 17. The pope turned 78. (CNS photo/Paul Haring) 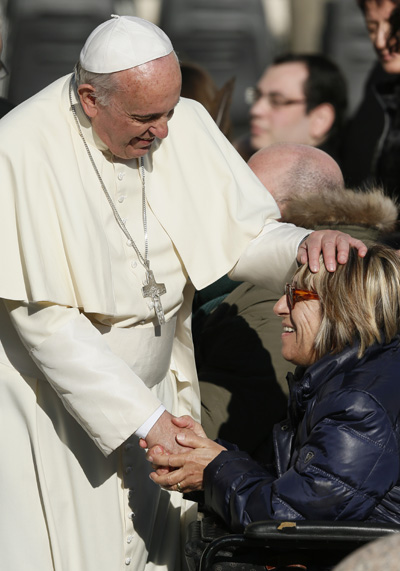 Pope Francis greets a woman as he meets the disabled during his general audience in St. Peter’s Square at the Vatican Dec. 17. (CNS photo/Paul Haring)

VATICAN CITY (CNS) — At his last weekly public audience of 2014, Pope Francis started a series of talks on the family with a reflection on the Holy Family of Jesus, Mary and St. Joseph as a model for all Christian families.

The pope spoke Dec. 17 after getting cheers, balloons and even a birthday cake as he arrived for the audience that coincided with his 78th birthday. He said his remarks were first of a series in preparation for the October 2015 Synod of Bishops on the family, which he described as the conclusion of a process begun at the October extraordinary synod on the same subject.

“I have decided to reflect with you, in this year, on the very subject of the family, on this great gift that the Lord has given the world from the start, when he gave Adam and Eve the mission of multiplying and filling the earth,” the pope said.

The series of talks, which the pope announced at the previous week’s audience, Dec. 10, could amount to the most extensive papal teaching on the subject since St. John Paul II gave more than 120 audience talks on human sexuality, later compiled as his “theology of the body.”

If the first installment of Pope Francis’ talks is indicative, they will be in his usual conversational and folksy style, in contrast to the philosophical meditations of St. John Paul.

In the talk, delivered a week before Christmas Eve, Pope Francis reflected that God chose to become man not “spectacularly, or as a warrior, an emperor” but as the son of a “pious and hardworking Israelite family” in a “forlorn village on the periphery of the Roman empire.”

Noting that the Gospels offer no details on Jesus’ youth and upbringing, the pope imagined the Holy Family’s daily life: “The mother cooked, kept house, ironed the shirts, did all the work of a mom. The dad, a carpenter, worked, taught his son to work.”

“It is not difficult to imagine how much moms could learn from Mary’s care for that son, and how much dads could benefit from the example of Joseph, a just man, who devoted his life to supporting and defending his child and wife, his family, in difficult periods.

“Not to speak of how much the adolescent Jesus might encourage kids to understand the necessity and beauty of cultivating their deepest vocation, and of dreaming big dreams,” Pope Francis said.

“The family of Nazareth calls on us to rediscover the vocation of the family, of every family,” the pope said: “to make love normal instead of hate, to make mutual assistance a common thing, rather than indifference or enmity.”

“This is the great mission of the family: to make a place for Jesus when he comes, to welcome Jesus in the family, in the form of children, husband, wife, grandparents,” he said. “Jesus is there. Welcome him there, that he might grow spiritually in that family.”